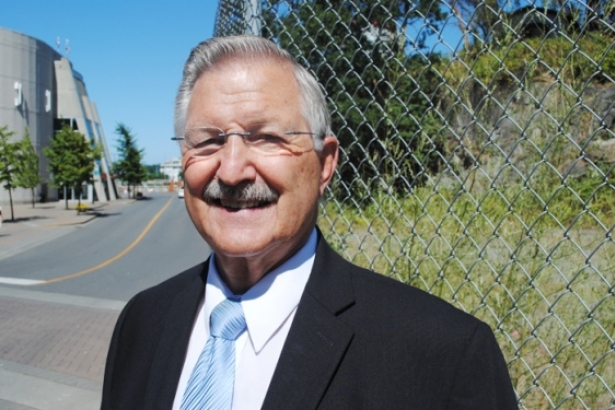 It's only one of nine proposed sites to host a possible Metro Vancouver garbage incinerator, but even before a final decision is made, local activists, residents and politicians are demanding answers about a very controversial plan.  21st in the series.

From its forested mountain backdrop to the panorama of snow-capped Coast Mountains, Nanaimo is a classic West Coast community, “offering natural beauty at every turn”, according to the city’s tourism department.

What you don’t see under this scenic surface is the  rage simmering over a proposal to barge garbage from the Vancouver to burn in a proposed incinerator at Duke Point in Nanaimo.  As one Nanaimo councillor put it, "we've been hammered with emails from people furious that this is even being considered."

“I’ve called upon Metro Vancouver to say that we are really taking a beating here from those opposed to the project,” said Nanaimo Mayor John Ruttan. “Could you please tell us what is happening and where are we, and is Nanaimo still in the decision process? And in the absence of getting any meaningful dialogue going with them, it’s left us at the brunt of the storm. Metro Vancouver has done nothing to alleviate the concern. Nothing.“

The image of Nanaimo promoted by the city's tourism dept.

“People are very, very upset," said Carla Stein with the Sierra Club of Nanaimo. " We have one of the most pristine airsheds in the region. A lot of people have moved over here from Vancouver and other areas specifically because they want a less polluted environment.”

Anger erupted last fall when the Metro Vancouver regional authority announced six potential sites for a waste-to-energy incinerator to handle greater Vancouver’s future garbage. One of those proposed sites is in Nanaimo, on Duke Point, a spit of land directly across from the downtown core, south of the ferry terminal and one kilometer from Gabriola Island. The industrial zone is already home to the Harmac Pacific pulp mill and the smells of an animal rendering plant run by West Coast Reduction.

“I live 35 kilometers away. When the Harmac plant started up, I could smell it on certain days,” said Joe Stanhope, the chair of the Regional District of Nanaimo. “We treasure the environment. The RDN has made major strides in environmental issues with a very high recycling rate. It seems a travesty that we are doing such a good job on our own solid waste and then to have this kind of a proposal sitting on our left hand. It’s not a good thing.”

The Nanaimo barge/incinerator plan is one of nine bids in front of the Metro Vancouver regional authority as it wrestles with a growing garbage problem. The greater Vancouver region is expected to grow by one million people by 2035, adding an additional 700,000 tonnes of garbage to the 1.5 million tonnes produced now. Under a solid waste plan approved in 2011, the authority hopes to recycle and divert up to 80 per cent of the garbage generated in the region. That still leaves 700,000 tonnes of garbage that must be dealt with. In 2009, the authority voted to build a new incinerator, either within the Metro Vancouver region, or outside the region, in communities like Nanaimo.

“We believe we have a fantastic site,” said Mark Swartz, the business development manager for the US waste-to-energy giant Wheelabrator Technologies.  Wheelabrator has teamed up with marine transportation company Seaspan, a member of The Washington Group and a Spanish environmental firm to promote the Nanaimo site.

Under Metro Vancouver bidding rules, companies are discouraged from speaking publicly about their proposals.  Aquilini Renewable Energy is also one of the incinerator proponents, but when contacted about their proposal for Port Mellon on the Sunshine Coast, an official told The Vancouver Observer, “As we are a qualified bidder of the Metro Vancouver process we are not able to comment on any aspect of the project at this time.”

Wheelabrator, however, has not been as inhibited with their comments.  Their proposal has run into a wall of opposition from the local regional authority, the Nanaimo city council, local environmental groups and citizens around the region.  It’s left the incineration team scrambling to find someone they can talk to. Company officials from Wheelabrator and Seaspan have been trying to meet with groups and individuals for months, including a request for a rare in-camera meeting with the RDN board.

“There have been a number of insider-only meetings that the incinerator proponents have hosted,” said Carla Stein. “I understand they've been going around inviting RDN directors and councillors to meet them in private too, which seems highly underhanded. This should be a public debate.”

Mark Swartz denies there have been any underhanded tactics used to market the Duke Point incineration proposal.

“We’ve been pretty above-board and transparent with everybody we’ve been talking to in Nanaimo for the last six to eight months. When you go to a board meeting and you request a delegation, you get 10 minutes to stand before the board and all the public to state your case. A project of this magnitude, with all the moving parts and all the players, takes a lot more than 10 minutes to have a good presentation on the who, where, why, how and when regarding a project of this scope.”

“We are in the business of going after these types of projects, so if there is also a communal site closer to Vancouver that is put forward and stays available to all (incinerator) proponents, we will put in for that site as well,” said Schwartz.

Schwartz says the Duke Point site is ideally situated to accept waste from not only Vancouver, but also other communities around Vancouver Island who are currently shipping their garbage elsewhere.  Schwartz says a new incinerator would likely be designed so it can be scaled-up if needed.

At this point however, there are far more questions than answers about the Duke Point incinerator proposal. And residents, environmental groups and city council want answers.

“Who’s responsible? Are we supposed to look to Metro Vancouver or do we look to the proponents to do it?” said John Ruttan.

The City has asked Metro Vancouver to come to explain the proposal to residents and council. Metro Vancouver has requested a public meeting with the board for May 15, once the list of potential incinerator sites has been decided.  John Ruttan says he expect a raucous meeting. “I can tell you it’s going to be a hornets’ nest for whoever chooses to do it,” he said.