A taste of Burnaby Mountain: mud, climate change, and history in the making 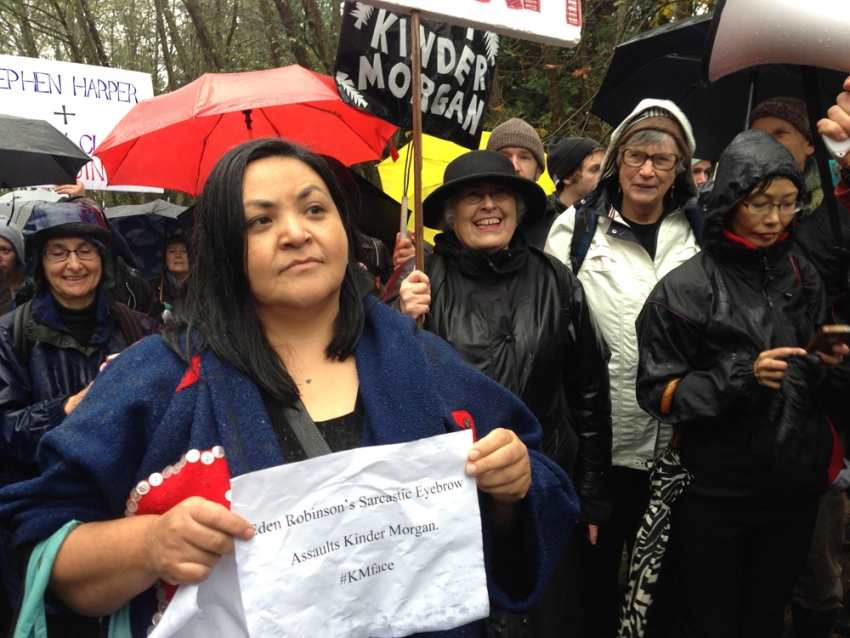 As the protesters wait for Sut-Lut's blessing, Eden Robinson gives Kinder Morgan her sarcastic eyebrow. Al photographs in this piece are by Carrie Saxifrage.
Previous story
Next story

Each day on Burnaby Mountain is a morphing creature that slowly gains shape. Then it recreates itself all over again because circumstances have changed. There are consistencies: deep mud, moments of confusion, courage, grace, tears in the eyes and a sense that history is being made. The goal is to stop the Kinder Morgan pipeline from transporting bitumen from Alberta's tar sands to Vancouver's coast. The plan to "twin" the Trans Mountain pipeline has been controversial since it was first proposed.

On Tuesday morning, I climbed up from Ridgeview Drive on a grey pebble path to the soggy encampment of blue tarps in the pouring rain. The scene was an amazing B.C. snap shot. Three people sat cross legged in meditation at the edge of the police barrier. Inside the barrier, two First Nations men worked on a totem pole next to a chain link fence that protected the core driller, which looks like a well drilling rig. Along the perimeter a yellow “Caution” tape ran parallel to the police barricade tape. On it hung bright pink signs that read “Climate crime scene.”

The people who had decided to be arrested that day identified themselves. They went to a different group where they were briefed regarding the sequence of events that had occurred on other days: the ride in the paddy wagon to the Burnaby RCMP station at Deer Lake; the few hours alone in a chilly cell wearing the one layer of clothing that was allowed; the likelihood of a hearing date on January 12. People who hadn’t brought their ID or had plans for mid-January dropped out. Seven remained.

Activists from Clayoquot Sound described the consequences of their arrests over the years: they travel freely to the U.S. and abroad; they haven’t had difficulty getting jobs; it doesn’t show up on criminal record checks. Technically, two years in jail is possible but no one has served anywhere near that time. Some leaders got a few weeks of jail time and many got fines or community service. “We can only tell you about similar events in the past,” someone else said. “Only you will bear the consequences of this decision.”

The main group had swelled to about one hundred people. They marched up the hill with an air of diligent resignation that these were the tools that remained to them as citizens.

Eden Robinson, author of Monkey Beach, suddenly appeared in a button blanket, full of power and good cheer, with a sarcastic eyebrow for Kinder Morgan, a bag of food for people at the camp and a poem to read.

Then Sut-Lut appeared, in a warm brown coat and with a young child in tow. She stood behind the line that we weren’t allowed to cross, in among the RCMP officers.

When Sut-Lut began to sing and beat her drum, she turned slowly and sang to the crowd on the road, to the people watching from the mud path above, to the elders carving a totem pole, to the core drillers and to the RCMP. We were together in that moment.

One by one, the citizens walked across the line. Each one turned to say their name to the crowd and receive cheers and applause before ducking under the police barricade ribbon and into the hands of the RCMP. Each person did what they needed with a certain etiquette.

Later, we stood for hours in the rain outside the RCMP office, waiting for the seven arrested that day to emerge. An off duty officer stopped to chat. Everyone agreed that the day’s events had been positive, that the animosity between protestors and the RCMP had substantially lightened or even disappeared. “It’s a relief,” the officer said. “This is very complicated for the City of Burnaby. On the one hand, it’s paying for the appeal of the NEB ruling and on the other hand it’s paying the RCMP officers to enforce the injunction so that Kinder Morgan can drill there. It’s not simple for the people involved.”

As the citizens emerged, I asked about who they were: a hospitality school student who plans to guide fishing trips to build employment in her First Nation; a sous chef who said he recently stopped drinking and smoking and started to notice what was going around him; a woman who had protested years ago to stop logging on Burnaby Mountain. “It’s just a relief to have done it,” she said. “I knew I had to but I was worried that I would be too scared. I feel so much freer now.”

Thursday was completely different. The drilling on the road was finished. There was talk about the invalidity of the injunction, but no one knew for sure. We walked from the camp across the lawn, with the First Nations elders drumming and singing.

Amy George, Grand Chief Stewart Phillips and other First Nation elders disappeared down a steep path with patches of shin high mud to the remaining drill site while young people ran ahead, moving packing crates in front of them to secure their footing. The Sojourners sang on the lawn above. Following the elders, more than two hundred people slowly snaked through the woods and then stood in the mud. The faith leaders and others who had decided to be arrested held off so that the processing of the First Nation elders would not be delayed.

“Success is the progressive realization of a worthy ideal. I want to be successful.”

“I practice every day. Kung Fu for life!”

“I’m doing this for every gender and every sexual preference. I want to be able to say that we have not left a mark that is undoable. We can stand here today and leave a mark of positive change.”

The young men were eloquent as well:

The arrests concluded with announcements: professors from UBC and SFU are going to be on the mountain Friday, some in full academic regalia, to make the point that action is necessary based on what we know. On weekdays, people gather at the Burnaby Mountain Conservation Sign on Centennial Way at 10:30 am, 12 on the weekends.

That’s where each day’s creature begins to take shape.

Part 2: A Taste of the NEB Hearing Room in Victoria