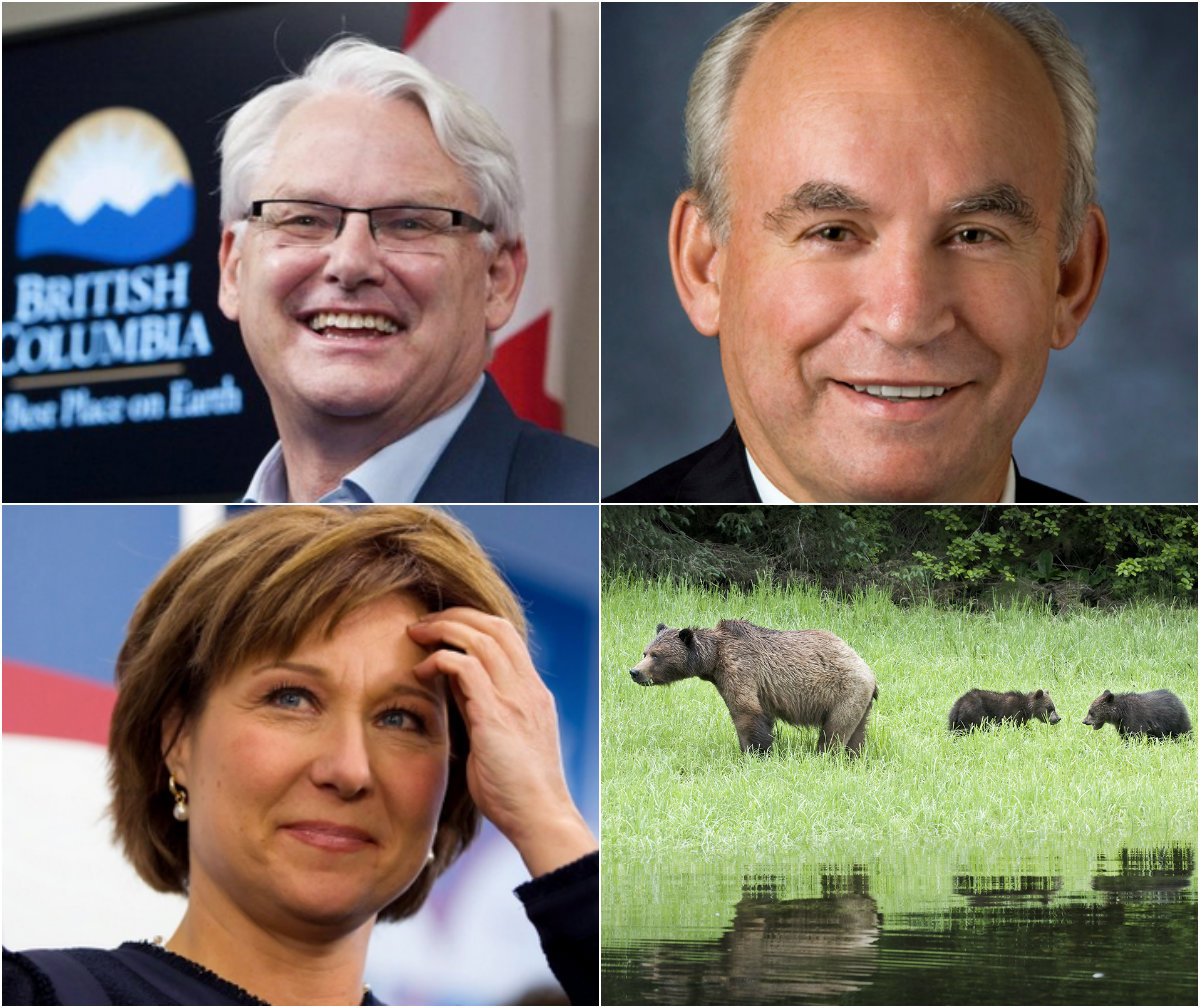 Despite "overwhelming" evidence that grizzly hunting is unsustainable, political influence keeps it going.

Kootenay East MLA Bill Bennett has been outspoken about his support for grizzly hunting, ever since his election in 2001.

Currently Minister of Energy and Mines, Bennett was front and centre during December’s permit-allocation controversy.

When the government announced it was going to lower the number of permits available for local hunters so more could go to non-residents who come to B.C. to hunt with hired guides— there was a public outcry loud enough to make Bennett backtrack.

“This is not going to end in a good place for the BCWF if the membership continues to attack Steve and I personally,” Bennett wrote on an accidentally public Facebook post in December. He was apparently referring to the criticism he and Minister of Forests, Lands, and Natural Resource Operations Steve Thomson were receiving from upset resident hunters.

“Frankly Steve doesn't need the votes to get elected and I’m not running again so all the threats don't mean sh*t to us,” he continued.

Bennett later apologized for the message and admitted the Liberal government didn't get the new hunting policy “quite right”.

A provincial politician, who requested to remain anonymous because of concerns about the consequences of speaking publicly about Bennett, told The Vancouver Observer that Bennett often interferes on decisions that affect the grizzly bear hunt.

“He runs this valley,” the source said.

Bennett is also still linked to an outfit called Height of the Rockies Adventure Co. Ltd., a company that took clients hunting for grizzly bears, black bears, cougars, deer, elk, mountain goat, moose, and wolves in Kootenay region, according to the 2011 Ministry of Environment guide report.

When The Vancouver Observer contacted the Ministry of Forests, Lands, and Natural Resource Operations and asked for current harvest records for the Height of the Rockies guiding territory (MU 4-25), the communications staff asked in response:

“Is there something specific about the guide you mentioned? Are you looking at a specific angle about MU4-25? What’s the angle? Is it a particular species?”

Bennett sold his shares in the business before running for election in 2001, but the company didn't have enough money to pay back a loan he made to the company, he said.

“I would have been really happy if they had paid me what the company owed me, a shareholder loan of about $65,000, give or take. But they didn't have the money and they still don't have the money,” Bennett told Larry Pynn at the Vancouver Sun in 2013.

But one source thinks that is just a convenient excuse for someone trying to hold their position in the company.

“That is bullshit, they are dentists!” the source said, referring to the owners of Height of the Rockies Adventure Co.

The owners do, meanwhile, have enough money to donate to the Liberals. One of the partners in the company, a Cranbrook dentist named C. M. Callen, donated $1,000 to the B.C. Liberal Party in 2008.

The assets of the company are now in the process of being sold, Bennett said in a statement to The Globe and Mail in January.

“If the sale goes through, I hope to recover a small portion of my original investment and will of course report that amount to the Conflict of Interest Commissioner's office when and if I ever receive it," he said.

Bennett was contacted for an interview, but did not respond.

"Sometimes we bury our heads in the sand"

In February of 2001, the NDP instated a three-year moratorium on grizzly bear hunting in B.C. When former Premier Gordon Campbell took office later that year, he made scrapping the moratorium a priority.

Despite the fact that close to 90 per cent of the B.C. public opposes hunting grizzly bears for their heads and hides, since Campbell's election, the province has supported trophy hunting.

The NDP stopped the grizzly hunt because they believed the research informing healthy management of the bear population simply didn't support it, former Premier Ujjal Dosanjh told The Vancouver Observer.

"The scientific evidence was overwhelming that we were diminishing the grizzly population," Dosanjh said, noting that representatives of rural Northern and Interior regions nevertheless felt strongly about maintaining the hunt.

A moratorium was the right move economically too, he said. “It made sense to me that tourism generally without the hunt would far outweigh financially any money hunters bring in. I felt very strongly that I should do the right thing there, not necessarily the most popular thing politically for the North and Interior,” Dosanjh said. “I lost a cabinet minister on that.”

“The time has come to recognize that we shouldn't be short-sighted in the way we grow and develop our economy,” said Dosanjh. “Sometimes we bury our heads in the sand and aren’t prepared to acknowledge that we need to move on in life.

When the late B.C. government biologist Dionys de Leeuw distributed his analyses of grizzly bear management in 2001, he was hoping to discuss his findings with colleagues in the provincial Ministry of Land, Air and Water Protection to help create better policies around hunting.

Instead, his widow, Mary, said, his work was allegedly confiscated and he was suspended without pay.

“They got him on the clause of loyalty to the Crown,” she said of her husband’s suspension. “If you disagree with anything your seniors say you are not being loyal and that’s the end of it.”

When contacted for comment, a Ministry of Land, Air and Water Protection spokesperson said it was difficult to verify because it happened years ago, and that even an FOI request may not be able to reveal personal information on a former government employee.

In his 2001 paper, Conflicts and Interests in British Columbia Bear Management, he tried to shed light on a management bias within the provincial government that he said favoured hunters— because many in policy-making positions were themselves hunters or were associated with hunting-guide operations.

“Hunters and anglers, unlike other environmental groups, are seldom seen to lobby for their interests from outside the government. They are able to do so most effectively from within the government,” wrote de Leeuw in his report.

Paul Paquet, a senior biologist for Wildlife Canada, shared many of de Leeuw’s concerns about a political culture that compromised grizzly bear management in B.C., and the two often met to discuss the situation. Paquet, along with a panel of other Canadian scientists, was appointed to a grizzly bear scientific advisory committee by the NDP provincial government in 1993.

“We frequently exchanged ideas and research findings, including drafts and revisions of the two primary papers concerning grizzly bear management,” Paquet said of his relationship with de Leeuw. “His critiques and findings were supported by the first Grizzly Science Advisory Committee, much to the consternation of the NDP government, which lobbied our committee to change our position.”

The Grizzly Science Advisory Committee was established to help with a redirection of grizzly bear conservation in B.C.— a modernization of management tactics to adjust for contemporary threats to the animal’s well-being.

The advisory panel conducted extensive research and provided the government with technical recommendations on how to better protect threatened grizzly bear populations, but nothing substantial had changed.

“The changes didn't go as far as they should have. Politics became quite involved,” Paquet said.

“And ultimately we were dismissed for being 'intemperate.' That was really the wording that was used. That was interesting.”

“It seems irrational,” executive director of the Raincoast Conservation Foundation Chris Genovali said, when asked about the province's apparent siding with small, special interest groups over the public. “Why does the grizzly hunt continue in the face of all the opposition and evidence that argues to the contrary? It is political influence. I can’t think of anything else.”

Genovali and his colleagues have been working on grizzly hunting issues for over 15 years and have analyzed the hunt from every angle. Each viewpoint — economic, environmental, local, national, social — shows the hunt should be stopped, he said.

But it doesn't, because of a skewed management culture that is deeply interconnected with the hunting sector.

“There is an institutional bias because of the revolving-door relationship between the trophy hunting lobby and the ministry staff. It starts with the ministry and radiates outwards,” he said.

“Look at how quickly the grizzly hunting moratorium was abolished by Campbell. His government took power and one of the first things they did was to abolish the moratorium. And that was very telling.”