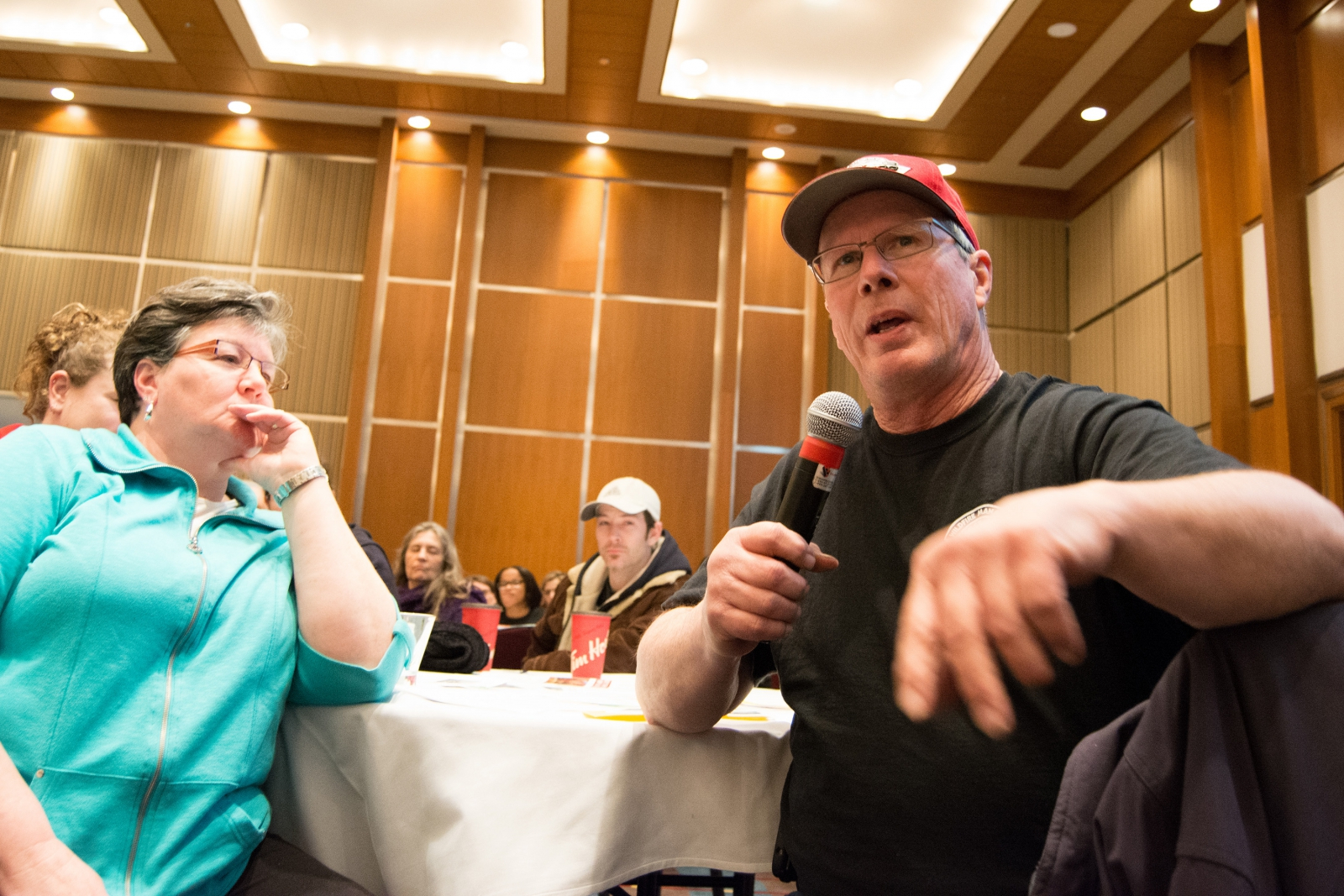 TransCanada does not "actively participate" participate in Ontario's public consultations about its Energy East pipeline, a spokesperson said.

An Ottawa public meeting about the Energy East project got heated last week when 350 citizens showed up with pointed questions about how the giant oil-sands pipeline might impact their waterways. Many were upset that they were not getting straight answers.

That might be because TransCanada says it does not actively participate in these kinds of Ontario government public consultations about its $12-billion pipeline.

The company did not take to the microphone, nor make any formal presentations. It's not even clear if its employees attended the Jan. 22 event.

That put the Ontario Energy Board, which put on the consultation, in the awkward spot of addressing the citizens' questions on the company's behalf.

“The pipeline runs through my farm,” Doug McKay said to the board's official, into the mic.

“And you’re telling me that if there is a chance of a spill, TransCanada is telling you that they’re simply just going to stop the Rideau River?”

Many others — including doctors, professors, and students — were angry about not getting answers too. Many came prepared with specific inquiries after studying the application.

"Where is this alternative source of clean drinking water going to come from in the event of an [Ottawa area] spill?” asked a young man from West Carleton.

“The application doesn’t give any specifics on that,” OEB consultant Dean Mutrie replied.

The crowd erupted in derisive laughter in response.

“We’re not buying this garbage. We’re not,” another woman yelled.

After the meeting, TransCanada was reached to explain why its officials did not appear to be around that night.

An Energy East spokesperson could not confirm if its staff were at the meeting, but he said in general, "they may not actively participate," in such Ontario Energy Board meetings about its pipeline, said Tim Duboyce earlier this week.

The Ontario Energy Board is conducting these public meetings to gather citizen views on the 4,600-km proposed pipeline, that would carry Alberta bitumen past dozens of Ontario communities.

The pipeline would slice the outskirts of Ottawa, for example, on its way to refineries and export terminals in Quebec and New Brunswick.

The board clarified that in the seven OEB public meetings so far this year across the province, the company has only sent "observers." Sometimes, company officials are identified in the crowds, and answers from the company do sometimes emerge, said the board's spokesperson.

TransCanada has conducted its own extensive open house meetings across Canada.

But some of these events have been targeted by activists and other opponents. In Kenora, for example, an 85-year-old Anishinaabe Elder yelled at TransCanada officials, in a flashmob incident that was filmed and uploaded to YouTube last August.

The Ontario board's spokesperson said it was not unusual that TransCanada was not answering the citizen's questions at the government-run consultations.

"It would have then changed the tenor of the entire discussion," said John McGrath.

"Frankly, if TransCanada was involved in the consultations, it would quickly turn into TransCanada defending its application, and the company being criticized."

Unlike British Columbia, which gave up its provincial review of pipelines to the federal government in so-called equivalency agreements, Ontario does its own double-checks.

It's an extra layer of review beyond the much-criticized National Energy Board review, which denies all participants who are not "directly affected."

But unlike the NEB, the Ontario board considers climate change.

"The approval of the Energy East project could increase oil extraction in Western Canada, leading to greater emissions," states the board's report.

It also calculated that 85 per cent of emissions from the global oil market occur long after the oil is delivered, when it is finally consumed, often as gasoline.

In the Harper government's oft-quoted statement that the oil sands produce just a tiny fraction of global emissions, the figure is low because it ignores these final emissions from tail pipes.

The OEB also wants to ensure Ontario communities and First Nations are properly consulted, and that TransCanada is addressing the pipeline's risks to Ontario's natural environment.

Regarding the oil spill plans in the Ottawa area, which was a top concern at the meeting, TransCanada told the Vancouver Observer that it promises to bring in emergency water supplies for the 1.2 million people that rely on the area's local rivers for drinking.

“Any incident happening, any waterway is bad for business,” Duboyce said.

“Our customers depend on us to transport oil and gas in a safe and reliable fashion. Our [spill] target is zero.”

He added that the company has state-of-the-art real-time spill monitoring systems.

“If [our technicians] see any kind of anomaly, the protocol is that they have a few minutes to determine that there isn’t a problem,” Duboyce said. “If they can’t, then they shut down that section of pipeline by remote control.

The Alberta-to-eastern-Canada pipeline would cross two major watersheds — the Nelson River and the Great Lakes-St Lawrence. Along the way, it would pump 1.1 million litres per day of Alberta and Bakken oil across 41 Ontario rivers, according to the company.

A recent water report by the Council of Canadians suggests that just one uncontrolled oil spill from the pipeline would release one million litres in 10 minutes.

It further calculated that a spill at the Ontario Nipigon River Crossing could leak around 11 million litres because the valve station is 11.8 kilometres away.

“The Energy East pipeline would cross some of Canada’s most precious waterways. From drinking water sources, to valued fishing, tourist and recreational waters, to a beluga habitat and the home of the world’s largest tides in the Bay of Fundy, these unique waterways would all be in danger from a pipeline or tanker spill,” the Council's report stated.

According to an Ottawa doctor who studies leukaemia and blood chemicals, any spill at all would have consequences for human health. He was disappointed the information about this did not come out at the Ottawa meeting.

“What’s going into the pipeline is very toxic, and full of carcinogens known to cause leukaemia and lymphoma,” said Dr. Richard van der Jagt, a hematologist.

“We should be trying to help environmental health. Right now, Joe Public is uninformed, and is in no position to fight this. This doesn’t help Joe Public. This helps the oil companies."

“We heard the regular talking points that we’ve all heard in the media. And we’re rather disappointed that most of our questions really were not answered. I am personally concerned that we got a lot of the same non-answers here tonight,” MacKenzie said.