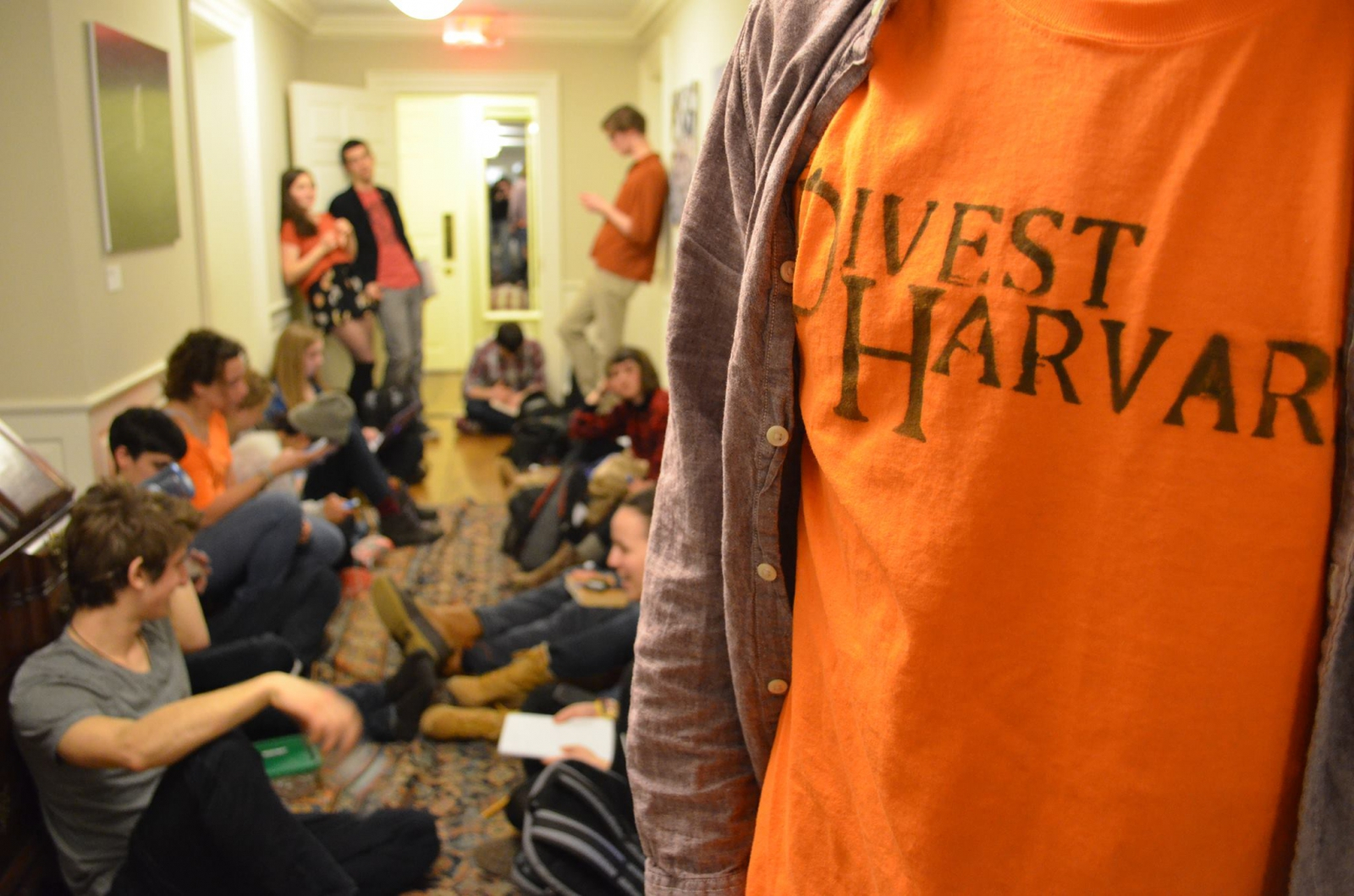 'Divest fossil fuel' campus activists from influential universities in the U.S. and Canada are doing sit-ins, protests, and legal actions, in what appears to be a coordinated set of initiatives on the eve of Global Divestment Day.

“This morning, we entered the administration main building,” said second-year Harvard law student Alice Cherry in a hushed voice. She was reached by the National Observer by phone at the sit-in inside the President's office building.

“They disagree with us. They are very intent on keeping fossil-fuel investment,” she added.

On the same morning in Toronto, divestment advocates from the University of Toronto staged a protest inside the Toronto Stock Exchange, unfurling banners that read: "Don’t Bank on Tar Sands – Divest Fossil Fuels Now.”

"Fossil fuel projects like the tar sands are history, and renewable energy is the future,” said Ben Donato-Woodger, a student organizer with Toronto350 in a release.

“Investors in Canada, like the University of Toronto, need to choose to divest from fossil fuels and invest in the clean, just energy solutions that are powering the way forward,” he said.

Both universities have sizeable endowments, and both are under increasing pressure by faculty and students to divest investments in companies in the oil, gas and coal sectors.

Faculty at the University of British Columbia voted 62 per cent in favour of divestment on Tuesday. The campus has the largest university holdings of fossil fuel investments in Canada, according to a recent national study.

Enviro-activist group 350.org, and its main campaigner Bill McKibben, have been pushing for campus divestment since 2012, stating urgent action is needed now to avoid two degrees of warming this century.

Some 90 divest-campus actions across North America are also promised on Friday, said 350.org in a release.

At Harvard, where tuition fees can exceed $50,000 USD per year, law students are now suing Harvard in attempt to force divestment.

“Although we do feel strongly that investing in fossil fuels is a violation of the university’s moral duties, we also feel that its legal duties are being violated as well,” said Cherry, who also represents Harvard Climate Justice Coalition.

She says Harvard is a charity and non-profit corporation, and to be in compliance with local state laws, it "must manage its endowment in a way that is consistent with its charter” including its “special obligation and accountability to the future, to the long view needed to anticipate and alter the trajectory and impact of climate change.”

Harvard University is seeking to have the lawsuit dismissed, and its lawyers will appear in court next week attempting do that.

A comment from Harvard University’s president about the lawsuit and today’s “sit-in” was requested, but not made immediately available.

But President Drew Faust has previously said that while she is deeply concerned about global warming, she does not believe "university divestment from the fossil fuel industry is warranted or wise."

Divestment, she said in a 2013 statement, is a “political action” and that she cannot support it. She also suggested the move is ineffective.

"Universities own a very small fraction of the market capitalization of fossil fuel companies. If we and others were to sell our shares, those shares would no doubt find other willing buyers.”

"I also find a troubling inconsistency in the notion that, as an investor, we should boycott a whole class of companies at the same time that, as individuals and as a community, we are extensively relying on those companies’ products and services for so much of what we do every day,” said Faust.

Some 230 Harvard professors have signed a petition in support of fossil-fuel divestment, and Harvard students have voted in favour of the climate change action as well.

Cherry said the "sit-in" at Harvard on Thursday appears to be working.

“It’s exciting. We have been offered a meeting with President Faust, which is progress."