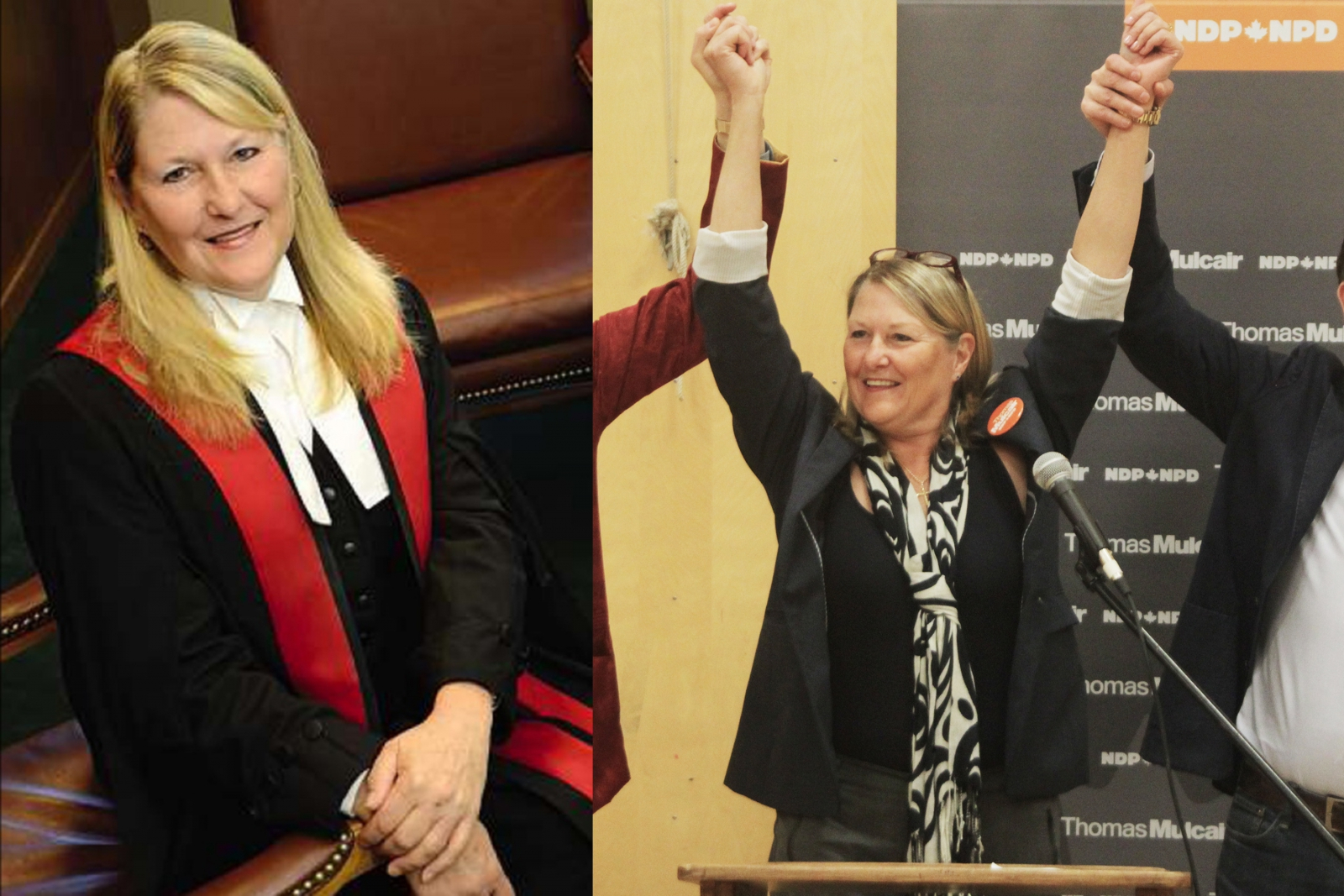 "I find I am not able to remain on the sidelines any more. Too much is at stake," says retired judge Carol Baird Ellan, who will run for the NDP in Burnaby North Seymour.

Dunk, dunk. The NDP have dropped the gavel, ruling that distinguished B.C. judge Carol Baird Ellan will represent the party in one of the hottest federal election races in Canada — Burnaby North Seymour, where the Kinder Morgan drilling clashes took place in November.

"I find I am not able to remain on the sidelines any more. Too much is at stake," she wrote in a statement. "Too many people are being left behind in favour of concessions for big business and lower taxes only for top earners."

The retired Chief Judge of the Provincial Court was nominated in a vote by NDP members on Sunday.  She noted that in her nearly 20-year career as a judge, she presided over preliminary hearings for murder cases, "mega trials," and family and criminal disputes.

Sitting in the court’s big chair has given her invaluable listening, decision-making, and consensus-building skills, she added.

“I made it my business to make sure that anyone who wanted to be heard had a chance to be heard,” she told the Vancouver Observer.

“But also, having heard everybody, to make those tough decisions.”

Baird Ellan says her many years looking down from the judge’s bench at many of society’s most vulnerable — addicts, the mentally ill, and victims of violence — has given her the conviction to offer herself for political office.

“So much more could have done for many of these people. We’re lacking services and support for families in crisis," she said.

Baird Ellan represents the last major party to confirm its candidate. The Conservatives are running municipal politician Mike Little; Liberals, tech entrepreneur Terry Beech; and the Greens, SFU biochemist Lynne Quarmby. The Vancouver Observer will have a full report on each candidate in coming days.

Analysts predict this to be a tight race, with some progressives worried the race will split votes on the left and centre, and allow the Conservatives to win.

None of this is lost on Baird Ellan, who has lived in North Vancouver for more than 30 years.

“If they don’t want Harper to get re-elected, the only logical, strategic way to vote would be to vote for the NDP because anything else would split the vote and make it possible for the Conservatives to win.”

“In my humble submission,” she added in a legalistic jest.

The riding is home to Kinder Morgan’s oil tank farm and Westridge Marine Terminal. Both would be expanded if the proposed $5.4 billion Trans Mountain pipeline goes ahead, to export oil sands bitumen via a five-fold increase in tankers through the Port of Vancouver.

Burnaby Mountain became ground zero in an unexpected battle against the project, raising concerns about oil sands expansion, the movements of a multinational corporation against a municipal mayor, and of course, climate change. More than 100 were arrested in the police-tape drama that drew hundreds of people daily for nearly two weeks.

“I am opposed to the expansion of Kinder Morgan," said Baird Ellan.

The National Energy Board will begin oral hearings in September for the pipeline, just a month ahead of the expected federal election on Oct.19. Many expect a wave of protests.

It’s been controversial because the Harper government passed an omnibus law that sped such NEB hearings, and restricts who can participate, and what can be discussed.

"They’re not permitting oral cross examination, it’s by a very truncated process. I believe the people who are participating [as intervenors] are finding it completely inadequate.”

When asked to imagine an NDP victory, and what she would do if given the chance to influence new laws on improving pipeline decisions, she said her background as a judge would help find and remove flaws from proposed bills.

Burnaby’s Mayor Derek Corrigan, whose office is still launching a legal challenge to give cities more say in pipeline decisions, is endorsing the three NDP candidates in the area.

"I can't think of a more impressive team than Kennedy Stewart, Peter Julian and Carol Baird Ellen. I sincerely hope that Burnaby residents will support all three of them in the upcoming federal election," Mayor Corrigan said Wednesday.

Baird Ellan has one grand-daughter, and five children with her husband of 33 years.

“I have the ability to speak to the working parent.  My youngest came when I was appointed.  They basically grew up with 'Mom the judge,” she said.

"Carol has demonstrated her clear commitment to social justice by dedicating her time to serving local families in need.”

“I am so proud to have her on the team and look forward to welcoming Carol into our caucus.”

The new Burnaby North Seymour riding takes in a conservative-leaning North Vancouver, and mixes it with a chunk of north Burnaby, which has seen tight battles between the NDP and the Conservatives for several elections.

NDP MP Kennedy Stewart narrowly won in 2011 with a margin of 1,011 votes. His Burnaby riding was split in a recent electoral map shakeup. He will run again.