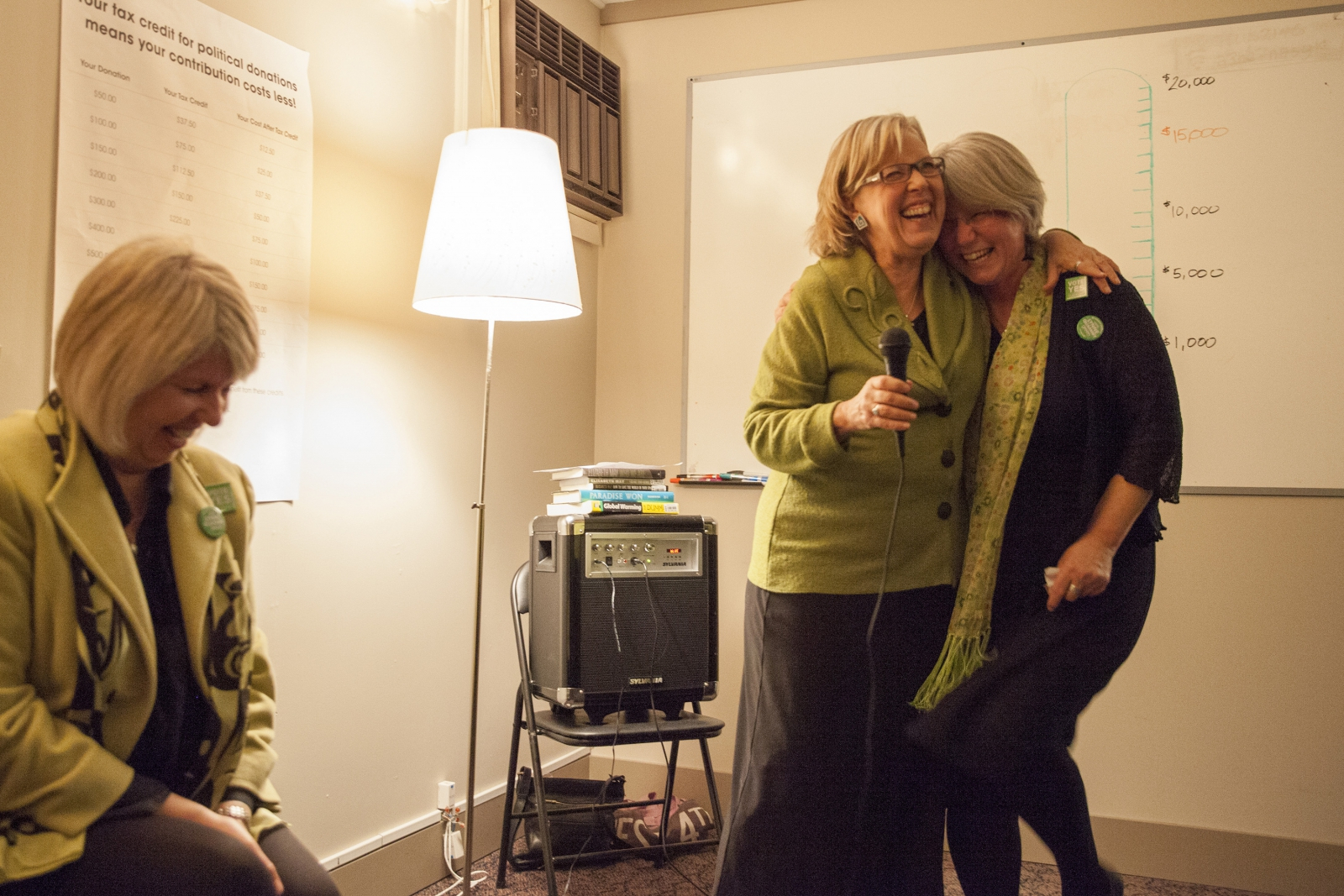 “At one point very soon, we’re going to ask you to empty your wallets. The doors have been barred,” said May, to chuckles from the room of 80 or so.

A man near the front then yelled, “I’ll give one thousand dollars!"

Later, laughing and glad-handing supporters, Elizabeth May, 60, demonstrated the energy of a youthful campaigner. She sees a modest breakthrough for the party in the 2015 federal election, and a new national poll suggests she might be right.

EKOS researchers found 21 per cent of British Columbians now support the Greens, with polling between February 25 to March 3. It’s a result up from the week before.

“In my view the Green Party has a very good chance of electing multiple MPs in B.C.,” said EKOS pollster Frank Graves in Ottawa on Sunday.

"If they can rise even a couple more points they could surprise a lot of people,” he added.

May believes even a few extra Green MPs in Parliament could give the party the balance of power if a coalition is formed with the Liberals and NDP. Conservatives currently have a narrow 11-seat majority.

A current seat-projection analysis at ThreeHundredEight.com sees the Liberals leading a minority Parliament, with support from other parties.

"And in a minority Parliament, Greens with a balance of power are willing to work across party lines to get climate action, to reform our electoral system, and [to be] a party of influence,” said May.

And in B.C., Greens have put their faith on political newcomer, Lynne Quarmby, who is seeking the Burnaby North-Seymour seat.

The accidental politician, as the SFU biochemist calls herself, was catapulted to public attention last fall.

Following her op/ed to the Vancouver Observer criticizing the Kinder Morgan pipeline over climate change concerns, she was hit by a lawsuit by the company for leading protests against the oil-sands-bitumen pipeline.

Her notoriety then skyrocketed after she crossed a police tape on Burnaby Mountain in defiance of the project, and got arrested. She still gets media calls from across the continent, even the Wall Street Journal.

But in the leafy suburb of Burnaby, she knows she’s facing an up-mountain political battle.

So how does Quarmby think she can over these rivals?

“Instead of subsidizing tar sands development, we can start investing in clean tech and green tech, which is vibrant in Canada.”

“We’ve got tonnes of potential. We can build a new world that doesn’t depend on this [petroleum] stuff,” added Quarmby.

Graves says Greens need to overturn the sense that voting for the party is a symbolic vote. But if the race continues to narrow, this could be a very different election for the party, he said.

In the new riding composition, Conservatives had 44 percent of the votes in 2011, shows PunditsGuide.ca, making that party her prime target, says Quarmby.

Ever the scientist, she calculated she needs door knockers to commit to 10,000 hours between now and Oct.19 in order to win, she said.

"Because the other parties are full of spin doctors, strategy and money. And what they don’t have is the people willing to go door to door,” said May.

“When I won in Saanich Gulf Islands, the pundits said it wasn’t possible."

“The secret ingredient in the Green Party sauce is giving voters something to believe in. When you do, the people turn out who have been turned off or maybe never voted,” May added.

In Green lore, a lone Green M.P. in Australia tipped the balance of power two elections ago.

And in Canada, May sees hoped for wins in Thunder Bay, Guelph, Montreal, Quebec City and the Maritimes.

It’s a long shot, but every election has its X factors.

In 2011, the collapse of the Bloc led to an orange crush, handing the NDP Official Opposition status for the first time. Many credit the charisma of the cane-holding Jack Layton, as part of that alchemy.

But following his death, Elizabeth May attended to a packed campus auditorium at the University of Winnipeg, as she often does across the country.

And on this occasion, a young man got up to tell the crowd and May a heartfelt remark: “You’re the next Jack Layton.”

Greens are also the only party proposing a moratorium on oil sands expansion.

Nationally, the EKOS poll found voter support like so:

The poll was commissioned by iPolitics, and reached 3,241 people, and is considered accurate +/- 1.7%.

In the coming days, we will have a riding profile on all candidates in this must-watch riding race.