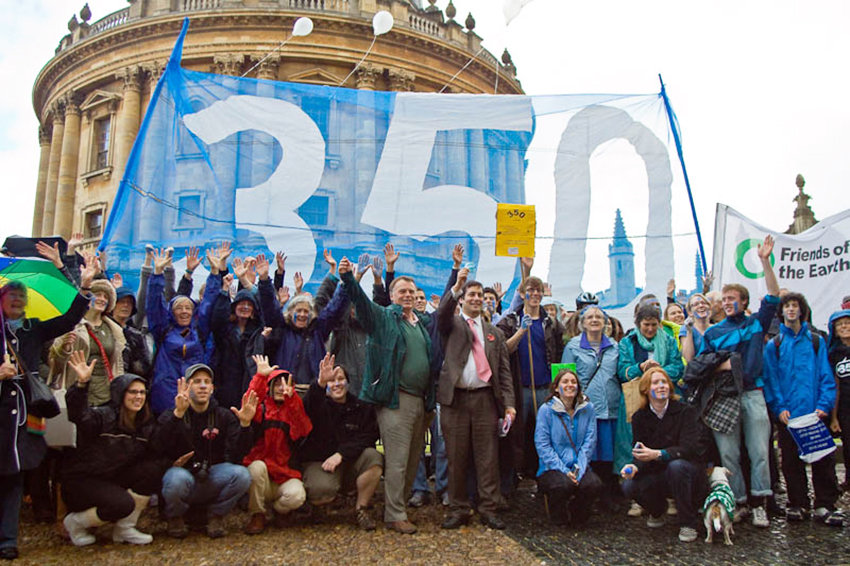 U.K. alumni and scholars at one of the most influential universities in the world – the University of Oxford — are threatening to hand in their degrees, in reaction to a long-awaited decision Monday by the university to delay its decision to divest fossil fuels from its $3-billon endowment.

“I studied climate change at Oxford, and I care about climate change,” she said by cellphone, when reached by the National Observer.

“Oxford has some of the best scientists working on the impacts of climate change. It has one of the leading research facilities on stranded assets, looking at the financial risks of carbon investments.”

“I think it’s totally wrong that the university would remain invested in fossil fuels. It’s totally rubbish,” she added.

Paffard, along with influential Guardian enviro-columnist George Monbiot, solar-tech entrepreneur Jeremy Leggett, and a total of 20 Oxford alumni have now committed to handing in their degrees in protest.

An online Oxford Alumni petition to the university’s chancellor now has close to 600 signatures.

Oxford alumni: please join me in pledging to hand back your degrees if University doesn't divest from #fossil fuels. http://t.co/SFzxHiZpDs

550 Oxford alumni are also pledging to withhold donations to Oxford until it divests, said a campaign news release.

Pafarrd may also rip up and burn her degree – moves that are hardly dramatic compared to the tropical cyclones destroying island nations these days, she said.

“I don’t think [burning my degree] is as dramatic as investing millions of pounds in the most destructive industry on earth,” she said.

Pafarrd has a Bachelor’s degree in biological sciences from Oxford, and now doubles as the U.K. divestment co-ordinator for 350.org. The activist group calls the divestment campaign the fastest growing social movement in history.

Oxford, which is the oldest university in the English speaking world, convened a council to study the issue of divestment. Following a student vote in the fall, it was under pressure to finally recommend Monday on whether the university should sell off its oil, gas and coal stocks from its $3-billion endowment fund.

But instead, it delayed its decision until May, according to news reports. The public affairs office was not reachable for comment late Monday, but said in a statement:

“Last October’s Oxford university student union resolution has raised an important and multi-faceted matter which requires thorough consideration. The university council had a good discussion of the issues and agreed to consider the matter further at a future meeting,” said the University Council, according to The Guardian.

An Oxford "Socially Responsible Investment Review Committee" had been listening to both sides of the debate.

It recently reported that it heard from opponents to divestment that such a move would imperil Oxford's ability to gain adequate returns from its investments. Divestment might also hurt the university's ability to gain funding directly from fossil fuel companies, the committee heard.

Oxford's former director of finance was among attending the "sit-in" in protest, and expressed disappointment at the council's Monday statement to delay its divestment decision.

"As Oxford is a global leader in the academic world, many people were watching to see what happened today, and the University has responded with a message that will only encourage those who seek to derail the process of moving from fossil fuels," wrote John Clements, in an e-mail Monday.

"They could have exercised some moral leadership and encouraged other institutions to follow suit," he added.

Some 100 Oxford faculty have signed a letter supporting divestment, and a campaign counts 3,000 students as backers.

The move to put the question of divestment to a blue-ribbon panel is a familiar one in Canada. The University of Toronto’s President convened such a group, following alumni, student and faculty pressure.

Likewise, at the University of British Columbia — which has the largest campus holding of fossil fuel stocks in Canada — professors voted 62 per cent in favour of divestment in February. Following the vote, the Board of Directors is now obliged to respond to the campus pressure to divest.

More than 30 Canadian universities now have active campus divest campaigns, including a new one at the University of Calgary in the heart of Alberta’s oil industry.

In the United States, Harvard University students stormed their Ivy League school in February, demanding the President meet with them to listen to their concerns.

At the time, Harvard Law students were also suing the university, claiming the school was failing in its charitable duty to not do harm to the planet with its investments in fossil fuels.

A scientific study published in January in the journal Nature found that "a third of oil reserves, half of gas reserves and over 80 per cent of current coal reserves should remain unused from 2010 to 2050 in order to meet the target of 2° Celsius." It also urged no oil and gas drilling in the Arctic.

On Saturday, tropical cyclone Pam slammed into the South Pacific island of Vanuatu, killing 24, in one of the worse natural disasters in the region in memory, said aid officials.

Around 200 institutions globally, with a combined asset size of over $50 billion, have committed to divest, including the Rockefeller Brothers Foundation, the British Medical Association, Stanford University and the World Council of Churches, according to the Oxford University Fossil Free Divestment Campaign.