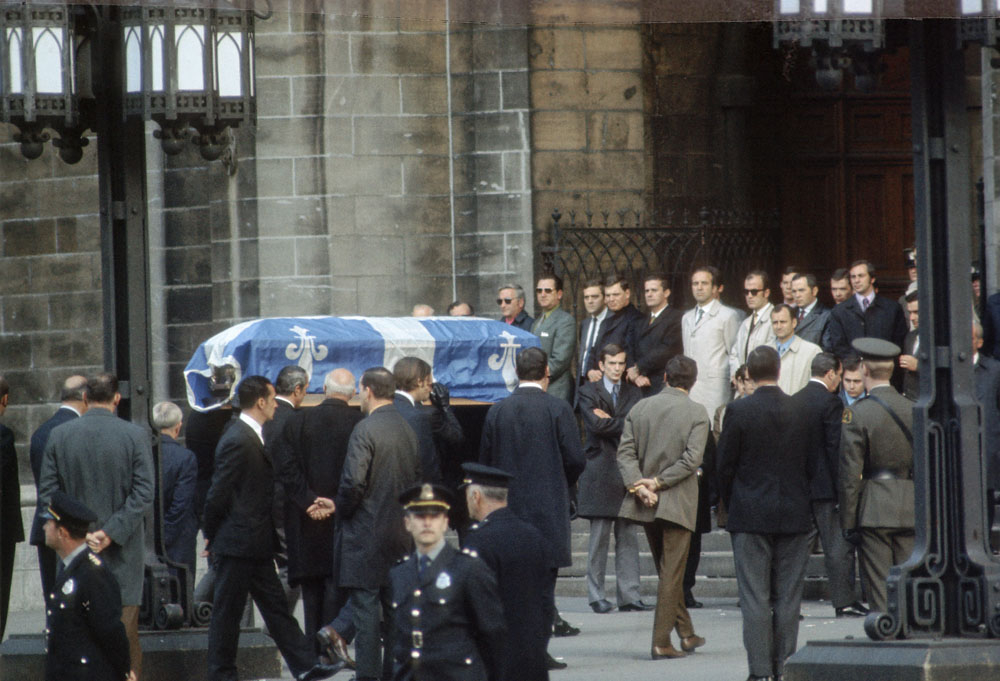 Bill C-51 is stirring up a firestorm of criticism because, as many experts have pointed out, it massively expands the powers of the Canadian Security Intelligence Service (CSIS) but does not include real oversight by an independent and responsible public body.

But how Stephen Harper is changing CSIS reveals far more, as he breaks the established rules of Canadian democracy in his headlong rush to enact what he calls the Anti-Terrorism Act—which others have recognized to be the Anti-Privacy Act.

CSIS began over thirty years ago, when the country’s security was far more obviously at risk than it is today.

Back in the late 1960s and the 1970’s, during the height of the Cold War and the FLQ crisis, it was a time of multiple bombings and real foreign spies and actual political kidnappings and even murder.

This time of “secrets, betrayals and violence” has been called “the most tumultuous period in Canada’s recent history.”

Yet despite these genuine and critical threats to Canadians—which took place directly on Canadian soil— the McDonald Commission, whose reports led to the creation of CSIS, firmly and repeatedly resisted pressures to infringe on Canadians’ civil rights.

Take this excerpt from page 407 of the Commission's report:

Effectiveness must not be the only standard for judging security arrangements. ...it is essential that our security system also meet the requirements of democracy. This means that because Canada is a democratic country it must tolerate security risks which a non-democratic state would not.

Or this one, several pages later:

The secrecy of intelligence operations, their lack of exposure to judicial examination and comment, the danger to civil liberties of excessive surveillance, and the record of past wrong-doings, all point to the need for an effective review of security operations by persons independent of the government of the day.

Stephen Harper, by contrast, is only too eager to deal away Canadians’ civil rights, and for a largely manufactured and illusory threat of terrorist activity. Many believe his real goal, underlying the public relations narrative, is to further stifle dissent against the fossil fuel industry.

The McDonald Commission wasn’t afraid to be upfront and inclusive in its process and its actions. It openly “advertised in most of the daily newspapers and a number of the ethnic newspapers across Canada, inviting the public to submit to us any allegations they wished to make” about the conduct of the existing Canadian security services, then part of the RCMP.

By contrast, today Canada’s Conservative government has prepared Bill C-51 in secret, consulting only with its chosen (and unnamed) “experts” behind closed doors, while ignoring other independent experts and anyone who questions their judgement.

The McDonald Commission took four years to come to its conclusions, despite the drastic circumstances of the day.

Stephen Harper wants Bill C-51 hearings to end in less than a month.

The McDonald Commission stood on guard for Canadians civil rights

The three-person “Commission of Inquiry Concerning Certain Activities of the Royal Canadian Mounted Police,” known as the McDonald Commission, was headed by Justice David McDonald. It was set up in 1977 by an order from the Cabinet of then prime minister Pierre Elliott Trudeau.

Its task was not to look into the mayhem and murder caused by Soviet spies and violent Marxist Québec separatists, despite their widespread occurrence and disruptive effects, but into a string of illegal acts committed by the RCMP and other police services in their efforts to control these activities.

The Commission sought input from all of Canada. It received 294 allegations from groups and individuals, and a further 124 written submissions about policies and procedures. The commissioners held 169 public hearings and 144 hearings behind closed doors. They questioned 149 witnesses and accepted over 800 exhibits.

Stephen Harper, by contrast, announced Bill C-51 before any formal or open discussion had taken place. And he told Canadians about it not in the House of Commons, where new bills are usually introduced, but at a Conservative Party rally in Richmond, Ontario.

Even the pre-release press “lock-down,” where reporters are supposed to be given a chance to look at the bill before it was released to the public, was, as one commenter put it, “Orwellian” in its double-speak and lack of real content.

The Conservative government has refused to hear from four former prime ministers – including one from his own Party – who asked to comment on the bill. Senior Conservative Party representatives have outright rejected input from a whole range of legal, political, human rights and privacy experts and officials.

Minister of Justice Peter MacKay, and Public Safety Minister Steve Blaney have made it clear that they will not consider any amendments to Bill C-51.

Stephen Harper is ramming Bill C-51 through the institutions of Canadian government, and for political reasons— not security reasons.

Sheldon Clare, president of the Canadian Firearms Association (closely allied with the US National Rifle Association), despite being a vigorous advocate for Canadians owning guns for personal security, agrees that Stephen Harper is playing politics with terrorism.

Asked about Bill C-51 recently on CBC Radio’s As It Happens, he responded that “the threat of terrorism is really quite low.”

Clare went on to pinpoint what he sees as the real reason for this Draconian new legislation: “…in times where people want to advocate more state control… they often find things to put forward to scare people….the politics of fear are not are not a particularly good basis [for] legislation.”

As testimony unrolled before the McDonald Commission, from 1977 to 1981, extensive evidence of police malfeasance came forward.

In March, 1976, Corporal Robert Samson tried to bomb the home of Ben Steinberg, the head of the Steinberg supermarket chain in Montreal.

In October, 1972, in what was called “Opération Bricole” (Operation Handyman), police officers from several jurisdictions stole documents from the Agence de Presse Libre du Québec, a left-wing news service, and later destroyed them.

Hundreds of searches without warrants, unauthorized opening of mail, use of forged documents, and access to confidential documents in personal government files came to light.

The Commission eventually released three reports, between 1979 and 1981, totalling 1,861 pages.

The McDonald Commission eventually reached the firm conclusion that the role of policing the nation needed to be separated from the role of intelligence-gathering for national security purposes. CSIS was the result, formally created on June 21,1984 by an act of Parliament.

The Commissioners felt that the process of gathering information to keep Canadians safe had political implications, and needed civilian and non-partisan political oversight. This role was felt to be very different from the role of policing, which involves investigating and apprehending criminals and bringing them to justice in the court system. The Commission felt the two roles were so different that they needed to be handled very differently, by two different bodies.

Most legal, civil rights, privacy and constitutional experts since then have agreed with the McDonald Commission’s findings.

The three Commission Reports contain messages that are profoundly relevant, as this country wrestles with Stephen Harper’s Bill C-51.

Here’s what Francis Fox, Canada’s Solicitor General, said to the House of Commons just before the McDonald Commission was created:

In a democratic society….it is essential that those on whom… falls the task of enforcing the law and protecting our basic liberties, can count upon the complete support of the people. This support, in return, must be based on the faith that those protecting these rights do themselves feel bound and indeed are bound by our laws in fulfilling their duties.

How supportive will Canadians be of secret, unaccountable and possibly illegal policing activities – the kind that a beefed-up CSIS will be able to carry out after Bill C-51 is passed?

Certainly, irrational anxiety stirred up by “Islamist jihadists” rhetoric from the Prime Minister can have a temporary impact, but what will happen if the primary impact is that disaffected and misguided youth, aroused by the unbalanced and racist overtones of that rhetoric, leave the country— as they have other countries— to join the ISIS community in north-western Iraq, ruining their lives and leaving their families bereft?

How supportive will Canadians be when ordinary citizens who advocate for climate change, which inevitably means opposing expansion of the fossil fuel industry, are threatened and intimidated, or arrested and have their lives disrupted – as has already begun to happen to pipeline protesters in Burnaby, even with the current enforcement environment?

What could be more poignant, and more challenging in today’s climate of mutual suspicion, than the following observation from the Commission’s First Report:

…the heart and soul of the concern expressed in our mandate is the importance of ensuring that, in the future, conditions will exist that will justify public trust in the [police services].

Here is one final comment from the three Canadian citizens who spent four years of their lives examining the relationship between democracy and security in this country. They agonized over the balance in this relationship, and then made the following resonant observation about it:

Canada must meet both the requirements of security and the requirements of democracy: we must never forget that the fundamental purpose of the former is to secure the latter. Those who seek to subvert Canada's democratic institutions would realize an ironic victory if Canadians were to permit their governors to violate the requisites of democracy in the course of protecting them from its opponents.

Stephen Harper has decided, on behalf of you and me, that democracy is less important than deepening and widening police powers, established (according to the public relations messaging) to defend the country against the threat of terrorist harm, but more probably in order to tighten his grip on the anyone opposed to his government’s policies and actions.

This doesn’t sit at all well with a rapidly growing number of thoughtful, honourable and peaceable Canadian citizens.