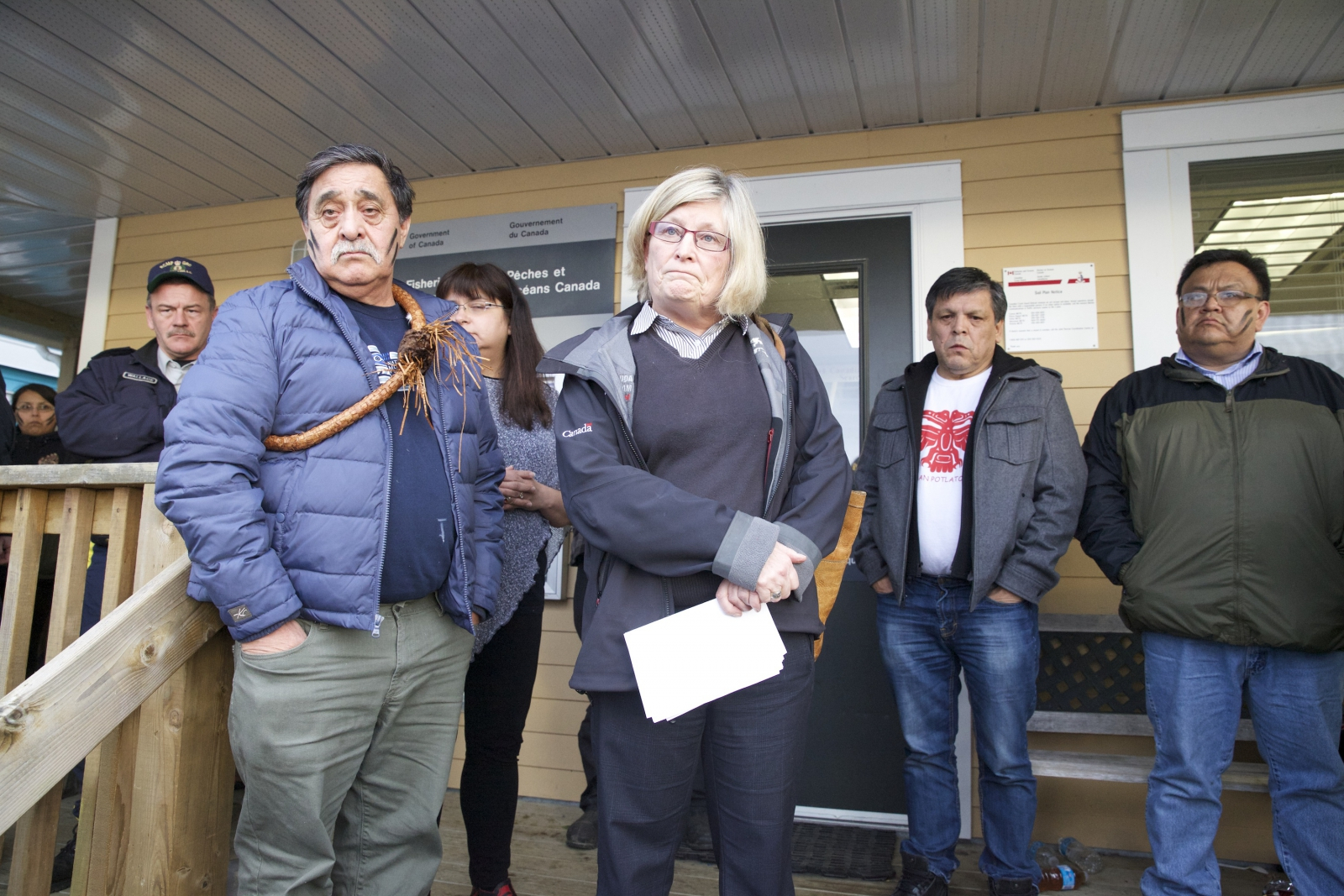 “We need everybody on the fishing grounds…We’re not letting up,” said Heiltsuk Integrated Resource Management Department, Kelly Brown.

Following three hours of high stakes negotiations in a federal fisheries office with locked-in Heiltsuk leaders on Denny Island, a DFO regional director emerged to an emotional First Nations crowd Monday night, saying she needed to check with her bosses in Eastern Canada first about opening or closing the controversial herring fishery.

“We’re still talking. We had some useful things that we decided on today,” said DFO’s senior B.C. manager, Sue Farlinger to the 50 Heiltsuk community members gathered.

"But I still need until tomorrow morning, I was waking people on the other side of the country who had gone to bed,” she added last night.

As the DFO manager walked away for the evening, Heiltsuk leaders shed tears, and were given hugs of support by community members.

Conservative fishery minister Gail Shea, from P.E.I., is expected to be keenly involved in the final decision Tuesday on the fate of the commercial herring fishery. Talks resumed at 10 a.m.

Last year, and again this year, the Harper government announced it would reopen the herring fishery against very strong opposition from Heiltsuk Nation, and oddly, against the views of some DFO scientists.

“For the three [herring fishing] areas showing signs of recovery, it is recommended that they remain closed in 2014,” DFO scientists warned.

The e-mail became public during a recent and unsuccessful legal attempt by five coastal B.C. First Nations in federal court to close the fishery.

"The forecasting methodology that DFO uses now for central coast herring is actually quite flawed…DFO’s forecasts are likely twice as much as they should be,” said Tanasichuk, Commonsense Canadian reported.

DFO said its science was updated in 2015, and claim a limited catch is sustainable. Critics suggest DFO was under pressure from industry and the Harper cabinet to re-open the catch. The department's science staff was cut by the federal government in 2012.

The two locked-in Heiltsuk leaders are hopeful the fishing in the disputed area seven will be closed, but they are preparing for the worst.

Before retiring for the evening, the director of the Heiltsuk Integrated Resource Management Department addressed the crowd outside:

“We need everybody on the fishing grounds tomorrow…We’re not letting up,” said Kelly Brown.

Last week, when the first wave of the commercial fishing was opened —with the large seine boats —Heiltsuk boats intersected with them, and issued condemnations at the fishermen on board.

Hundreds of tonnes of herring were netted in just of a few hours.

A second re-opening is expected for the smaller gill net boats, which catch a similar volume of fish.

Indigenous fishermen say the herring eggs, called roe, that get deposited on the shorelines normally in the millions at this time of year are in terrible shape.

The oily fish—that ordinarily provides a springtime feeding frenzy for grizzlies, whales and wolves —has not been commercially fished in these waters for several years due to over fishing concerns.

A gillnet opening is expected to take place on Tuesday just outside Kitasu Bay in the area of Kitasoo/Xaixais Nation.