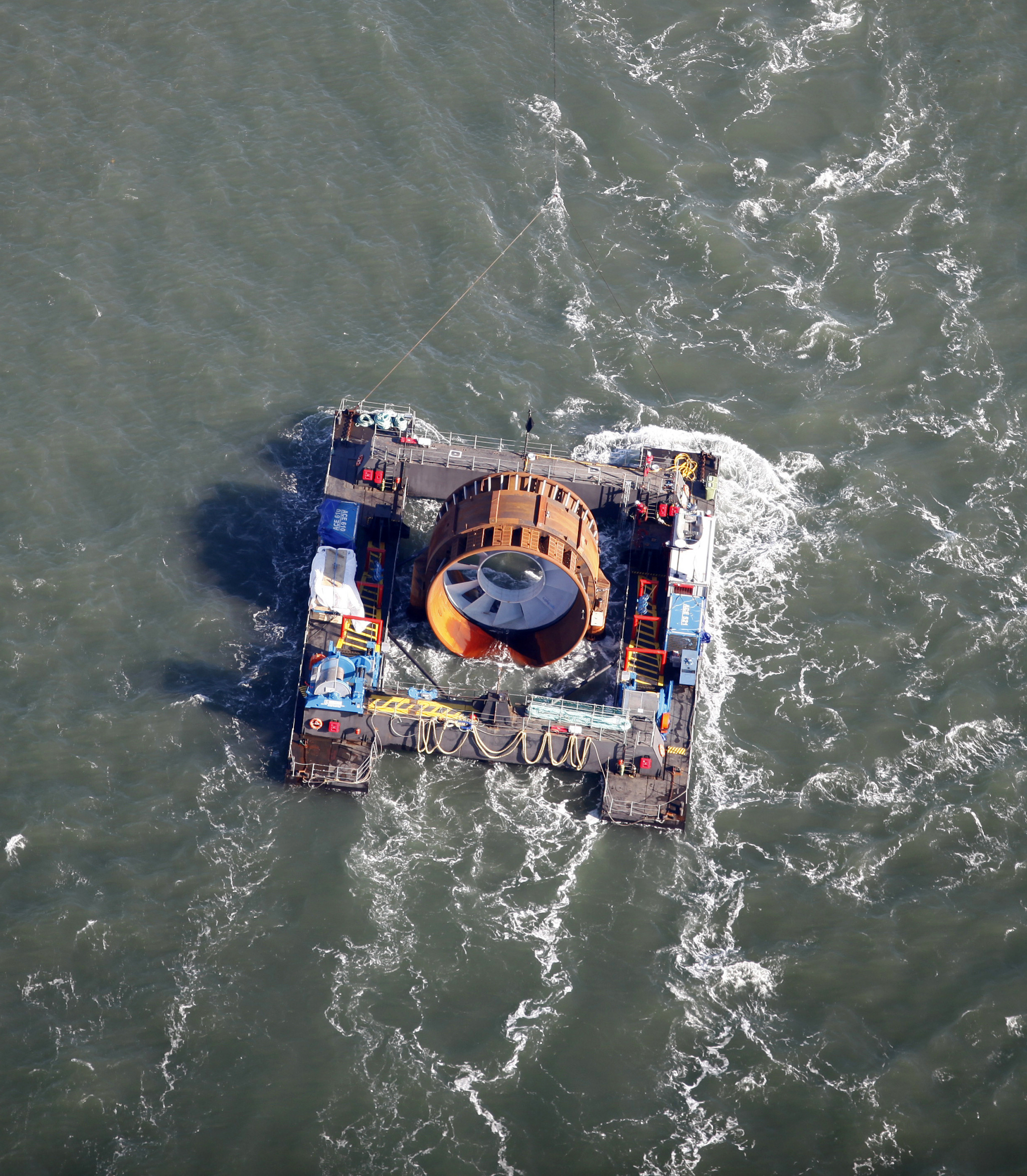 Some of the world’s most powerful tides surge off the northwest coast of Nova Scotia in the Bay of Fundy. It is here that a number of companies are looking to harness the power of that water and convert it into energy using turbines that are like underwater windmills.

The swift tidal currents in the bay can reach a peak surface speed of 10 knots or 18.5 kilometres an hour. The vertical tide can be over 16 metres, one of the highest tides globally.

But that very tidal pull that makes the Bay of Fundy so attractive to tidal energy companies also presents significant challenges: in a previous test of an underwater energy turbine the rushing waters actually tore the blades off of the machine.

Even so, industry is still betting it can overcome the forces of nature and generate enough energy from the water to initially power some 7,500 homes within five years. Recently, the federal government gave the Irish-owned OpenHydro Technology Canada $6.3 million to deploy two tidal stream turbines in the Bay of Fundy.

“All the ingredients are here to really give this all a go. It’s turning from a concept into a reality, so it’s an exciting time,” says Matthew Lumley, communications director with FORCE, the leading test centre in Canada for in-stream, tidal energy.

OpenHydro is one of four tidal energy companies to have a berth at FORCE in the Bay of Fundy. At the FORCE facility the company will use its two turbines to demonstrate the cost and performance of a commercial tidal farm.

To help withstand the harsh marine environment, each turbine will be mounted on a subsea gravity base placed on the sea bed. Each unit is expected to produce two megawatts at a cost of 14.7 cents per kilowatt by 2020, enough to supply energy to 1,000 Nova Scotian homes.

The turbines use the flow of tides to turn blades in much the same manner as a windmill. With each rotation of the turbine, the energy is converted into electricity.

Lumley likens the Bay of Fundy to an oil strike. He notes when testing first began in 2009 very little was known about the site. A turbine was placed in the waters designed for what the developer believed would be 150 per cent stronger than the estimated flow.

It turned out the flow was closer to 250 per cent stronger than what they anticipated. The good news was the turbine lasted longer than it should have, but the mighty tides ultimately blew the blades out.

Similarly, the first seed money for FORCE came from research suggesting the Minas Passage (which is connected to the bay) contained about 300 megawatts of power. Today, they know the power is actually closer to between 6,000 to 8,000 megawatts and estimate that 2,500 megawatts could potentially be extracted, more than what Nova Scotia uses during its peak energy hours.

“That’s how much it’s changed: 20 times more available power than the original research estimated,” Lumley observes. “It’s like drilling for oil and breaking your drill bit to discover the reservoir was three times what you thought it would be.”

But as the blade snapping story illustrates, developing tidal power is not without its challenges. Leading energy analyst Angus McCrone, chief editor at Bloomberg New Energy Finance in London, England, expressed caution over the energy source’s prospects in 2014.

In a news release he noted that “taking devices from small-scale demonstrator stage to the pre-commercial array stage is proving even more expensive and time-consuming than many companies – and their investors – expected.”

In a phone interview with the National Observer, McCrone said while it has been possible for offshore wind companies to make enormous machines, the same does not hold true with tidal. “The strains on very large blades from fast-moving water would be enormous, so there has to be a different way of doing it.”

McCrone pointed out that Marine Current Turbines has had an operating turbine off of Northern Ireland for three or four years that has generated consistent power, so the technology can be made to work. However, he says no one has tried to install more than one turbine at a time before.

“And then there’s the overriding challenge of how do we get the costs down from, we reckon, more than $400 a megawatt hour to something competitive, which would be sort of around $100 a megawatt hour?”

The turbines also come with a lot of infrastructure. FORCE, for example, has four different submarine power cables totalling about 10 kilometres on the seabed. Each one of those cables can carry 16 megawatts. They run up on shore and about a kilometre underground to a series of underground cable ducts before ending up at a sub-station that FORCE built.

From there, 10 kilometres of overhead transmission line connects FORCE to the existing substation in Parrsboro, Nova Scotia. The cost of the onshore and offshore infrastructure amounted to about $30-million.

Nor is it easy to build that kind of infrastructure in such an unforgiving place. The first sub-sea cable ever in the Minas Passage was put down in a December blizzard, Lumley says.

“We’re working in one of the most powerful sites on earth,” he notes.

Despite the challenges, the effort is worth it, comments Sue Molloy, an adjunct professor in the Department of Mechanical Engineering at Dalhousie University in Halifax.

“I think we need a chance to give it a try. I think it is viable,” says Molloy, who teaches courses on tidal power, turbomachines and sustainable engineering.

Molloy argues that for the industry to thrive it has to be part of a coordinated effort and something that’s highly supported by government. “We’re creating a fundamental change.”

And if tidal power can be made to work anywhere, the Bay of Fundy is one of the places, according to McCrone. He says a fast-moving tidal stream will provide much cheaper power than a place with a slower moving tidal stream and therefore will be the places that get developed first if the resource is there.

One key development taking place is Atlantis Resource’s plan to put four turbines in the water by March 2016 off the coast of Scotland. If it goes without a hitch, McCrone says it will represent a big step forward for the sector.

“But,” adds McCrone, “if there’s a mistake made with putting one of the turbines out to sea or big delays, then that is a serious setback for hopes of the tidal stream sector developing world-wide.”