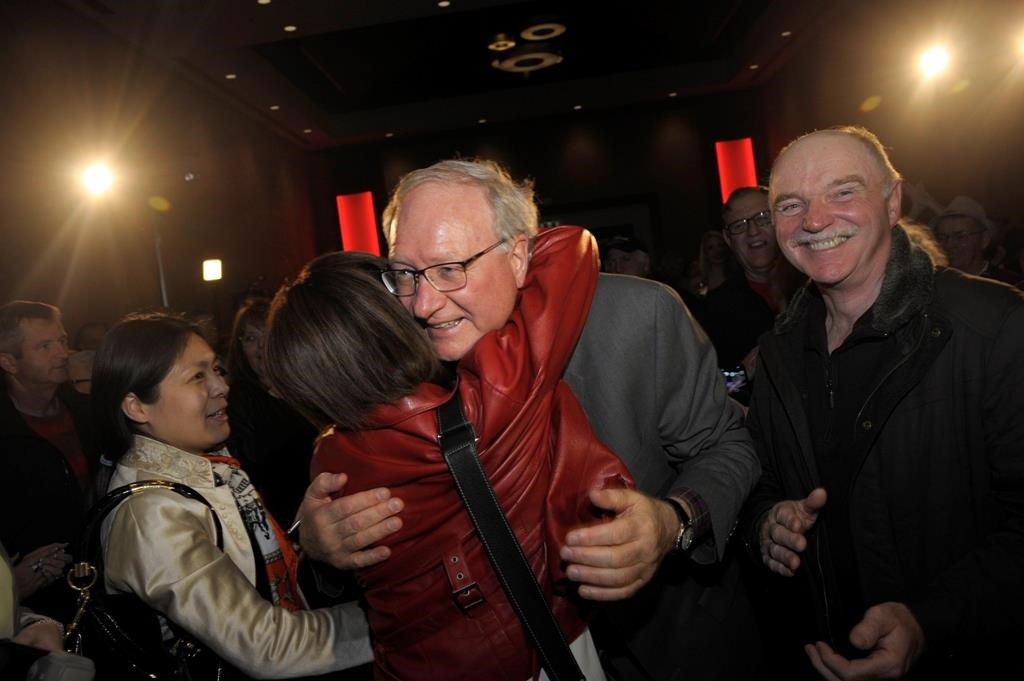 CHARLOTTETOWN — Rookie politician Wade MacLauchlan has led his Liberal party to a majority victory in Prince Edward Island, where voters decided Monday to grant a third consecutive term to a government repeatedly accused during the campaign of undermining public trust.

The Liberals saw their majority slightly reduced from the 20 seats they held before the election, taking 18 seats to eight for the Tories and one for the Greens, marking an historic first for the third party.

MacLauchlan spoke to party supporters in Stanhope, where he watched the election results produce a number of tight riding races.

"As you know we're gathered here in a room where I started Grade 1 quite a few years ago , and we're back starting something else in 2015," said MacLauchlan, 60, a former president of the University of Prince Edward Island.

"It has been a very interesting evening in the province, one that I expect has taken us further into the evening than people may have intended. I think that indicates it will be a very interesting era that's ahead of us in terms of Prince Edward Island politics and we very much look forward to being part of that. "

The Conservatives, led by former Charlottetown city councillor Rob Lantz, gained five seats. But Lantz failed to win the riding of Charlottetown-Brighton in a close race, leaving questions about his political future.

Four ridings were decided by fewer than 100 votes, including one Liberal victory by a margin of just two votes.

The election might best be remembered for the strong showing by the Greens and New Democrats as they received more than 20 per cent of the popular vote in a province where they have struggled for support.

Peter Bevan-Baker, leader of the Island's Green party, earned an electoral breakthrough by winning his district of Kellys Cross-Cumberland in central P.E.I.

It was the first provincial campaign as leader for the NDP's Mike Redmond, who failed to win his district.

"Peter Bevan-Baker is someone for whom I have a lot of respect," he told reporters at a campaign party in Charlottetown. "He is someone I believe will make a significant contribution to the province."

The opposition parties used the campaign to raise questions about the Liberal government's accountability on an immigrant investor program and an aborted bid to become the country's Internet gambling regulator.

But the Liberals presented a fresh face to the electorate as MacLauchlan became party leader and premier in late February after Robert Ghiz stunned the province by stepping down after almost eight years in power.

When the 27-seat legislature was dissolved for the election four weeks ago, the Liberals held 20 seats, the Tories had three seats, there was one Independent and three seats were vacant.

Even before the campaign began, MacLauchlan moved quickly to deal with the challenges facing his government.

He started by introducing a series of conflict-of-interest reforms aimed at improving government transparency and accountability.

The moves came after a three-year RCMP investigation into allegations of fraud surrounding the immigrant investor program, which police closed in January with no charges laid.

MacLauchlan has also asked the province's auditor general to examine an Internet gaming plan that was scrapped in February 2012, but remains at the centre of questions about the conduct of current and former elected officials and staff.

Despite those issues, the former academic — who is also the province's first openly gay premier — was the perceived front-runner in the race from the beginning.

His bid to remake the image of the Liberal party was helped by the infusion of many new faces among the Liberal candidates. There are eight ridings where the winners from the 2011 election did not seek re-election, seven that were won by the Liberals.

The Tories started the campaign by focusing on government accountability. There were a few attack ads at first, but the party seemed to back off when MacLauchlan suggested it wasn't the Island way of doing politics.

Still, Lantz came back to the accountability theme at the end of the campaign, telling a rally of supporters: "People are tired of the scandals, tired of the mismanagement and tired of being told one thing when they know the Liberals talk the talk but never walk the walk."

Lantz pledged that a Conservative government would launch a royal commission to take a deeper look at government accountability.

Tories struggle to keep power as Albertans head to polls