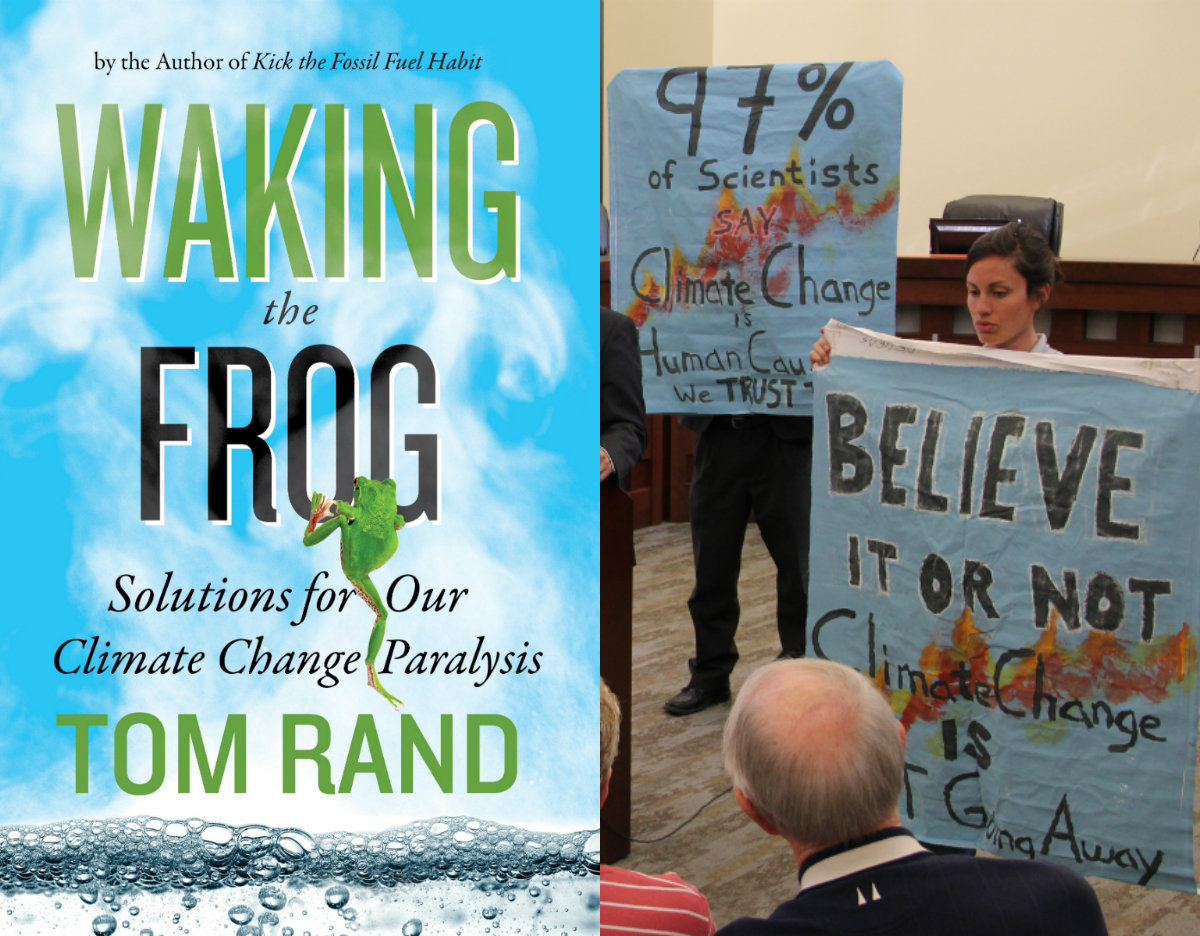 Alarms about climate change are increasing in intensity. Yet greenhouse gas emissions grow unabated. Are we the proverbial frog in a pot of warming water? Tom Rand – author of Waking the Frog: Solutions for our Climate Change Paralysis - looks to systemic causes of our continued paralysis in the face of a storm of increasing intensity. By better understanding the causes of our paralysis, we might yet leap into action. Part 1 of a 4 part series: Psychology, Markets, Economics and Finance.

Climate change is hard to think about. The very real risk that humankind has inadvertently committed itself to a development path that ends in ruin runs counter to our most cherished self-image – that of inevitable progress. Even for those who believe the risk is real – who trust the overwhelming consensus of our scientific elite – it’s difficult to act on that belief. The siren song of denial runs deeper than the “it’s a scam” typical of FOX News or Ezra Levant.

What I call ‘passive denial’ is our shared ability to acknowledge the science but ignore the consequences. From Margaret Wente’s selfish ‘why bother?’ to Rex Murphy’s shrill ‘leave the oil guys alone!’ to the collective shrug that greets ever-more-stark warnings of floods, fires, and droughts: in the face of a real and present threat to the very fabric of our economy and civic society, we blithely continue with business as usual. We act as if climate disruption were not the existential risk it is.

Climate denial is a siren song that, to some extent, seduces us all. Why? Broadly speaking because it’s incompatible with many of our shared cultural norms: the future is better than the past, human ingenuity knows no bounds, nature is ours to control, human destiny means progress. Our brains will play all kinds of tricks to keep those norms intact. That means keeping awareness of climate disruption at bay.

From the moment we’re born our brains form physical connections between impressions, thoughts and ideas. Emotions play a primary role. Tiger links to roar, zoo and scary. Mummy links to lovely, safe and family. This process continues throughout our lives. Economy links to growing, nature with resource and humans with clever. And so on. A vast network of automatic associations, operating at lighting speed beneath our conscious radar, embodies our worldview.

Personal background and shared culture become common sense, which operates automatically, unconsciously, implicitly. It dominates conscious thought, pre-conditioning our reaction to new information. It’s how we make sense of the world, and why we’re so unlike computers.

What is that worldview? Nature has been ours to master ever since Sir Francis Bacon declared opposable thumbs and a big brain made it so. Religion largely agreed; “let’s make man in our image … let them rule… over all the Earth”. In a market-driven, post-Renaissance North America the future is necessarily better than the past, and business pages snort with derision at the notion of economic limits. And centuries of war and economic turbulence lend credence to the conservative preference for a steady hand at the tiller.

These beliefs have served us well. Life is grand at the dawn of the 21st century. That’s why they have such a hold on our minds. But common sense can be wrong in an ever-changing world. None of these beliefs accommodate or anticipate climate disruption. The threat of climate disruption is incompatible with much of that worldview.

The future is set to knock us down a peg or two. Economic limits loom in the form of ecological collapse, resource wars and an onslaught of violent weather for which our infrastructure is woefully unprepared. Nature is once again in charge. Our hubris may seem well suited to captains of industry surveying a 21st century of unprecedented wealth, but it takes us down a blind alley. The hard paradox for small-c conservatives is that a steady hand will destroy the status quo, taking us over the climate cliff to the rocks below.

To preserve that worldview, our brains start with a bait and switch. Instead of dealing with the fact of climate disruption, we actually answer the question ‘how does it make me feel?’ Because it’s frightening, we’re primed to disbelief. Our default position – all of us, myself included – is to discount the threat. And then well-understood cognitive biases stand guard, ready to defend against such a disruptive belief.

Confirmation bias dictates we seek evidence to confirm our disbelief, and ignore evidence to the contrary. Affect bias, our predisposition to discount arguments whose outcomes we don’t like, means anyone trying to convince us otherwise faces an uphill battle. Peer group bias – we value the opinions of our peers over experts – means those around us who’ve come to the same conclusion reinforce our disbelief. And so on. It takes a huge amount of work to overcome passive denial.

Actions that rely on exposing the horrible facts of climate disruption are doomed. ‘If only people were told the truth’, the idea goes, ‘we’d leap into an appropriately energetic response!’ That’s naïve. We are not rational. More arguments, data and graphs will do nothing. We’re not Dr. Spock, we’re Captain Kirk – emotional, often irrational, with a strong point of view.

What we need is a new siren song. One that works with our predispositions and cognitive biases. One that charms away our climate denial. Simply put, we need to change the conversation.

Imagine now a bright future of clean energy abundance, underwritten by an economic stimulus package that rebuilds our infrastructure, re-invigorates our entrepreneurial culture and engages the creative potential of the 21st century powerhouse of a market. That’s the sort of story that builds on our worldview and plays to our cognitive biases. In this story we are innovative, future-building, resilient. It also happens to be true. My work, and that of my colleagues in the emerging cleantech economy, is to ensure this new siren song seduces our business and cultural elites. If it doesn’t, those ever-louder alarm bells from our scientific elite will continue to fall on deaf ears.