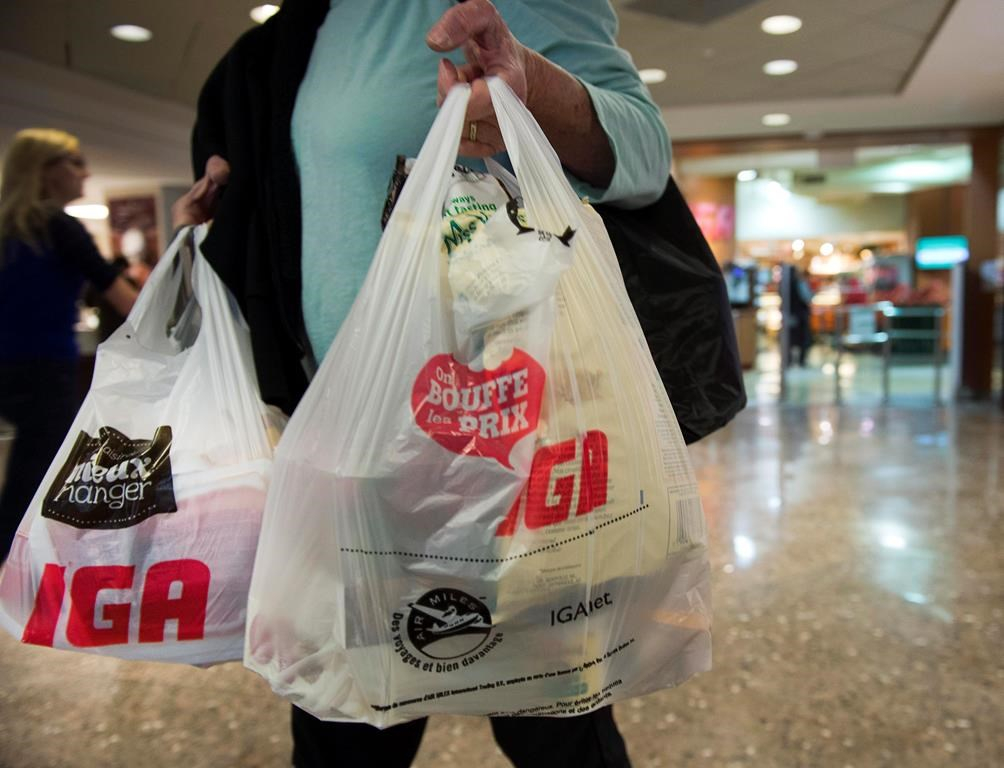 Montreal is mulling a ban on plastic bags and the city would become the first major Canadian metropolis to adopt such a measure if it proceeds.

Proposed bans have been controversial in some jurisdictions, with an attempt in Toronto a few years ago ultimately failing.

Montreal Mayor Denis Coderre is in favour but wants a better understanding of the situation to emerge from public consultations that have just begun.

"We have to think global but act local and this is one of those issues where we have to take a look at the impact on our planet," Coderre said in an interview.

The use of plastic bags has fallen dramatically in Quebec due to public awareness campaigns as well as a five-cent charge brought in by retailers.

Quebecers now use roughly a billion bags a year, less than half from a decade ago. It's a statistic Coderre acknowledges will loom large in the city's final decision.

"I'm firm (in my position) about that debate but I'm willing to listen," Coderre said. "Should we totally ban them or look at an in-between solution?"

Pierre Dubois, a sustainable development consultant with the Canadian Plastics Industry Association, says the consultation will allow his group to voice its opposition to the idea.

"We think a ban is probably the worst way to solve environmental problems," he said.

Dubois said a bag ban would create other problems. If consumers forget their reusable cloth bags, paper bags and their larger carbon footprint would be the likely option at stores. Consumers who use shopping bags to dispose of waste would in turn have to purchase more bags.

"Exchanging one type of material for another is not necessarily a panacea," said Dubois, who supports education on recycling and reusing.

He said statistics suggest about 59 per cent of Quebecers reuse shopping bags at least once or twice and that more than one-third recycle them. About seven per cent are guilty of putting them in the trash.

"I agree with you when I see a bag flying along the road, I cringe," Dubois said. "That person could have put it in their blue box and it could have been used by someone to make something else."

Montreal's examination is taking place as bans have come under the microscope in the United States.

Last October, California became the first U.S. state to adopt a ban on single-use bags after a long battle that in part triggered the Montreal decision. But that statewide ban was put on hold in February after a trade group rustled up enough signatures to shelve it until a referendum in 2016.

Still, hundreds of cities in California have plastic bag bylaws forbidding their use including Los Angeles and San Francisco. Large U.S. cities like Chicago, Seattle and Austin also have bans.

In Canada, Toronto tried and failed in 2012, while a handful of smaller municipalities have been successful.

In 2007, Leaf Rapids, Man., became the first Candian municipality to prohibit single-use plastic shopping bags. In Quebec, Huntingdon and Deux-Montagnes have forbidden them.

Retail advocates also question how tourists in Montreal would navigate such restrictions.

"We're concerned because we're don't think we're using the right mechanism to deal with the issue," said Nathalie St-Pierre, vice-president of the Retail Council of Canada.

St-Pierre notes that plastic bags used in stores are recyclable and the city should focus on organic waste disposal instead of a ban. She says the city cited landfill issues, but she argues plastic bags are a small part of what ends up at the dump.

Coderre said the city is also drafting a new garbage policy. He says when Montreal comes up with its plastic-bag plan, neighbouring towns and suburbs will follow their lead.

"There are a lot of people who are sensitive about the issue so I think it's good policy to look into it," he noted.

The consultation will continue in June with recommendations expected later this year.