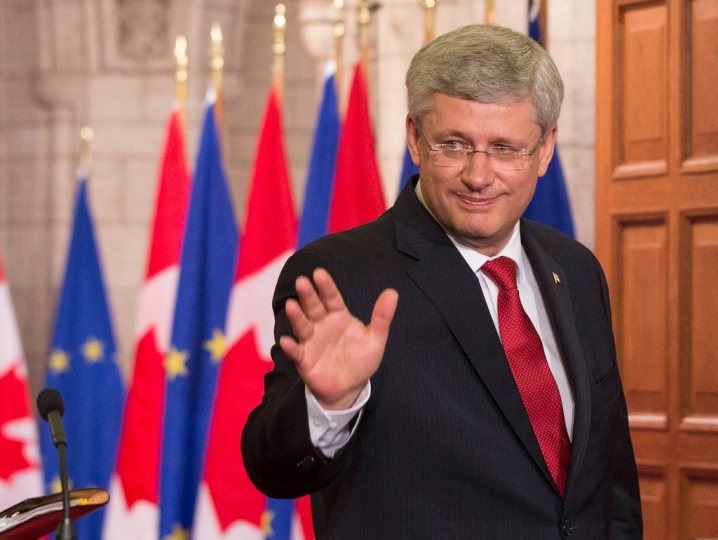 OTTAWA — "Prime Minister Harper has the worst record of any prime minister on economic growth since R. B. Bennett in the depths of the Great Depression." — Liberal Leader Justin Trudeau, Friday, May 15, 2015.

Though Justin Trudeau said it as recently as last week, the Liberals have been claiming since at least 2013 that Canada's economic growth under the Harper-led Conservative government has been the worst since the 1930s.

Among those who use it often is Liberal MP — and former federal finance minister — Ralph Goodale.

In an April speech, Goodale added some detail, noting that "since the Harper government came to power, Canada has had an average annual economic growth rate of only about 1.75 per cent — that's the worst growth record of any prime minister since R. B. Bennett in the 1930s."

How accurate is the Liberal claim?

Spoiler Alert: The Canadian Press Baloney Meter is a dispassionate examination of political statements culminating in a ranking of accuracy on a scale of "no baloney'' to "full of baloney'' (complete methodology below).

This one earns a rating of "a little baloney." Here's why.

A nation's economic growth is usually measured by way of gross domestic product, the total value of all the goods produced and services provided in a country during a single year.

What goes into that basket of goods and services has changed over time, but generally, statisticians compare the year-over-year totals for GDP to arrive at a determination of where the economy is going.

John Turner, Joe Clark and Kim Campbell were excluded because they served as prime minister for less than a year.

For years in which there was a change of government, GDP for that year was added to the tally for both governments.

Here are the results:

Simple math indicates that yes, under the Conservative government led by Stephen Harper, Canada's economic growth rate has been the worst since the Great Depression. But economists warn against using that math to make a political judgment.

"The basic implication here is: is it his fault?" said Peter Dungan, an economist at the University of Toronto.

"Clearly, they wouldn't say something like this, presumably, without the implication it is his fault ... and that's where the issue comes in."

A nation's growth rate is dependent on economic productivity and the size of its labour force.

When most Canadians worked in farming and then manufacturing, technology helped increase productivity, and growth rates were also driven by post-war population booms.

But now there's an aging population in an economy dominated by the service sector — not just in Canada but many Western economies, driving down the pace of global growth.

As one economist put it: robots may help the auto sector become more productive, but nobody wants one cutting their hair.

"It's a bit unfair of Trudeau to say (Harper's) been a lousy prime minister because he's been supervising this period of time when we've had lower productivity growth," said William Scarth, an economist at McMaster University in Hamilton.

"Independent of recessions, (Harper) is a P.M. when the service sector is becoming king and anybody else — including Trudeau, if he was in charge — would have to cope with the same fact of life."

There was also that recession.

Pierre Trudeau and Mulroney both governed during economic downturns and saw similar dips in growth. But their economic batting averages are stronger because they either benefited from strong growth as they were taking office or strong recoveries after the slump.

While economists are generally in agreement that the 2008 economic collapse wasn't his fault, there is room for debate on whether he should have acted sooner to speed growth in the aftermath.

A prime minister may not control all the moving parts of an economy, but political leadership is what greases the machinery, said Talan Iscan, an economist at Dalhousie University in Halifax.

"Prime ministers do set the tone for how specific investments are going to be made and who is going to get what part of the slice here and there," he said.

"Then they have to take responsibility for it."

Just going by mathematical calculations, it's accurate for the Liberals to assert that Canada's economic growth rate under Harper is the worst since the 1930s.

But as the experts note, the inference that Harper is to blame is up for debate.

For that reason, the statement — "Prime Minister Harper has the worst record of any prime minister on economic growth since R. B. Bennett in the depths of the Great Depression " — deserves a rating of "a little baloney."

No baloney - the statement is completely accurate

Full of baloney - the statement is completely inaccurate