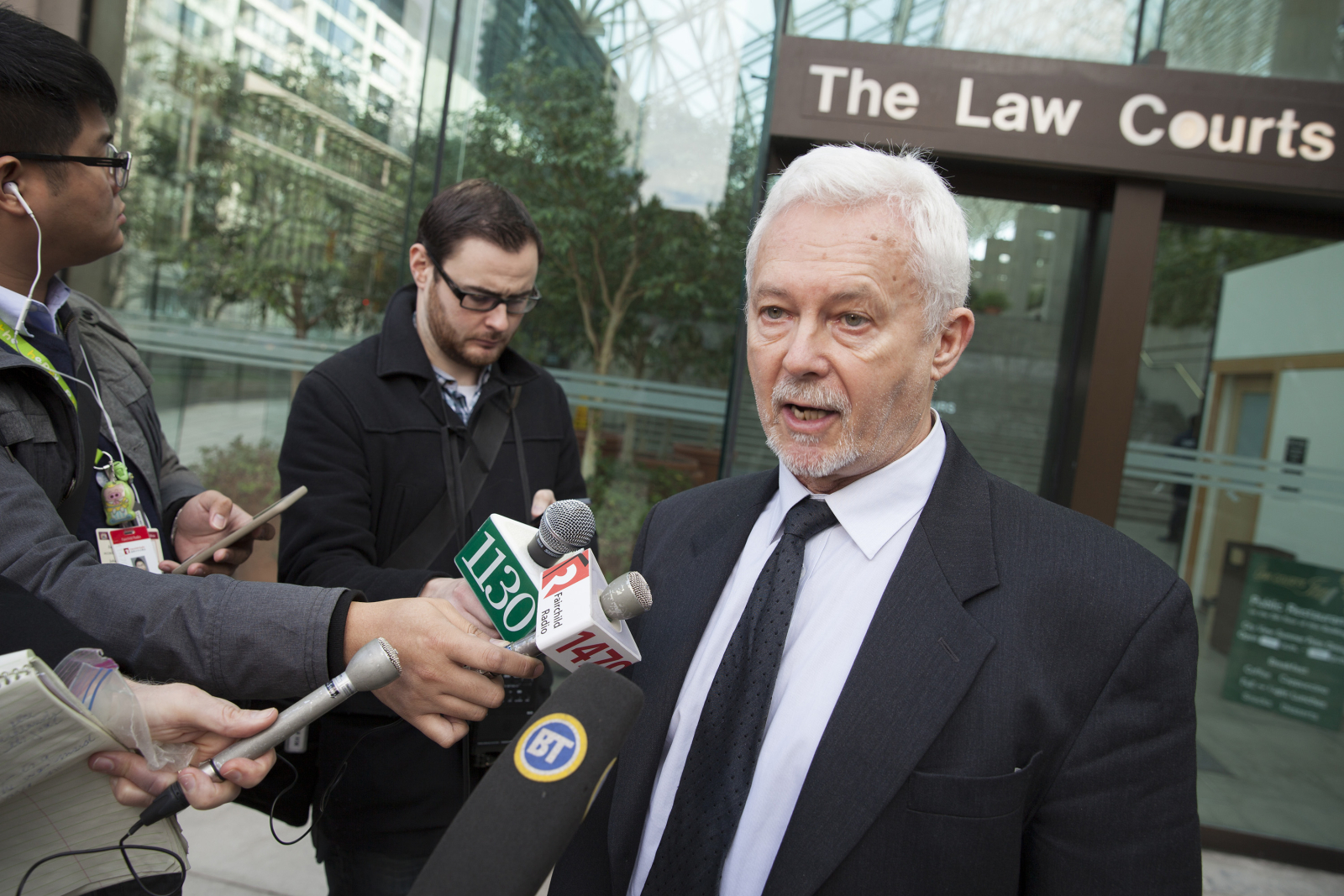 A Burnaby, B.C. pipeline critic and retiree who was hit with a multi-million-dollar lawsuit by Kinder Morgan last fall is renewing his battle —this time in the B.C. legislature, with the provincial NDP introducing a so-called 'anti-SLAPP lawsuit' bill on Tuesday in Victoria.

“I think the NDP took up my cause once again, because they realize, that [corporate] law suits [against protesters] are a fundamental infringement on our democratic rights," Dutton told the National Observer.

"They represent a clear and present danger to all the rights we take for granted,” he added.

The bill, if passed, would give B.C. judges greater powers to evaluate and punish corporations seeking to use the courts to maliciously advance merit-less legal attacks to silence or bankrupt their opponents.

Alan Dutton was one of the five original defendants who was hit in October 2014 with what was feared to be a multi-million dollar legal claim by the Texas-based oil pipeline giant. Each opposed the company's $5.4-billion Trans Mountain expansion pipeline, between Edmonton and Burnaby. Some defendants, such as SFU biochemist Lynne Quarmby, feared they'd lose their homes over the episode.

Following a public uproar over the lawsuits, Kinder Morgan's Canadian President Ian Anderson backed off from seeking financial penalties from the defendants, saying he supported freedom of speech —but not interruptions to his company's controversial pipeline-drill tests on Burnaby Mountain. Eventually, more than 100 people were arrested in the protester clashes when the drilling began.

Around that time, Kinder Morgan's lawyer named Dutton as a key instigator in rousing public opposition and for mobilizing resisters to thwart that drilling. Dutton denied that was his role.

The former SFU academic and non-profit worker said his activities were entirely lawful, which included running the website for BROKE – a citizens group of 500 members that opposes the Trans Mountain pipeline expansion pipeline between Edmonton and Burnaby.

Dutton said the Kinder Morgan’s legal effort was a classic “SLAPP” suit (strategic lawsuit against public participation) to silence its critics who were seeking to deny the company social licence.

Eventually, Kinder Morgan quietly discontinued most the law suits against the five defendants.

But Dutton refused. He filed a further court action in January to have the law suit not just “discontinued” (which meant it could be resumed at a later time), but completely thrown out in a summary judgment, arguing it was an attack on freedom of speech.

He lost, and was at risk of having to pay Kinder Morgan’s legal bill. But the company filed a discontinuance successfully anyway.

And again, Dutton didn’t stop there.

He pushed to create the "Environmental Defense Working Group” - an informal gathering of experts, including his lawyer Neil Chantler and others from West Coast Environmental Law, to work with the NDP to craft a new anti-SLAPP piece of legislation.

BC Liberals killed anti-SLAPP law before

It’s a not an entirely new idea. When the NDP were previously in power in B.C., the party had put such a law in place. The law was later overturned by the incoming Liberal government, says MLA Leonard Krog, the NDP's justice critic to Attorney General Suzanne Anton.

“The Liberals did it as a favour for their powerful corporate friends,” he said "If you have deep pockets, you can frighten off protest and silence dissent."

"This [new bill] is a defence against 'big money' —so people who want to exercise their democratic right to peaceful protest can do so.”

Krog introduced the private members' bill Tuesday, but expects it will be not get to a second reading, and will therefore die. He hopes it won't. "Sometimes justice does prevail," he said.

Whatever happens, Dutton will continue fighting the pipeline expansion, that would multiply oil tankers in the Port of Vancouver six fold, to 400 per year if it advances. He said he also intends to launch a defamation lawsuit against Kinder Morgan.

"I will not stop. I will take fight Kinder Morgan, and I will fight them at every opportunity to stop Kinder Morgan's pipeline from going through," said Dutton.

"We have a duty to fight back,” he added.

Kinder Morgan was asked to comment late Tuesday. We will update this story when a response is received.

The American billionaire CEO of Kinder Morgan told a Houston industry crowd recently that he was "astounded" by the level of opposition to the project in British Columbia.

The National Energy Board will conduct its final public hearings into the controversial pipeline project in September or October said the board. It expects to present its final report in January 2016.

If the cabinet of the next federal government (determined in an expected fall vote) approves the pipeline, the company says construction could begin in 2016.

Burnaby's Mayor Derek Corrigan recently vowed to get himself arrested, along with thousands of others, to stop the pipeline.

Dutton has launched a new website — StopSLAPPsuits.ca — to publicize his anti-SLAPP efforts.