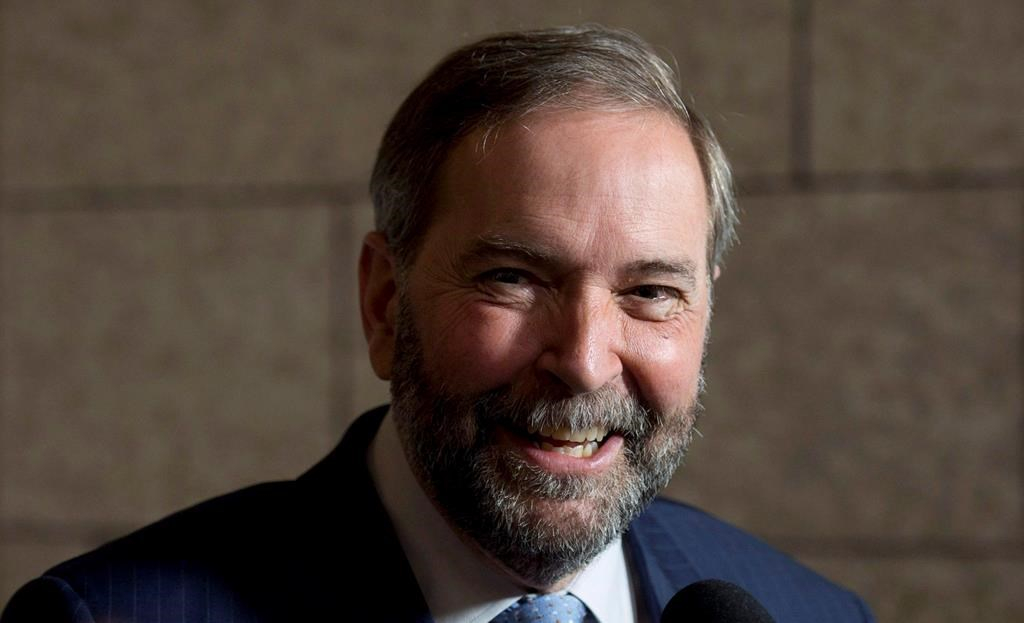 For newshounds watching the CBC's national newscast on May 13, 1987, anchor Knowlton Nash's declaration raised the prospect of a seismic shift in federal politics.

Word that New Democrats were leading with 37 per cent of popular support had created a "holiday atmosphere" at the NDP national caucus meeting in Ottawa that morning, Nash told his viewers.

Yet the footage from the day appears sedate compared with the carnival chaos inside the NDP's federal caucus room earlier this month following Rachel Notley's stunning provincial win in Alberta.

Notley's unlikely NDP majority in Canada's conservative heartland is credited with again boosting the Tom Mulcair-led federal NDP to the top of the leaderboard in national public opinion surveys.

"For those in denial about the rise of the NDP, we would suggest that they consider abandoning that skepticism," pollster Frank Graves of Ekos Research trumpeted in a recent release.

The proportion of Canadians who would consider voting NDP is at a 12-month high and currently in a statistical tie with the Liberals, Nik Nanos of Nanos Research said in an interview.

"The key takeaway from the Alberta election is that it's created goodwill for the party."

The Ed Broadbent-led party of 1987 was at 37 per cent among decided voters, marginally ahead of the Liberals at 36 and Progressive Conservatives at 25 — a lead that was to rise to 41 per cent by July that year.

Of course, surveys in May can't predict an election outcome in October, pollsters warn.

"This is the one risk for the New Democrats," said Nanos. "It's a bit early to do a victory lap.

"If this polling situation had occurred on Labour Day weekend before the (Oct. 19) election, it would be a game-changer."

Momentum is one thing but profile is another, said Jamey Heath, a former NDP research director who is no longer employed by the party. Getting a share of the polling lead will make people take a second look at New Democrats.

If shibboleths about it being too radical, anti-business and bad for economic growth were overcome, it was still viewed as a protest party that couldn't win, said Heath.

"What we're seeing now in public opinion polls is that they really undermine the latter part of that argument — that the NDP can't win — and, in the course of that, cause people to look at what the NDP really stands for."

Be it francophone voters in Quebec or dyed-in-the-wool Alberta Tories, he added, "the more instances there are of sort of 'unusual suspects' seeing themselves as comfortable with the NDP, then that has a ripple effect."

It is uncommon for provincial political events to have much impact on federal party fortunes, said former Liberal party pollster Michael Marzolini of Pollara Strategic Insights, and when they do it is more often a negative in his experience.

Mulcair, like Notley in Alberta, must still win the contest as the preferred agent of change for those wishing to oust an entrenched incumbent.

"Why would he be seen to be more likely to do that because Rachel Notley won a government in Alberta?" asked Marzolini.

The real question, however, concerns public engagement in political surveys when the voting public isn't yet tuned in.

Nanos describes Canadian voters as being in a "quasi-hibernation" that's only occasionally broken. The stunning Alberta election result was enough to disturb that slumber.

"They're wondering what everyone else is wondering: What does this mean for the federal election?" said Nanos. "No one knows yet."

A national election call boosts the usual 25 per cent of people who pay at least some attention to politics to upwards of 60 per cent, said Marzolini. That's why none of the three major party leaders — including Prime Minister Stephen Harper — ought to be losing sleep over the polls just yet.

"There's going to be a massive reset button being pushed at some point when the election is called," he said.

"Everybody's going to start paying attention and kicking the tires."