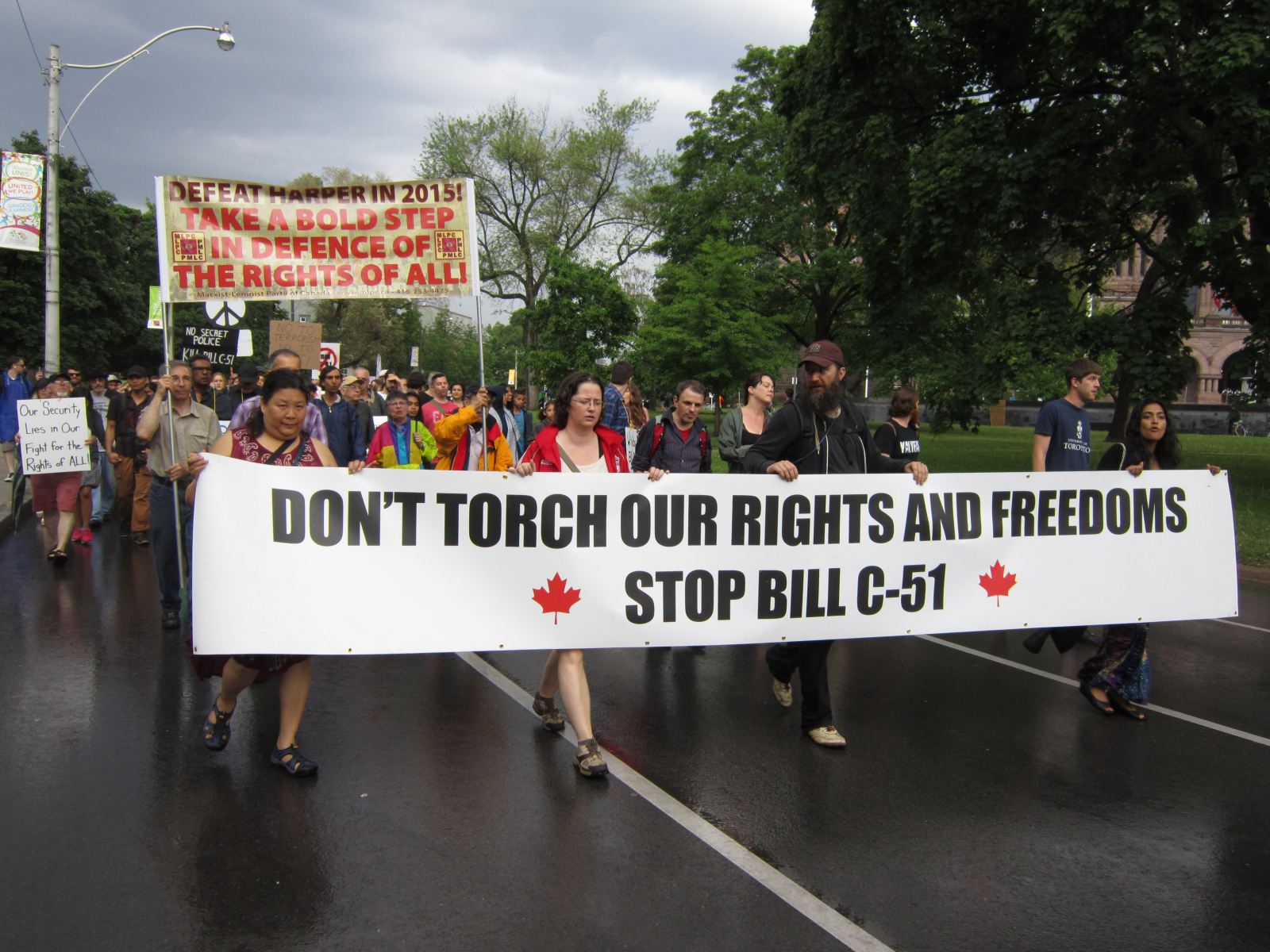 More than 500 braved Toronto’s monsoonal rain on May 30 to protest proposed legislation that many are decrying as a descent into fascism.

“What this legislation creates — and make no mistake about it — is a modern day Gestapo, no exaggeration. It chills, censors, and criminalizes free speech, free association, and constitutional rights of assembly. This legislation is not new. German and Italian versions were passed in the 1930s in Europe and they looked very much like C-51,” said lawyer and constitutional expert Rocco Galati at the pre-march rally.

Galati successfully challenged Harper's appointment of a Supreme Court judge in 2013, and was described as a one-person "Unofficial Opposition" in a profile in The Globe and Mail.

He was joined by anti-tar sands activist Heather Milton-Lightening of the Pasqua First Nation, Josephine Grey, founder of Low Income Families Together, and Andrew Cash, the New Democratic Party (NDP) MP for Davenport.

The Toronto Coalition to Stop Bill C-51 demonstrated yesterday as part of a National Day of Action, assembling outside the Ontario Legislature for a rally and speeches before marching south down University Avenue to the Federal Courts on Queen Street.

They were aligned with the National Convergence march in Ottawa, all aimed at stopping Bill C-51, proposed government legislation that many Canadians feel will increase government surveillance and threaten civil rights.

“It takes all your private information and shares it with all government agencies, including foreign governments. For some Canadian citizens that becomes an eventuality of torture and/or death when they travel abroad,” said Galati, who also accused the federal government of wiretapping his phones since 1999.

Galati’s concerns over these proposed changes were echoed by Mark Taliano at GlobalResearch.ca. He cited U.S. author Naomi Wolf, who he said labelled Bill C-51 as a "fascist shift" in Canadian politics akin to the American Patriot Act passed weeks after 9/11.

Taliano said the bill uses the threat of Islamic State terrorism to implement a range of restrictive measures, such as muzzling the press, infiltrating citizens’ groups, and spying on the public, among others. These potential measures raised the ire of many protestors in Toronto.

“I want to be able to express my political freedoms and not be afraid of being detained,” said Toronto resident Chloe Alexander.

Aidan Myshrall, who travelled from Cambridge to join the demonstration, said that the Harper government “conjured up this bill” as part of the war on terror, which he described as a “war on everyone.”

In his view, the war on terror is a business that allows the government to strip Canadians of their rights and freedoms at home, while seizing “control of natural resources as assets for their corporate sponsors.”

Brittany Smith, a spokesperson for the Toronto activists, said that Bill C-51 is a regressive piece of legislation.

“Democracy dies when you have your government obsessed with power and control, spying on citizens, stripping away their rights, and giving broad powers to security and intelligence services to turn them into a secret police force," Smith said. "This is what Bill C-51 is doing, and it’s part of a long string of security initiatives that take away our rights and it will stifle free speech. The law will be applied to progressive movements that our government already considers a threat."

Movements that could be targeted further under C-51 legislation include Indigenous land rights groups, environmental and climate change activists, and organizations supporting Palestinian rights, according to Smith.

Already, the Canada Revenue Agency has audited charities who were mostly opposed to the Harper government’s energy policies, such as the Ecology Action Centre and Tides Canada Foundation in 2012-13, followed by the David Suzuki Foundation in the following fiscal year, among others.

Smith said that the nationwide protests on May 30 aimed to both make Bill C-51 a major election issue and to put pressure on the Senate, on whose fate the legislation currently depends, to either vote it down or at least delay a final decision so it would “die on paper,” as the Oct. 19 federal election looms. If the bill is passed, activists plan on petitioning the next government to reverse it.

“We’re not going to tell anyone who to vote for, but we will try and persuade people to vote for a candidate from a party who did not vote for this bill,” said Smith.

So far, the Green Party, together with the New Democrat Party and Bloc Quebecois, have voted against C-51 in the House of Commons. While Justin Trudeau’s federal Liberals have voted in favour of the bill at the House level, Senate opposition leader James Cowan has said that most Liberal Senators will vote against the legislation in the upper chamber.

Fifteen senators now oppose the bill, five are in favour, and another 62 are either undecided or undeclared, according to information on stopc51.ca. A final Senate vote is expected this week.

“If the Senate truly wants to be the house of sober second thought then they’ll kill this bill and that’s what we’re calling on them to do,” said Smith.

Ralph Lauren Schoenen Kopen In Nederland
Now that you possess the knowledge that you need to stay healthy and beautiful by way of all stages in your life, you may loosen up and enjoy every single second. Ageing well is just not challenging when you are aware how. Apply what you've figured out on this page and a lengthier, far healthier life is available for you personally.Accomplishing Beauty salon Good quality Your hair At Home - Methods That Work Well!

Keep relax. Tinnitus might not be linked to a significant health problem, so calm down in order that you do not add more stress to the troubles. Worrying will undoubtedly make you emphasis much more about the ringing in ears, which will appear to really make it worse. Stay calm and relax so that it is less difficult to come up with other activities.