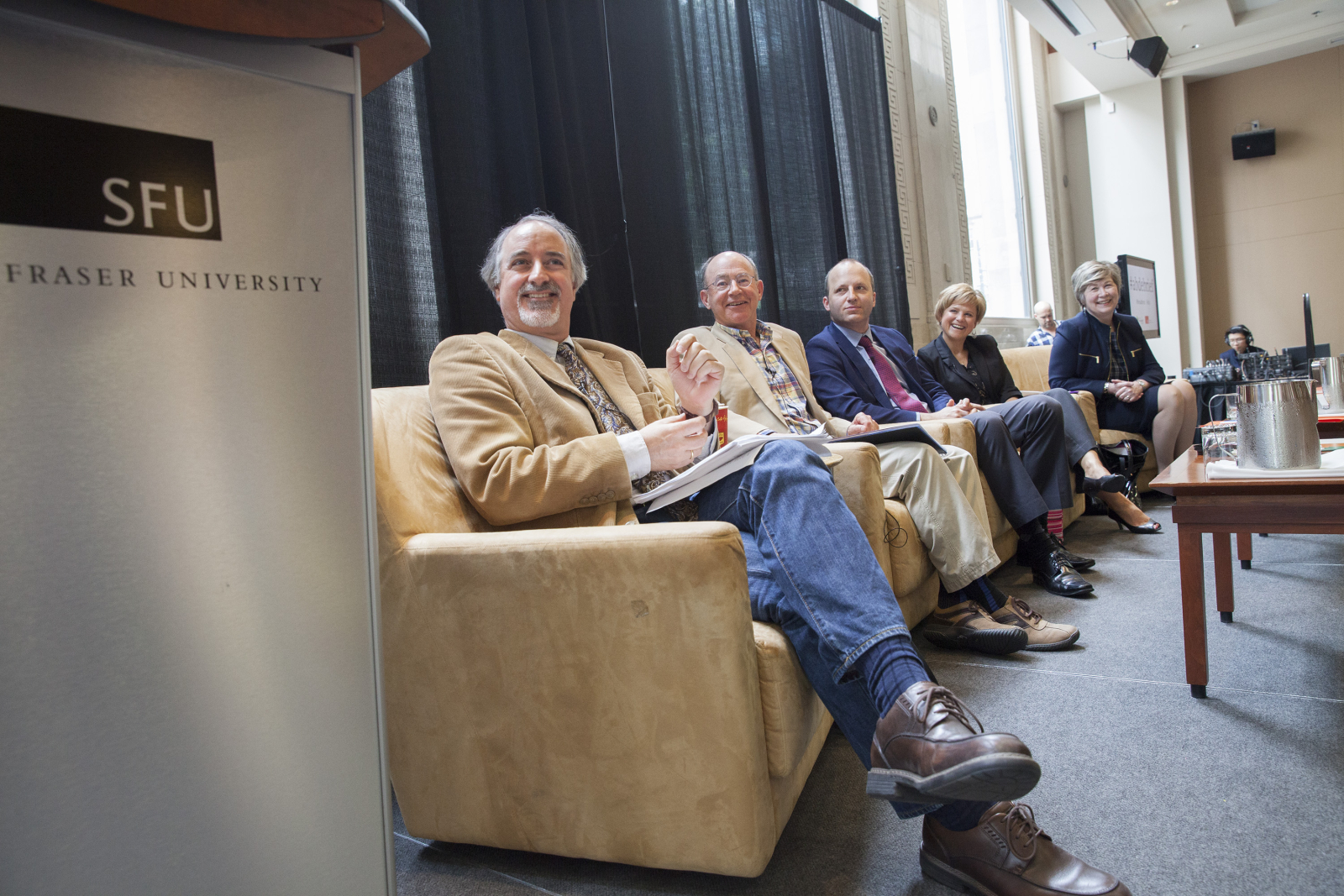 More than 200 progressives packed a downtown Vancouver forum put on by the Broadbent Institute and the SFU School of Public Policy to hear from an all-political-stripes panel to break down the historic Alberta election win, and whether the outcome bodes well for the federal New Democrats for the expected fall election.

"I’m going to go out on a limb here, and say it’s pretty good [for the party],” said Anne McGrath, former chief of staff for Jack Layton, to appreciative laughter.

“There’s no question that what's happening in Alberta has put a spring in the step of New Democrats across the country.”

The Progressive Conservative melt-down in Alberta on May 5 saw a 44-year dynasty evaporate, and handed the NDP an historic majority in the largest voter turn out in the province in decades. The outcome also smashed the idea that Albertans had to vote right-of-centre.

“This feeling that Alberta is so right-wing, so conservative… that never resonated with me,” said McGrath.

"[She] signaled something new. And before long she caught fire as a leader that could connect in a personal way with millions of people,” said Scott, who was also a former David Suzuki Foundation climate change director.

“The [NDP’s] policies were simple, straightforward to the average person,” he added.

Mike McDonald, B.C. Premier Christy Clark’s former Liberal leadership campaign manager, said Rachel Notley’s personal charm and energy made her stand out from her stodgy, male competitors. She was seen as a straight-shooting woman of the people —much the way Clark surprised everyone with her 2013 come-from-behind B.C. win, he said.

"Like Christy Clark, she brought a personal quality to the debates with the men."

Panelists noted Jim Prentice’s infamous remark asking Albertans to "look in the mirror” for the province’s economic woes, following the collapse of oil prices. That widely-publicized blunder "crystallized the P.C. [party] arrogance and insensitivity” for many people, said Scott. But the party’s problems ran much deeper, he said.

The income gap had been widening for years in the province and average working people were getting hit with higher taxes, while oil companies seemed to be getting breaks. Ordinary family challenges, like getting a local school, had become a lottery system, under years of policies dating back to the Klein years, and were not "un-done" by Prentice said Scott.

"I don’t want to be disrespectful, because I know he’s passed, but some of [Klein's] policies were nuts."

Notley announced populist and pragmatic policies for phasing out coal, increasing royalties on oil, and abandoning the Northern Gateway pipeline as unlikely to achieve support with aboriginal communities.

But former Alberta Wildrose MLA Kerry Towle reminded the Vancouver crowd that her right-of-centre party was once catapulted into an exciting position in a hurry.

She believes her party would have won the previous 2012 Alberta election if it weren't for "unfortunate" comments of rogue members about gays and climate change. The party then fell to official opposition.

Things never got much better. After Jim Prentice took over the governing PC-party helm, many inside the Wildrose party called for their leader Danielle Smith to even go harder right.

“When you know you’re starting to go down, the vultures come out.... [there was] a lot of infighting."

She, along with Danielle Smith, eventually crossed the floor to the PCs leaving the party in disarray just before the election. In this vacuum of opposition, "it created a huge space for the NDP," said Scott.

McGrath admitted the national picture is not quite the same— it's still a three-way race between Harper, Mulcair and Trudeau, she said. But just as Rachel Notley urged Albertans to vote with their values, so must the federal NDP.

"National childcare is just one election away," she said, before listing other party positions on funding for the CBC, an inquiry for missing and murdered aboriginal women, small business tax reform, and opposition to the controversial C-51 anti-terrorism bill.