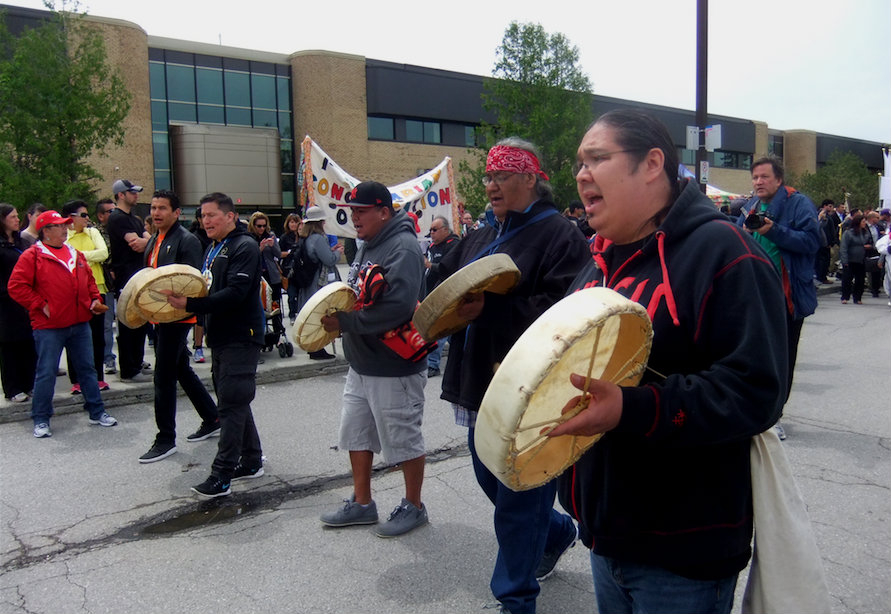 Photo of Ottawa Truth and Reconciliation
Previous story
Next story

Canadian Indigenous elders lit the sacred fire on Victoria Island as the sun rose over the Ottawa River yesterday. The island, a stone’s throw away from Parliament Hill, was made famous by Chief Theresa Spence and her hunger strike during the winter Canada was introduced to Idle No More.

By noon 10,000 First Nations, Metis, Inuit and non-Indigenous Canadians were marching in the national capital with the same spirit and determination of the Indigenous-powered movement that swept through the nation in from 2012-13.

Those from across the country who marched in Ottawa yesterday did so not in political protest, but in hopes that the gaping wounds 150 years of “Indian” residential schools have left on Canada will one day heal.

“This is the day we begin to change the history of this country,” Justice Murray Sinclair, chair of the Truth and Reconciliation Commission of Canada told thousands on the doorstep of Ottawa’s City Hall.

“Getting to the truth is hard. Getting to reconciliation is even harder.”

Former Northwest Territories premier Stephen Kakfwi, a member of the Dene Nation who participated in yesterday’s Walk for Reconciliation, knows firsthand that reconciliation and healing is not an easy road. He is a residential school survivor.

Kakfwi said it was only recently he was able to forgive the two men who abused him during the time he spent at a residential school as a child. Since forgiving his abusers he feels as if he walks lighter, sleeps better and has even become a better husband.

His wife, Marie Wilson, is one of three commissioners.

“Reconciliation is acceptance of what happened to so many of us in Canada, so we can unlock the focal tension of this country and move forward,” Kakfwi told the National Observer.

All three TRC Commissioners — Sinclair, Wilson and Wilton Littlechild – were on hand for the walk, along with Ontario Premier Kathleen Wynne, former NHLer Joe Juneau, Olympian Clara Hughes and dozens of Indigenous leaders and elders.

The march was the inaugural event of three days of closing ceremonies on the commission’s work to be held in Ottawa. After seven years and thousands of residential school survivors’ testimonies, the commission is finally prepared to deliver its report on one of the darkest chapters of Canadian history.

Premier Wynne described the residential school system as an “evil” so vile and so pandemic it has adversely impacted multiple generations of First Nations, Metis and Inuit.

“By unearthing it and truly understanding it we give ourselves the power to change the future,” Wynne said.

Premier Wynne and Justice Sinclair both echoed the words of Canada’s top judge, chief justice of the Supreme Court Beverly McLachlin, who said last week that the residential school system was an attempt at “cultural genocide” directed at the Indigenous peoples of Canada.

Over 150,000 First Nations, Metis, and Inuit children were taken from their families and forced into a residential school system designed and implemented by the federal government to 'take the Indian out of the child.' The last residential school finally closed in 1998.

At least 6,000 died from disease and malnutrition while in the residential schools, according to the Truth and Reconciliation Commission.

Abuse was widespread during those years. The commission’s findings and testimonies of survivors have revealed students were physically and sexually abused in the schools.

The Truth and Reconciliation Commission will release its final report on June 2nd in Ottawa. The report details what happened in the schools themselves as well as recommendations on how Canada can come to terms with this part of the past.

Justice Sinclair described the report as the largest oral history project in Canadian history. It is over two million words in length.

“Everybody is on a healing journey, but to heal ourselves takes practice,” Josee Whiteduck, an Anishinaabe elder from Kitigan Zibi First Nation in nearby Quebec, said. Whiteduck opened yesterday’s march with a prayer in English and Anishinaabe.

“I am hopeful for myself and for others. We all need to move on in life,” said Whiteduck.