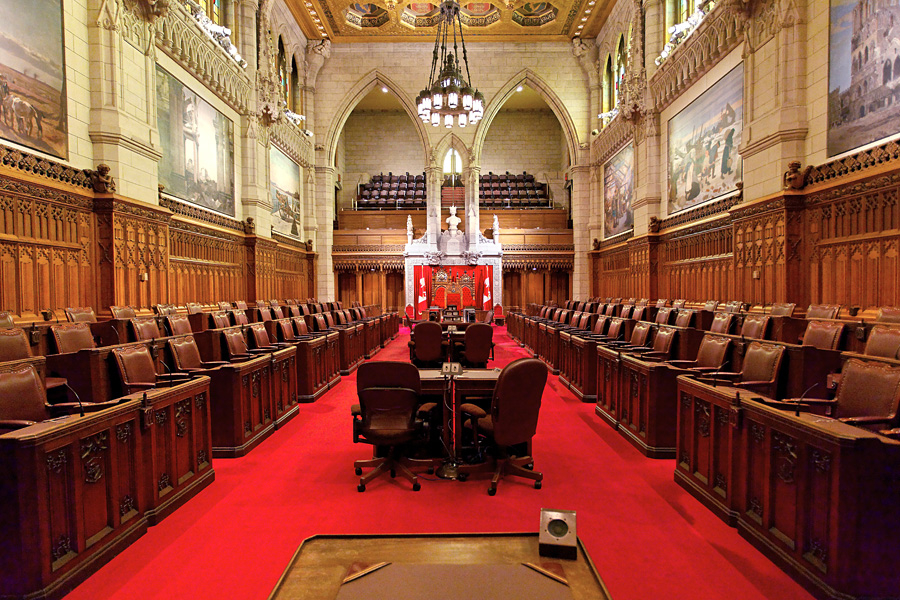 The Senate is in a renewed state of panic one day after the first bombshells from a much anticipated — and not yet public — report on Senate spending from auditor general Michael Ferguson dropped.

For the Conservatives, Friday arrives with questions about how a high-profile senator whom Prime Minister Stephen Harper appointed to be a victims-rights advocate could soon be under investigation by the RCMP.

For Liberals who have cut ties with their brethren in the Senate, there are questions about the six party members making up the largest contingent of nine misspending senators about to have a date with the RCMP.

For the NDP, which calls for abolition of the Senate, the revelations will fuel the daily attacks they level against the Tories on the Senate scandal, hoping it turns voters away from Harper and the Conservatives as the parties ready for the October election.

Top senators are expected to start on Friday to pore through all 120 pages of Ferguson's audit, which the Senate received Thursday afternoon. The Senate is set to release the report to the public on Tuesday, giving the leadership and the senators named in the report time on the weekend to ready a public response.

The answers, however, will not be easy to find.

Among those nine being sent to the RCMP are two sitting and seven retired Senators, according to multiple Senate sources:

— Gerry St. Germain, a former Conservative senator who promoted aboriginal issues, had some of his expenses reviewed in a much narrower auditor general review of Senate spending in 2012.

— Donald Oliver, the former deputy speaker of the Senate, skipped his last few days in the upper chamber before retirement rather than sit through the debates to suspend Mike Duffy, Pamela Wallin and Patrick Brazeau without pay.

— Rod Zimmer, a former Liberal senator, has attracted the limelight because of his much younger wife.

— Sen. Pierre-Hugues Boisvenu, a victims-rights champion who was appointed by Harper in 2010. On Thursday night, he declared he would sit as an Independent after confirming he's the subject of a police investigation. He had previously been cited by the Senate ethics officer for giving a job to a woman with whom he was romantically linked and repaid the Senate about $900 for housing expenses when he stayed at her apartment.

— Sen. Colin Kenny, the other sitting senator on the RCMP list, marks 31 years in the upper chamber at the end of June after being appointed by Pierre Trudeau in 1984. Kenny lives in Ottawa and has racked up hundreds of thousands of dollars in flights throughout the years.

The details behind the expense claims have yet to be made public.

Beyond the nine whose expenses are going to the RCMP, a separate group of 21 senators have thousands of dollars of spending being challenged by Ferguson. Adding to the Senate's woes on Thursday was the revelation that three of the 21 hold the most powerful positions in the upper chamber. Speaker Leo Housakos; James Cowan, the Liberal leader in the Senate; and Cowan's Conservative counterpart, Claude Carignan, will be named in the report as having problematic claims.

A staffer for Carignan repaid about $3,000 that auditors said he wrongly claimed for travel expenses. A staffer for Housakos repaid about $1,600 after a similar finding. Housakos and Cowan both plan to appeal Ferguson's finding that they repay, respectively, about $6,000 for contracts and $10,000 for travel.

Others on the list of 21 are expected to do the same, hoping former Supreme Court justice Ian Binnie uses his new role as the Senate's special expense arbitrator to recommend Ferguson's findings be quashed.

The arbitration process was not available to Duffy, Brazeau and Wallin when they were suspended from the Senate over dubious expense claims. Duffy and Brazeau, along with former senator Mac Harb, have since been charged with fraud and breach of trust while Wallin remains under police investigation.

Duffy has openly suggested he was not alone in filing questionable claims that have now landed him in hot water. His lawyer has made the argument in court that the Senate rules are, as two outside auditing firms concluded, unclear.

It's not known whether Ferguson's report comes to the same conclusion. While he is expected to focus on how senators track their own expenses, Ferguson is also expected to give recommendations on oversight in his report.