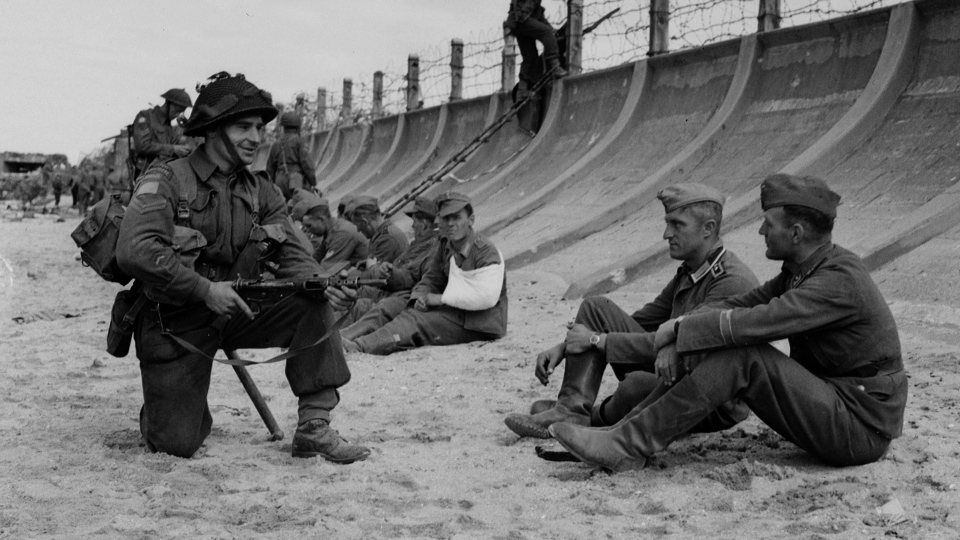 Today is D-Day. For our politicians and many Canadians, it's a day of incredible hypocrisy. Speeches will be made to reflect on our fallen soldiers, mentioning sacrifice and devotion to country. The Canadian public will hear the same remarks from last year, with a different spin, as politician after politician pays tribute using Parliamentarian feel-good words. But their words come across as empty, in light of their actions.

In less than a month, Stephen Harper's government will argue in Federal Court that our war dead were not Canadian citizens. They'll be in a legal battle against the daughter of a Canadian war veteran who has been denied citizenship rights for decades. And that's just the half of it. The Canadian government will also assert that some of our war dead were simply 'registered aliens,' despite having been born in Canada and dying in uniform for their country.

And the cherry on top? You, the taxpayer, gets to foot their bill.

There must be a hundred better ways to spend public money than going to court to assert the absurd premise that our war dead were never Canadian citizens. Instead of booting out those who gave their lives for our freedoms, why not put the money towards something more productive, like health care or education?

The federal government's stance, for years, has been that Canadian citizenship only began officially in 1947, and that no one before that date was a legitimate citizen. This, despite documents provided to Canadian soldiers clearly stating that they were going to war fighting as Canadian citizens.

And yet, no member of any political party will argue in the House of Commons to change this policy. At the very least, won’t one MP put forth a motion to formally recognize our deceased soldiers? After all, they went to war being told they were citizens. But that's simply not our government's way.

Most of our MPs are ignorant — by choice — about Canada's citizenship law. I know this only too well, from experience. When I was to testify as an expert witness before the House Citizenship committee last year, they booted me out before I could utter a single word. Other experts on citizenship were invited to share their knowledge at citizenship committee meetings, only to be denied the right to speak. The Parliamentarians prefer ignorance over knowledge. How very undemocratic.

As an advocate of the Lost Canadians — legitimate Canadians who have been denied citizenship due to outdated provisions of past laws — my group is fighting archaic and discriminatory laws from the 1800s that are still being enforced today. Citizenship bureaucrats have convinced our MPs that the big bang of Canadian citizenship began on January 1, 1947. This is completely untrue. From numerous Supreme Court decisions to legislation, from earlier Governor General and prime minister declarations, evidence to the contrary is both overwhelming and conclusive.

Canada had citizens, with rights, from the moment of Confederation. Yes, Canadians were "British subjects" (that only officially ended in 1977), but until then, citizenship co-existed with that status. How ironic it is that in 2013, the Attorney General of Canada argued — and the Supreme Court agreed — that the Métis were 'full citizens' of Canada in 1870.

It's preposterous for our bureaucrats to insist that our Canadian soldiers who died in the war were never citizens.

Their denial is not only insulting for relatives of the war dead, but causes havoc for thousands of people today. Some Canadians are being denied citizenship based on the notion that citizenship never existed before 1947. That means anyone born before that date could be subject to the discriminatory laws from yesteryear. I'll note some examples:

Guy Vallière, born in Montreal in 1926, went to his grave disenfranchised from the country he defended as a Canadian soldier in World War II, simply because he was born in wedlock. After suffering a stroke the government refused to touch his medical bills, rationalizing their rejection by saying he was property of his American father, and not his Canadian mother. Hence as a non-citizen he wasn't entitled to any help.

Marcel Gelinas, another WWII soldier, also came into this world in Montreal by way of an American father and Canadian mother. The government refuses to this day to recognize his citizenship.

Jackie Scott, now nearly seventy, is still being denied her rights as a citizen. Her crime was being born to a British war bride mother and Canadian soldier father. According to the laws at the time, she was deemed sole property of her British mother because she was born out of wedlock. Even though her parents married soon after and raised her in Ontario, she's still being denied Canadian citizenship. Scott applied twice, and was rejected both times.

Age, gender, family status, and racial discrimination is alive, well, and thriving in modern-day Canada. I mention race because the fate of the Canadian Chinese is also on the line. Prior to 1947, the federal government refused to recognize a Canadian-born Chinese baby as a citizen, choosing to label them instead as 'registered aliens.' To our Chinese war dead — and some Chinese Canadians fought in the war despite not yet having the right to vote — what an appalling way to be remembered.

Our soldiers put their lives on the line for a better, more accepting world, and against tyranny and injustice. Would any of them be proud, knowing this government continues denying citizenship to their children and some of their fellow vets, saying they aren’t worthy? I don’t think so.

It's time that Mr. Harper, Mr. Mulcair, Mr. Trudeau , Ms. May or any MP to put an end to this national travesty. Instead of making political hay with flowery speeches about D-Day, show us actions of acceptance. Our war heroes were ours. It's time we recognized them not as "aliens" or "British subjects" but as Canadian citizens.