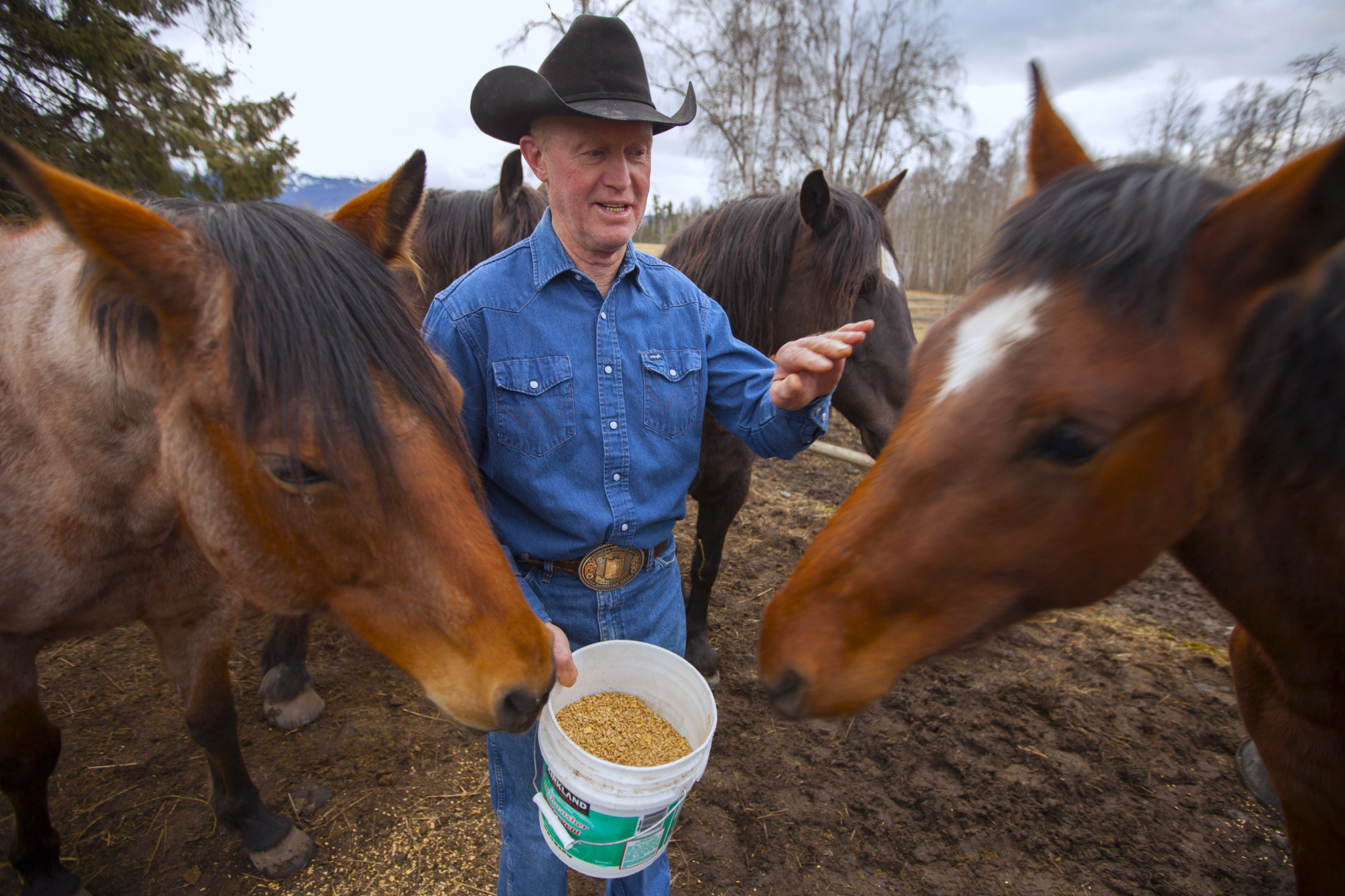 Story originally published May 13, 2014 in the Vancouver Observer.

In the Kispiox Valley 1,000 km north of Vancouver, where “No LNG” lawn signs seem to be everywhere, rancher Gene Allen had strong words for TransCanada pipeline contractors. The crews showed up on the riverbed near his $2-million lodge yet again to scope out pipeline drill work, despite his repeated requests for them not to return.

“I told him, ‘Over my dead body [you’d] ever put a drill pad in there,'” Allen recalled telling them last month.

“I just said, ‘You might as well take your papers and leave, because you can’t convince me of anything you’re doing is right,’" he said, in a recent interview with the Vancouver Observer on a mountainside near Hazelton, B.C.

Allen, who is described as "a pillar of the community” by an Oil and Gas Commission official who didn’t want to be named, opposes LNG on environmental grounds.

The business owner, who once raised 200 rodeo horses, said his objection is not only that the $5 billion pipeline would cross the Kispiox River within view of his Bear Claw lodge that attracts European and American sport fishers and hunter— and not that the 900km pipeline would cross hundreds of other rivers to pump billions of cubic metres per day of fracked gas from the northeast to the coast.

What really bothers him, he says, is how fast the LNG industry is moving in, and how little control local residents seem to have on this massive industrial push. Many here are ranchers, farmers, loggers, fishers and guide outfitters, and they don’t want what they see as their sustainable way of life destroyed.

“I’ve worked in oil and gas. It’s a boom-and-bust deal. It’s not sustainable. The sports fishing industry is sustainable, the food-fishing for the First Nations is too. That’s their life blood.”

“If this goes through – kiss it goodbye,” said Allen.

Construction of three new multi-billion dollar pipelines, by TransCanada, Altagas, and Spectra Energy, could soon slice the wilderness near his home.

But that’s not all.

The Clark government is entertaining a jaw-dropping 19 LNG proposals in British Columbia: six pipelines, 13 LNG export terminals. The Ministry of Natural Gas Development says if five of the terminals are built, $178 billion in investment will be attracted.

LNG industry summits seem to be every other week, flying in high-profile delegates from Malaysia, Korean and Japan. Next week, Shell Oil Company will fly in its President to a Vancouver LNG summit, for example.

Allen fears this LNG push will result in the destruction of the pristine wilderness country of the Skeena where his family has lived for generations since 1905.

“Let’s fast-track everything for oil and gas – for what? So we can export it to another country?" said Allen.

Historic industrial transformation of northern BC

He believes northern B.C. will soon see the largest industrial transformation it has ever seen via a massive LNG complex, with thousands of frack pads stretching from the northeast to the coast, and export terminals in Prince Rupert and Kitimat.

He and his neighbours also suspect the connecting natural gas pipelines could eventually be converted to bitumen oil transport, as they have in other parts of Canada. None of the proponents state that this is their intention.

Several First Nations, including Gitxsan and Wet’suwet’en hereditary chiefs, have spoken loudly against what they call the fast-tracking of these projects, and have staged protests and roadblocks and told drillers to leave.

“I used to have just compassion for the natives,” said retired teacher Carolyn Himmelright, in a video documenting the event. “Now I have empathy.”

“It’s the first time I’ve felt so pushed and powerless by a force outside of our area telling us what is to happen, and how it is to happen,” the Kispiox resident added.

“Originally, we’ve all been fighting Enbridge, which is about no more oil, or no more bitumen coming through the country. All of a sudden, we’re fighting six different or more LNG pipelines that are sort of showing up,” said Kathy Clay.

“You can bet your sweet biffy that we’re going to be having all kinds of fracking and wells happening in this particular area [in the Bowser Basin], which we know can contaminate water, although they’ll tell you it doesn’t,” she added.

Yet despite local concerns, the pipeline drillers have been arriving. Contractors showed up near Allen’s property with a permit signed off by two Gitxsan house representatives.

A helicopter flew in lumber and workers bored 50-metre deep holes near the Kispiox River. The work is legally permitted, and TransCanada said the activity is environmentally safe.

“The testing is to determine the technical feasibility of safely constructing a pipeline at each [river] crossing,” wrote TransCanada’s David Sherman in Calgary.

“The Oil and Gas Commission is the approving authority, and they carefully review each application to ensure it meets the appropriate standards before any activity can take place,” he added.

Spectra Energy is also drilling in the area for its $6 billion Westcoast Connector pipeline, but it did not respond to requests for comment.

Altagas said it has been consulting with local residents about its $1.5 billion Pacific Northern Gas (PNG) pipeline.

"PNG has held two open houses. One in Terrace and one in Smithers. We cannot say for certain that the Kispiox attended either of those sessions, but they certainly had the opportunity to," wrote spokesperson, Fred Cheney in Calgary.

Furious with TransCanada's test drilling, Allen invited a supervisor with the Oil & Gas Commission to the drill pad near his lodge. The commission's permit states the drilling site "is not a wildlife habitat or ungulate winter range.”

“I took that guy… and showed him all where the moose had eaten all the bark off the trees all winter, all the moose droppings, all the fresh tracks, and said, ‘This isn’t wildlife habitat? This isn’t a wintering grounds? Where do you guys get your f**king information?’

“I said, ‘Well, what do you think right now? Give me your honest opinion.’"

Echoing these concerns on Monday, local Stikine riding MLA Doug Donaldson told the Victoria legislature that LNG in B.C. does not have “social licence.”

“We’re not talking about people who are adversarial to development. These are folks who are used to hard work and living in remote, rural conditions. This is not NIMBYism. This is people looking after their own backyard,” Donaldson said.

“Multiple pipelines, five proposed across [Skeena River], with no cumulative effect study, no requirement for a common corridor, no stipulation to use already disturbed transportation corridors, no guarantee that the gas pipelines could be used for oil transport in the future.”

“Based on this context, it’s easy to see that the sustainable livelihood carried out by many constituents of Stikine, one I support, will be destroyed."

But Premier Christy Clark has long said LNG is a once-in-a-generation opportunity to get B.C. out of debt, and create 100,000 jobs. Her press release states B.C. will create the "most environmentally responsible LNG industry in the world."

UBC professor emeritus Michael Healey, who has decades of research experience with aquatic salmon, marine ecology, and watershed management, believes the climate-change effects are perhaps the most worrisome of all.

“The impact that the bonanza in oil and gas that’s resulted from fracking will have on any attempt to manage climate change is serious and sad,” he said.

“And certainly substituting gas for oil is an improvement, but if you are continuing to multiply the amounts of fossil fuels used then the impact on the atmosphere is going to be dramatic.”

A Kispiox citizens group called No More Pipelines estimates that if the three major LNG plants go forward, greenhouse gases would soar 78 per cent in B.C. That development is at odds with the province's goal to reduce emissions by 33 per cent by 2020.

"It's colossal. Each one of [the LNG plants] would produce 20 gigatonnes of CO2 equivalent," said paramedic Graeme Pole, with No More Pipelines.

"We're talking about one of these plants [being] equivalent to the greenhouse gases of Vancouver. One plant. And we're going to live downwind of three of them."

On fracking impacts, Professor Healey said the scientific "jury is still out” on how the the underground explosion of petroleum-rock to release gas and oil might adulterate fresh water supplies.

He also said the environmental risks of pipeline construction and operations can be relatively minor. Unlike bitumen spills, natural gas evaporates.

But even if the risks are minimal, he said, the large number of LNG projects only multiplies that risk, and there could be serious effects on wildlife habitat. He added that he's not comforted by recent Harper government changes that have sped environmental reviews.

"I think the changes the federal government made to the Environmental Assessment Act, the Fisheries Act, put us back more than thirty years in terms of the level of environmental stewardship, and also their requirement that environmental assessments be completed in two years.”

"TransCanada believes that natural gas transported in our new pipeline will help achieve sustainable long-term environmental benefits if this gas replaces higher carbon fuels at existing facilities or that are planned to be used at new facilities."