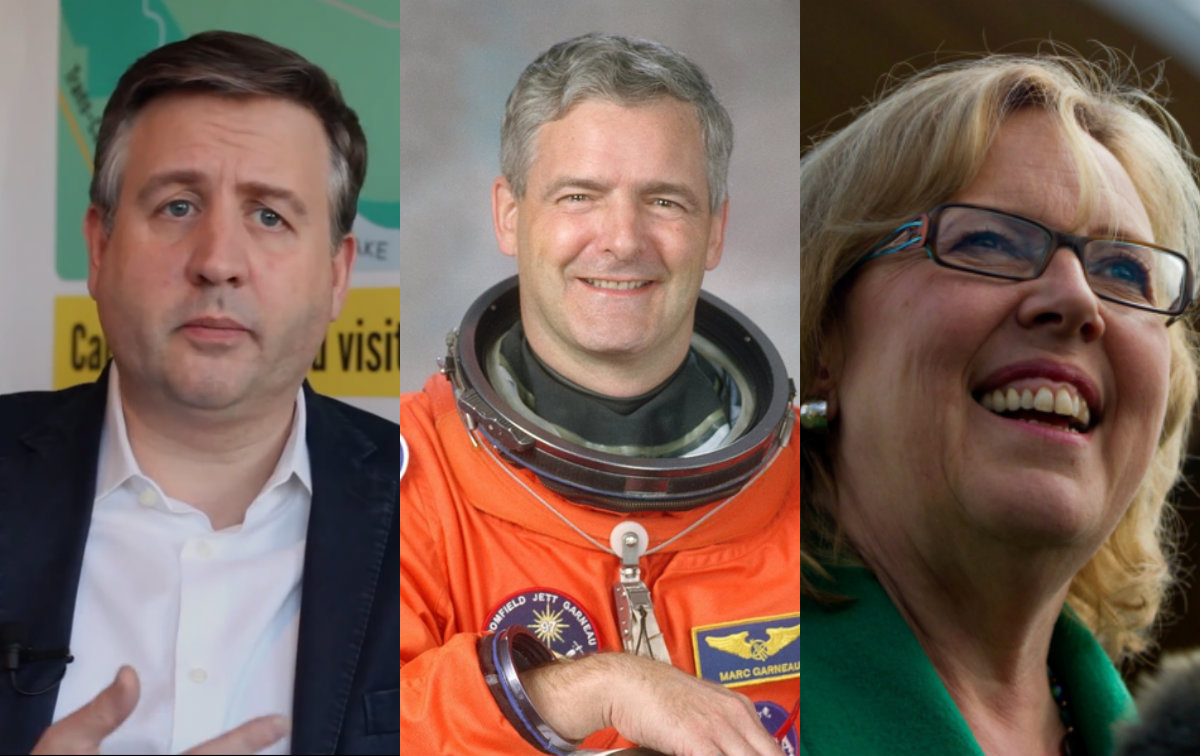 Federal MPs from three opposition parties signed a pledge in support of science-driven policies after recent protests by federal scientists against the Harper government’s cuts to departments and its muzzling of research.

Signing on at the June 16 press conference by Evidence for Democracy were NDP’s Kennedy Stewart, the official opposition’s science and technology critic, Liberal MP and former astronaut Marc Garneau, and Green Party leader Elizabeth May.

Stewart has already tabled three bills before parliament to restore Ottawa’s scientific capacity, including restoration of the long form census, an ethical code to end muzzling of scientists, and the creation of a parliamentary science officer with the powers of an auditor-general.

Such an officer would be independent once appointed, be able to privately advise the prime minister on policies, and have greater powers than the previous adviser that existed under the former Liberal government, Stewart said.

But the NDP have a tough road ahead even if they are elected this fall, as they will have to tackle what Kennedy said was more than $1 billion in cuts to scientific funding and the firing of more than 4,000 scientists and researchers, which he said amounted to 15 per cent of government science staff.

“For me, it’s been a no-brainer for a long time — the importance for science to guide us in policy-making. Of course, that means all scientists being able to express themselves, but this government has muzzled them,” Garneau said just before the conference.

He slammed the Harper government’s elimination of the long form census in as an example of cuts to research that help build Canada’s ‘social database’, saying that it made no sense and was “a typical example of how this government just doesn’t understand science.”

He also condemned Harper’s decision to cut funding for the Experimental Lakes area in northern Ontario, saying that they provide provided vital data on acid rain and the effects of phosphates leeching into water, as well as the Polar Environment Atmospheric Research Laboratory (PEARL) Arctic Research Facility, which provided information on ozone layer depletion in the far north.

Garneau said that funding for scientific research and departments had to be maintained even if the government received information it did not like, promising that scientists would be unmuzzled if a Liberal government was elected on Oct. 19.

A new Liberal government would create an online ‘central portal’ for all Canadians to access scientific research, as part of Liberal Leader Justin Trudeau’s pledge for an open and transparent government if elected, he said.

Scientists working for the federal government must receive permission to speak to media or to submit peer reviews, according to Elizabeth May.

“I used to work in the Government of Canada in the eighties for the Ministry of Environment and there was absolutely nothing like government scientists getting permission from the minister’s office to give interviews for media,” she said.

She condemned the gutting of departments such as Environment Canada, Parks Canada, and Fisheries and Oceans. “It’s an anti-science government."

Evidence for Democracy is pushing back in the run-up to October’s federal election by promoting the implementation of a new government-wide communications policy to ensure that government scientists can speak publicly about their research and creating a new federal science office to advise decision-makers, according to a media release dated June 16.

“Scientists are now supporting this issue publicly,” Dr. Katie Gibbs, Executive Director of Evidence for Democracy, said. “To my knowledge this is the first time Canadian scientists have mobilized to promote science as a federal election issue. The Pledge invites Parliamentarians and the broader community show their support for public-interest science and evidence-based decision-making.”

“The trends we’ve seen in recent years are deeply troubling to many in the scientific community,” Dr. Scott Findlay, Associate Professor of Biology at the University of Ottawa and Evidence for Democracy Board member, said. Trends include, "funding cuts to science, government scientists not being able to speak about their work, and decisions that appear to play fast and loose with scientific evidence."