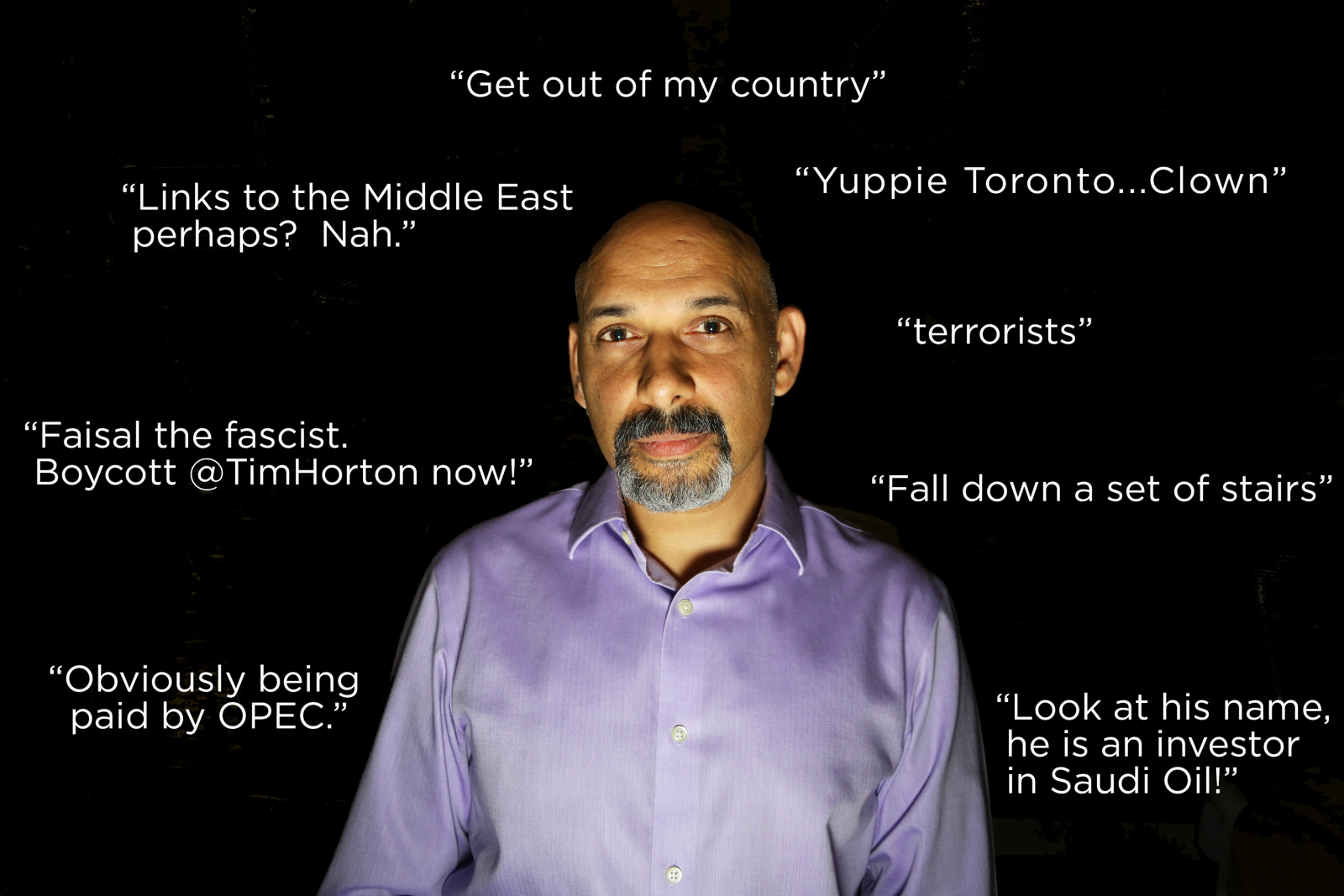 When Dr. Faisal Moola tweeted at Tim Hortons on June 4, little did he expect the Twitter tsunami of ugly and racist abuse that ensued.

Moola, an adjunct professor in the University of Toronto's Faculty of Forestry, swiftly became a casualty of a vicious digital propaganda war that erupted after Tim Hortons chose to terminate its agreement to host Enbridge ad on its in-house TV screens.

The ecology scientist, who doubles as the David Suzuki Foundation's Director General of Ontario and Northern Canada, was slammed with more than 1,300 tweets. Critics called him anti-Canadian, foreign funded, and an Arab with obvious Middle Eastern oil connections. Some told him to “get out of my country” and “fall down a set of stairs.”

"I was being vilified as, ‘you have no credibility to speak about this issue', because you are an Arab. You come from a country that benefits from conflict oil. You are a threat to the country, to the country’s economy and such," he said.

Ironically, Moola is not an Arab. He was born in Thornhill, ON., is the son of South African immigrants, loves camping, follows the Leafs and grew up playing in rock bands so loud that the 44-year-old PhD is now hard of hearing.

The digital attacks against him began shortly after Ezra Levant tweeted a mobile-phone screen grab of Moola's profile and brown-skinned photo, and transmitted them to tens of thousands of followers.

Within minutes, Moola’s phone started beeping every few seconds and minutes with Twitter mention alerts. This continued for nine hours. By the evening, Faisal Moola had become a top trending topic on Twitter in Canada.

“They are essentially trying to screw with your head,” Moola said, from Toronto.

“Fortunately I’m able to brush this off. But how can we have credible discussions about the oil sands that are not easy if our opponents are not willing to debate on us the facts, and are willing to vilify and dismiss us and actually do us harm?"

The speed and viciousness of the digital attacks against Moola suggest the hands of well-connected, right-leaning politicos and energy industry operatives, said Richard Littlemore, author of Climate Cover-Up, which details how oil propagandists and climate denial public relations works.

“There are whole teams of people who do nothing other than go online and create vitriolic counter attacks so that reasonable people stay the hell out of the conversation, because they want to stay out of the muck," he said from Vancouver.

New digital analysis by Boston and Ottawa university academics reveals which Twitter users were most digitally influential among those who used the #BoycottTims hashtag. After mentions of @TimHortons, the top five were:

Ezra Levant is a long-time conservative provocateur and broadcaster. He tweeted 147 times, and stirred at least 1,123 other users in response.

Levant said none of his attacks were xenophobic, and that Moola was “playing the little lamb."

"I obviously don’t agree with any racial epithets thrown at him. I have never described Moola’s race or religion. To me, his central identity is that of environmental extremism, which I suspect is his most important self-identity,” wrote Levant in an email to the National Observer.

Levant added, his attack was mainly about criticizing the Tides funding that flows to Moola's employer, the David Suzuki Foundation.

The foundation, in response, says its funding from Tides is a mere sliver of its $10 million budget, or about 0.2 per cent of its total funding.

By contrast, the Harper government is spending $35 million on lobbying and advertising to promote exports of Canada's resources, much of that for pushing TransCanada's Keystone XL in the U.S.

Meanwhile, Moola is now filing a "hate incident" complaint with the National Council of Canadian Muslims, which is mapping anti-Muslim hate incidents in real-time with a new online tool in development.

Canadian Muslim leader Shahina Siddiqui worries that some in this online debate are stirring Islamophobia with the idea that it's good for the Canadian oil business to do so.

The second most digitally influential Twitter user in the #BoycottTims stream was Rebel Media —an upstart online media platform set up by Levant and Prime Minister Stephen Harper’s former manager of strategic planning, Hamish Marshall, according to Industry Canada records.

"I am on the Board of Directors of the Rebel. However, I am not involved at all in the content production and editorial side of things. My involvement is on the business side," Marshall said.

"I'm a conservative and an activist, so its no surprise that I do business with the people I know, who tend also to be conservatives, but not exclusively so,” he said.

Marshall’s wife, Kathryn, was also once an Ethical Oil spokesperson, who infamously refused to answer direct questions by former CBC TV host Evan Solomon about who funds the group, including whether Enbridge does.

The third most mentioned user was Stephen Taylor, a Conservative party strategist. The fourth and fifth were self-appointed oil industry promoters.

Watching the Timmie’s tempest unfold online was University of Ottawa communications professor Patrick McCurdy, who is studying the evolution of oil sands advertising and public relations.

What he noticed in the backlash was an attempt by pro-oil promoters to use industry employees in defence of the industry.

“The overall strategy that oil companies are now taking is...to get advertising campaigns where you are getting employees to have a buy-in in this campaign.”

"In that way, ‘when you attack my company, you’re attacking me personally’,” he said.

“One user said he his company of 2,000 plus employees sent an internal email saying feel free and go and support this boycott.”

Ironically, Moola says he had nothing to do with the actual group that created a petition of 28,000 signatures to pressure Tim Hortons to drop its Enbridge ads.

The petition was created by SumOfUs —a "global movement of consumers, investors, and workers all around the world, standing together to hold corporations accountable for their actions.”

Its Canadian operations —including the Tim Hortons campaign —are 100 per cent funded by small donations, confirmed a Vancouver spokesperson, despite allegations to the contrary.

On the day they declared victory after Tim Hortons pulled the Enbridge ads, the group claims they received a death threat.

“[The email] said something to the effect of ‘f**k you, if you ever step foot in Alberta', we will shoot you,” said SumofUs senior campaigner Emma Pullman.

SumofUs has reported the incident to the Vancouver Police.

The attacks aimed at Moola's ethnicity were at odds with advice from some of the biggest oil defenders in North America.

In April, the Canadian Association of Petroleum Producers (CAPP) invited Deryck Spooner, a senior director of the Republican-aligned American Petroleum Institute, to talk about mobilizing public support for the oil industry.

Spooner stressed that one of the main challenges the oil industry faces is the public perception of the industry's support base as being older, "white," "male" and "conservative." He encouraged people attempting to win public support for oil and gas projects to reach out to women and racially diverse communities.

Tim Hortons and Enbridge did not respond to requests for comment.

Note: the article was updated with clarification information by the David Suzuki Foundation, regarding its Tides funding.