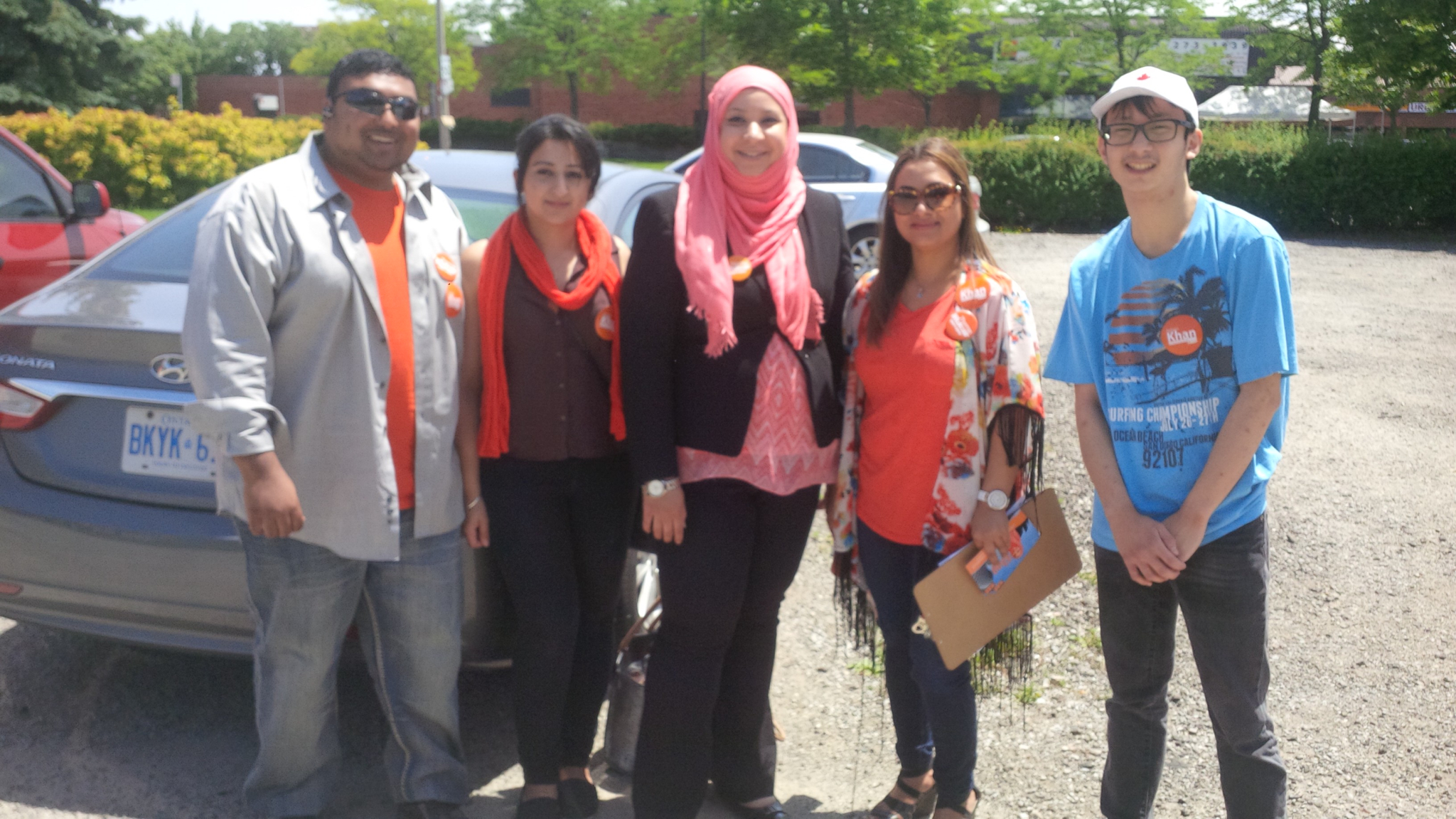 Bill C-51 received royal assent just two days earlier, but Farheen Khan, a first-time candidate who is running for the NDP in the Oct. 19 election, is vowing to keep up the fight to repeal the new legislation that many say violates the Charter of Rights and Freedoms.

“As far as C-51 goes, many people were not aware of what C-51 is and how it affects them on a daily basis," said Khan, who is standing in Mississauga-Centre. "Our goal in this campaign is also to ensure that people are aware of its repercussions so that we can encourage them to vote for the NDP in the upcoming election, where we will then have the ability to repeal the bill."

The Mississauga--born social worker, author and activist said educating people about the possible impact of C-51 was important, as many people thought it would not impact them. Even though both her father and uncle worked for the Toronto Police, Khan does not support the controversial bill, which would significantly increase government surveillance powers without an increase in oversight.

Khan has previously tried alerting her prospective constituents to C-51’s provisions discussing the legislation at her local mosque and holding a previous Day of Action in March that brought roughly 400 people onto the streets of downtown Mississauga, as well as through old-fashioned door-knocking.

She said that party leader Thomas Mulcair opposed the bill early on, unlike Justin Trudeau’s Liberals who voted in favour of C-51 in the House of Commons.

The only Liberals who opposed it were those in the Senate, but they were outvoted 44-28 in the June 9 vote.

“Once we’re in Parliament, then really it’s just about working with Tom [Mulcair]. He’s already made that commitment and all the NDP candidates across Canada would agree that Bill C-51 needs to be repealed,” said Khan.

The Canadian Security Intelligence Service (CSIS) can now disrupt suspected terror plots instead of simply gathering information, for example by interfering with bank accounts or targeting extremist websites, according to a June 18 CBC report.

The report also says that CSIS can also ask judges for approval in cases where their measures would breach legally protected rights and freedoms, but many are worried about the lack of checks and balances to prevent potential abuses of power.

The new law clamps down on anyone sharing terrorist propaganda, such as Islamic State beheading films, and gives judges the power to order computer administrators to remove any such material, hand over copies, and identify those responsible for posting it. Again, potentially broad definitions of terrorism have some worried that people could be unnecessarily caught in the government’s dragnet.

Police now have the power to preventatively arrest people that they suspect may carry out terror attacks. Under the previous law, police could only arrest people who were about to launch attacks.

Also, any person deemed a threat to national security may have their information shared between up to 17 different government departments, such as the Canada Border Services Agency or Revenue Canada.

Lawyer and constitutional expert Rocco Galati previously vowed to launch a court challenge against Bill C-51 if passed, but other legal organizations are not revealing what they plan to do.

“At this time, we decline to comment on our next steps,” Jonah Kanter, communications and advocacy specialist for the Canadian Civil Liberties Association (CCLA), said.

Nonetheless, the CCLA has previously lodged submissions against C-51 stating that previous anti-terror laws were in their view adequate, as evidenced by the testimony of RCMP Commissioner Bob Paulson when he spoke before the House of Commons Committee regarding Parliament Hill terrorist Michel Zehaf-Bibeau.

The CCLA also raised objections over the inadequate number of witnesses allowed to speak before parliamentary committees and the limited time allotted to hearings, and joined with other human rights groups calling for the bill’s withdrawal.

Kanter’s comments were echoed by the Law Society of BC (LSBC), who said that they were not planning any action against C-51 at present.

Steven Blaney, minister of Public Safety and Emergency Preparedness, said that the law provided additional protections to Canadians from an ever-evolving terrorist threat.

“Recent attacks on Canadian soil in Saint-Jean-sur Richelieu and at our National War Memorial and Parliament buildings in the heart of our democracy are reminders that jihadi terrorism is a global threat, and that Canada is not immune to the menace of terrorist organizations like ISIS. Our Government’s top priority is ensuring the safety and security of all Canadians. With the Anti-terrorism Act, 2015, we are providing police forces with the additional tools they need to prevent, detect, deny and respond to the threat of jihadi terrorism while fully protecting our civil liberties. Without security, there can be no liberty, and our Government knows that these measures serve to protect both,” said Blaney after the law’s enactment.