Twenty-five years since Oka: do we have the courage to recognize injustice and act? 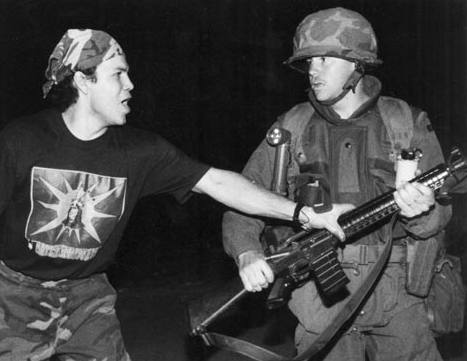 A Mohawk warrior confronts a soldier in Kanesatake on September 26, 1990, during the Oka crisis
Previous story

Twenty-five years ago, I sat in the auditorium of the Royal Ontario Museum with tears streaming down my face as I listened to Ellen Gabriel of Kahnesetake First Nations say: “Oka is not about a golf course. It is about children being torn away from their families and put in residential schools. It’s about our communities struggling for decades for basic rights, for self determination, for justice.”

I would like to say that from that moment on all of my actions reflected this dawning awareness of injustice within our own country, of my own privilege and the need for deep reconciliation with Indigenous peoples that recognizes the importance of supporting the right to culture, language and land. They haven’t, and they don’t. Here is the thing about colonialism, privilege, and racism. It's insidious, it’s built into unjust systems, and normalized. I’ve discovered over the years that it takes constant vigilance and work to truly face and begin to address injustice — it’s sticky like glue, and invisible when it dries.

Yesterday was National Aboriginal Day and I offer that now is a good time to reflect and challenge some of the pervasive assumptions and ideas that continue to uphold a system that is by its very nature unjust. It's a good time collectively and individually to recognize that we need to change how we act, what and who we support, in order to see change happen. We need to have the courage to recognize when the path we are on is not the right path and try to set off in a new direction even if it holds unknowns and might be messy, or even expensive. The fact is, the path we are on is already, complicated, messy and expensive – and it’s not working.

Over the past several years, we have seen a proliferation of First Nations lawsuits over resource development in Canada. There are now dozens of lawsuits over mining, forestry, the Site C dam, the expansion of the oil sands, the Enbridge and Kinder Morgan pipelines. Despite the fact that First Nations communities in Canada have the highest unemployment rate, the highest suicide rates, some of the highest poverty rates and the fact that many remote communities do not have reliable access to clean water and healthy food, across the country Nations are mustering the resources to go to court. They are saying no to multi-million or even billion dollar bribes and buy-outs.

Nations like the Lax Kw’alaams members who voted unanimously to reject a $1-billion cash offer from Pacific NorthWest LNG, are turning down these bribes because of their connection to the land and their recognition of the environmental damage these projects present. We would do well to heed their concerns.

The idea that First Nations should have to go to court to enforce their Treaty rights, protect their homes, to reinforce their definition of free, prior and informed consent is an astonishing embarrassment and failure of our ability as a country to ensure reconciliation. The bottom line is free, prior and informed consent must be a shared definition or we are upholding a lie. These are complex issues but the longer we avoid the real conversations and our own government spends our money fighting First Nations in court, the more complicated they become.

The Idle No More protests in the last couple of years were a shot across the bow. First Nations communities across the country feel the cumulative impacts of industrial projects like the oil sands and the impacts of climate change first and have fewer resources to address these issues. They are the frontline, and that frontline is standing up and saying enough is enough.

As a nation, we need to stop trying to ‘problem-solve’ individual resource ‘skirmishes,’ and stop thinking that public apologies, photo-ops and cheques are going to get us on the right path.

This month Supreme Court Chief Justice Beverley McLachlin and Justice Murray Sinclair of the Truth and Reconciliation Commission referred to our historical treatment of Aboriginal peoples as an attempt to commit ‘cultural genocide’.

A pathway for reconciliation has been laid out in the United Nations Declaration of Indigenous Rights. When this was introduced in 2007, Canada was one of a handful of countries that refused to support the Declaration. We reversed that position in 2012 but have yet to create a plan for adoption and implementation. This must be a priority for our nation.

After twenty-five years, this year I had the opportunity to hear Ellen Gabriel speak again. Sadly, on the anniversary of the Oka stand off Ellen is busy fighting against the Energy East pipeline being pushed through her traditional territory as she and many indigenous people are concerned about the expansion of the oil sands and the risks of oil spills and water contamination from the pipeline. I asked her one evening what her vision of the future was. She gave me a gentle and tired smile and then shifted my worldview again a quarter of century later: