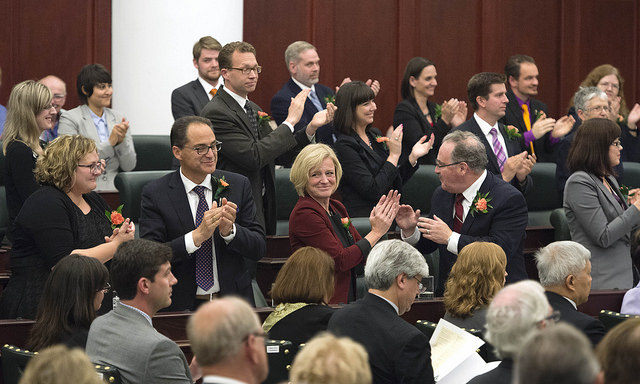 Things are changing in the land of the petroleum producers and tar sands.

At the same time, it announced that Dr. Andrew Leach will chair an advisory panel that will comprehensively review the province’s climate change policy, consult stakeholders and provide advice on a permanent set of measures.

Leach is an associate professor and academic director of energy programs at the University of Alberta School of Business. He is also currently the Enbridge professor of energy policy at the university.

The panel will meet with Albertans over the next three months and examine how the province can lead on the issue of climate change.

The government in a news release said that it is taking these steps to demonstrate its commitment to leadership on climate change, with a goal of having a preliminary proposal ready in time for the COP21 world summit in Paris at year-end.

Currently, the province requires any facility that emits 100,000 tonnes or more of greenhouse gases a year to reduce their emissions intensity. To date facilities must reduce it by 12 per cent.

The Calgary-based Canadian Association of Petroleum Producers (CAPP) said it "appreciates" the new rates under Alberta’s revised Specific Gas Emitters Regulations (SGER) will be phased-in over 18 months and money raised will continue to flow to the technology development fund. But CAPP noted that the revised rules for SGER and Alberta’s recently announced corporate tax increase have the potential to add almost $800 million to industry costs over the next two years.

Despite its concerns over the impact of the SGER to the industry's bottom line, CAPP said that Canada’s oil sands producers are prepared to take a greater leadership role on climate action as part of the growing global intention to reduce greenhouse gas emissions.

“We developed the technology to get the oil out of the sand – and we are just as committed to getting our carbon out of the air,” said CAPP president, Tim McMillan.

Dan Woynillowicz, director of policy for Clean Energy Canada, praised the announcement, calling it a welcome departure from the previous government’s persistent delays.

“Today’s announcement sends a clear and critical message to industry and Albertans: This is a first step; expect more robust climate action to follow,” Woynillowicz said.

He added that Clean Energy Canada will look forward to a strong and effective number of policies later this year from the province.

Ed Whittingham, executive director of the energy think tank, the Pembina Institute, commented that the province’s commitments to set a higher price and target for carbon pollution on a set schedule and to follow it with broad-based consultation is encouraging.

However, he tempered his comment, adding: “Of course, it will take more than the changes today for Alberta to credibly do its part to tackle climate change.

Whittingham said the province’s climate change strategy should include reduction of overall emissions from the oil and gas sector, the acceleration of the phase-out of coal-fired electricity; and an increase in the supply of renewable energy.

Greenpeace’s Mike Hudema was less impressed with the announcement. In a blog post, the Greenpeace activist criticized the province for saying it wanted to be a climate leader while talking about expanding pipelines and building new refineries.

“Alberta can’t have it both ways,” Hudema wrote. “You can’t double down on one of the nation’s largest sources of carbon emissions and still be a leader on the climate.”

“For years, the previous government failed to develop a meaningful strategy to deal with the important issue of climate change and we are going to do things differently,” Phillips said.

The government also indicated they plan to strike a panel to review how Albertans, who it called the “owners of our oil and gas resources,” will receive a fair return for development of those resources.

The province said more information on the royalty review will come soon.