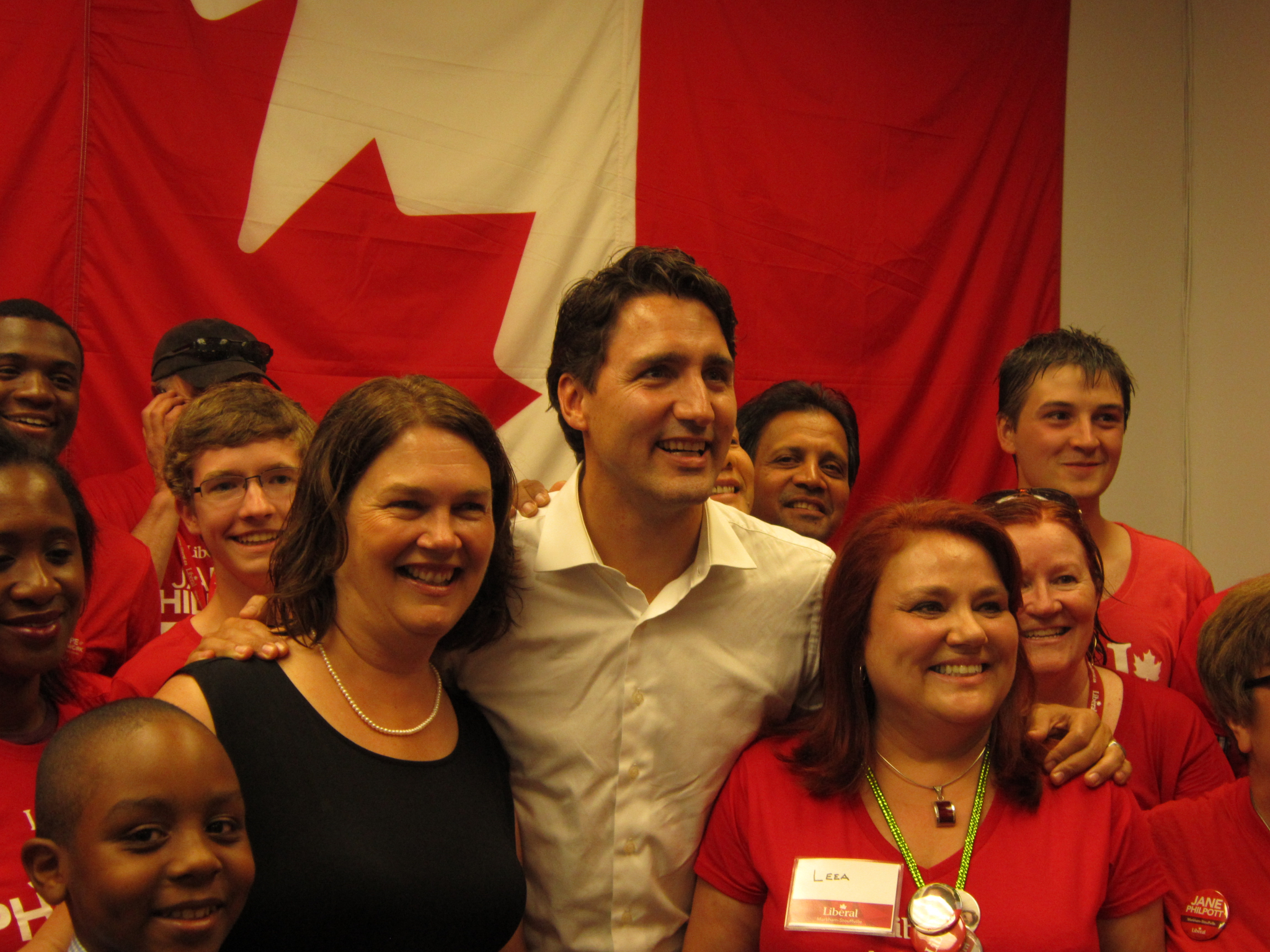 Jane Philpott with Justin Trudeau and her volunteers in Stouffville on June 18. (Photo: Fram Dinshaw)
Previous story
Next story

Veteran Grit Omar Alghabra must tread a political tightrope with a gymnast’s finesse in the run-up to the Oct. 19 federal election, as he campaigns to unseat the Tories while fending off the NDP’s Farheen Khan to return to Ottawa after seven years of public service.

Alghabra, who is running for Justin Trudeau’s Liberals in the swing riding of Mississauga Centre, is campaigning on a platform of boosting the fortunes of the middle class who have often struggled to make ends meet in the years since the 2008-09 recession. Canada’s economic recovery has, in his view, mostly benefited the rich.

Such job creation can also be channelled into a greener future with investments in renewable energy, with Ontario already drawing upon its manufacturing history leading the way in developing alternate fuel sources, according to Alghabra.

Investing in both the middle class and a greener future is a message that he hopes will resonate in a swing riding where Tories and Liberals have vied for power over the last decade, a political battle played out across the Greater Toronto Area (GTA), from Mississauga to Markham.

Alghabra’s riding of Mississauga Centre, home to nearly 120,000 people, was carved out of the old constituencies of Bramalea-Gore-Malton, Mississauga-Brampton-South, and Mississauga Streetsville, as part of the federal boundary redistribution that boosts the number of electoral ridings from 308 to 338 that are in keeping with population increases. 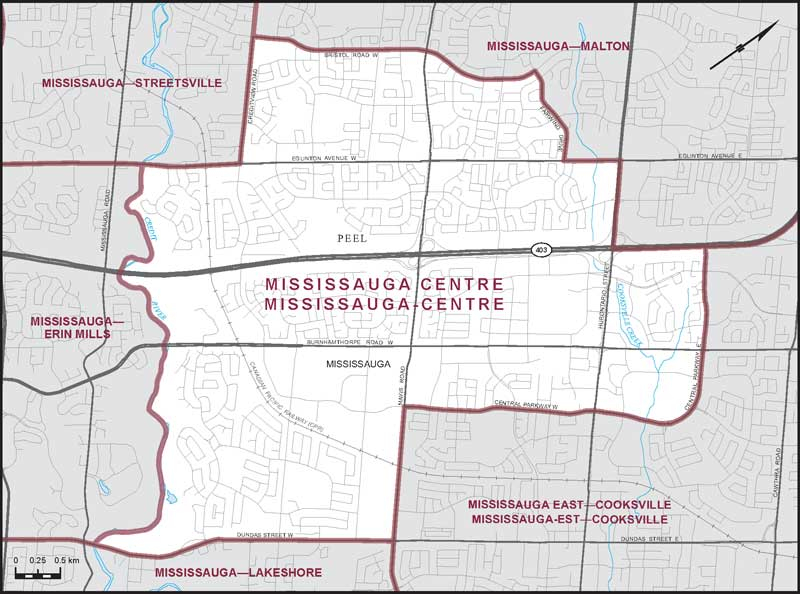 In February, Liberal fortunes in the area received a boost, when Mississauga-Brampton South MP Eve Adams crossed the floor to join Trudeau’s party.

Alghabra, a mechanical engineer by trade, served as an MP from 2006-08 in Mississauga Erindale before being ousted by Conservative Bob Dechert.

While he has his own political experience to draw on, he faces a strong left-field challenge from the NDP’s Farheen Khan, who is running on a platform of affordable living, building a stronger economy, and creating a safer Canada, not altogether dissimilar from Alghabra’s pre-election pitch.

But Thomas Mulcair’s NDP is also promising more funding for city infrastructure, including road and transit improvements, and creating a new Minister of Urban Affairs to oversee investments. Khan said that she would advocate on behalf of her constituents for greater infrastructure investments in her riding if a new NDP government rolls out the new ministry.

If implemented, both in Khan's riding and across Canada, such infrastructure will also help wean people off cars and onto greener forms of transit, helping to mitigate the issue of climate change that was brutally illustrated for Mississaugans in severe flooding that overwhelmed storm drains two years ago.

She is also campaigning on the hot-button issue of anti-terrorism Bill C-51 (Trudeau voted for the bill), the government’s increasingly unpopular anti-surveillance law that many say violates the Charter of Rights and Freedoms.

So far, Khan has spearheaded two ‘Days of Action’ against C-51 in Mississauga, including a protest in March that drew 400 people onto the streets, followed by a door-knocking campaign on June 20, just two days after the law received royal assent.

While Thomas Mulcair’s NDP have pledged to repeal the entire law if they are elected on Oct. 19, Alghabra, in line with his party’s stance on C-51, is taking a different approach.

He said that a new anti-terror law was needed to criminalize recruitment by terrorist outfits, stop people who want to travel to join groups like the Islamic State, and share information across different agencies, which Alghabra said was one of the recommendations of the Arar Inquiry.

“The fact of the matter is that there are some parts of Bill C-51 that keep us safe,” said Alghabra.

The Liberals have tempered their support of Bill C-51 by promising greater oversight of police and spy agencies in using their new powers, if they form Canada’s next government, but were nevertheless pilloried by large segments of the public for backing the Harper Government's controversial anti-terror legislation.

In addition, Liberal MP Wayne Easter proposed amendments limiting information-sharing to just 17 government agencies and disallowing the Canadian Security Intelligence Service (CSIS) from obtaining a warrant for activities that violate the Charter of Rights and Freedoms.

“It’s so unfortunate today that there’s no room for nuance in today’s politics,” said Alghabra, likening the debate over C-51 to when former US President George W. Bush told people that “you’re either with us or with the terrorists,” in the immediate aftermath of 9/11.

Nonetheless, both Khan and Alghabra, together with their respective parties, agree on the need to repeal Bill C-24, which gives a government minister unchecked powers to revoke the citizenship of dual nationals. Previously, only an immigration judge could strip someone of their citizenship.

First introduced as a private member bill in 2012, the Harper Government succeeded in making Bill C-24 law earlier this month, another potential hot-button issue in Mississauga with its high number of recent immigrants and new citizens.

“The Liberals opposed it, Justin Trudeau has spoken out against it and promised to repeal it,” said Alghabra.

Roughly seventy km northeast of Mississauga, C-24 is a less pressing issue for Alghabra’s fellow Liberal candidate Jane Philpott, who is running for office in Markham-Stouffville where fewer immigrants live, compared to Mississauga.

The Liberal platform of economic fairness is still high on Philpott’s agenda and she criticized Stephen Harper's handling of the economy, in her view an overblown triumph for the Tories.

“Their track record is actually not good, while they try to pass themselves off as good fiscal managers, they only put out a balanced budget this year and they did that by borrowing from a contingency fund and selling off public assets,” said Philpott.

Regarding the environment, she said that the issues affecting her riding were in line with those impacting Canada, but criticized the federal government's lack of attention to climate change and it's failure to co-operate with the provinces.

In addition, she castigated Stephen Harper "for not being inclined to bring together the concerns," of the traditional energy sector and clean energy advocates, leaving him unable to advance on either front.

"One of the biggest issues is that there's no cost-benefit analysis on renewable energy," said Philpott.

Her riding is also new for 2015, having been carved out of the old Oak Ridges-Markham unit that is currently represented by Conservative MP Paul Calandra.

First created in 2004, Oak Ridges-Markham is another swing area, which was held by the Liberals until they lost to Calandra in 2008.

However, Philpott is determined to reclaim her hometown for the Liberals one household at a time, saying that her 16 years as a family doctor in Stouffville prepped her to listen to and understand people’s concerns.

“Liberal strategy overall goes back to basics, which I’m more than happy to do and that means going out and meeting people, going door to door,” said Philpott.

Unlike Alghabra, who is facing both an incumbent Tory MP and a well-organized NDP rival that may split the anti-Tory vote, Philpott will likely not face a strong challenge from her left.

People will be able to see, if they vote for me and the Liberal team, they will see someone who’ll know the community and has a track record of getting things done,” said Philpott.

In 2011, Calandra was returned to office with 51.2 per cent of all votes in Oak Ridges-Markham, while then- Liberal candidate Lui Temelkovski placed second at 28.1 per cent, and the NDP trailed third.

In 2008, the Tory-Liberal race was neck and neck, when former incumbent Temelkovski lost his seat to Calandra by just 545 votes, according to a May 3 Toronto Star article.

Mississauga and Markham are home to just two of a swathe of ridings that turned blue or orange in 2011, as the Tories and NDP gobbled up traditional Grit territory in Toronto proper and the GTA, but boundary changes shift the balance yet again

In the new riding of Brampton East for example, the Conservative’s 2011 win in Bramlea-Gore-Malton would translate to an NDP win with the Liberals placing second.

Don Valley East would also flip from a Tory victory to a Liberal win, under the new boundaries.

Nonetheless, the new boundaries would mostly benefit Conservatives, who would have won 22 of the 30 new ridings, simply because they already held the most seats and many boundary redistributions were drawn up in fast-growing suburbs where the Tories performed strongly in 2011, according to polling expert Eric Grenier, who was quoted in a July 16 Metronews article.

He said that the new boundaries were drawn up by non-partisan commissions with public input and did not involve US-style gerrymandering of federal ridings.

The National Observer tried calling the office of Paul Calandra for his party’s perspective but there was no reply before press deadline.