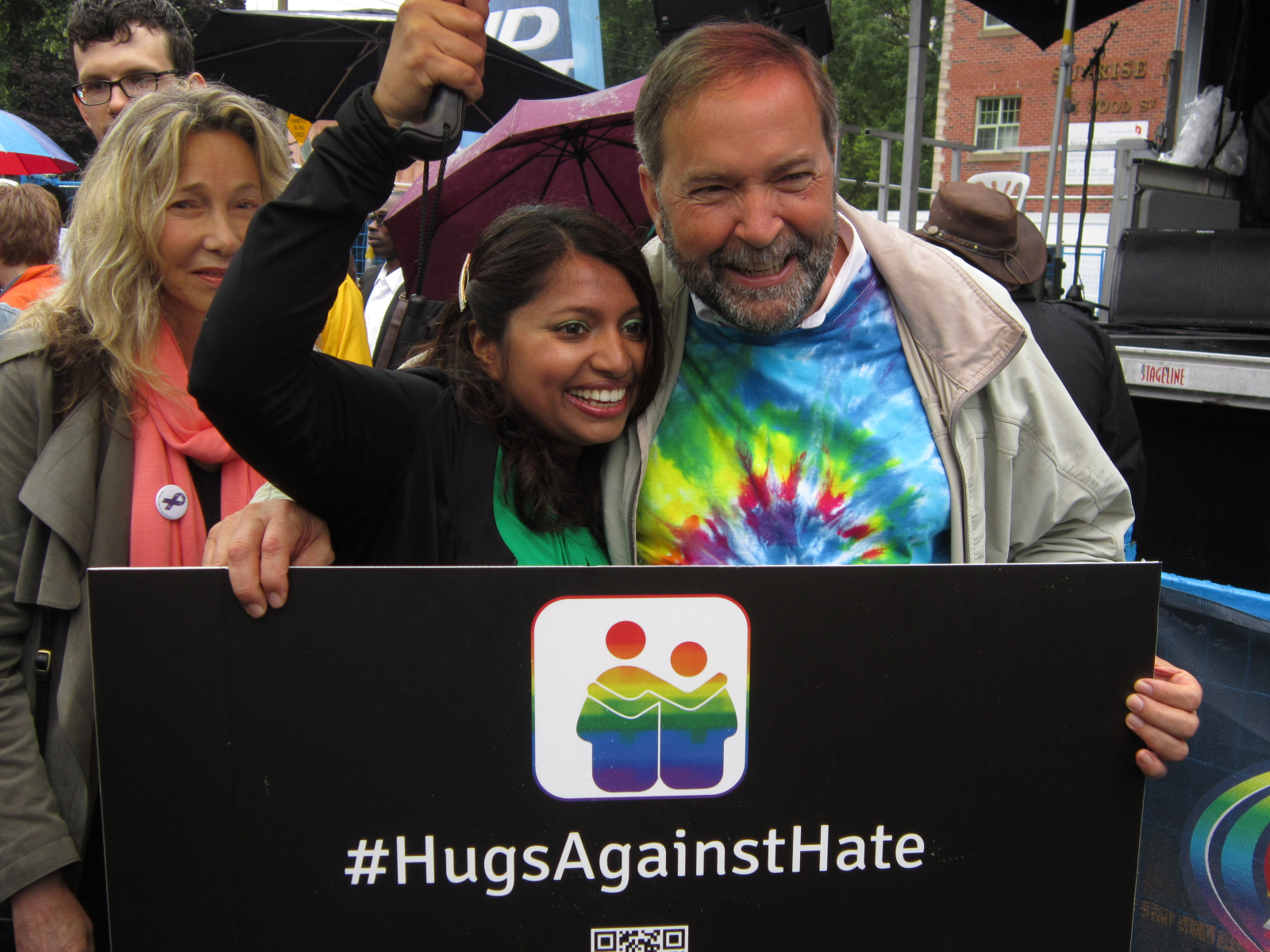 Prime Minister Stephen Harper was nowhere to be seen at Pride Toronto Festival on June 28, even as all his major political rivals flocked into town for the celebration.

“Who? We haven’t seen him," said Karen Kelly.

Even as Prime Minister Harper stayed away, federal opposition leader Tom Mulcair and a throng of NDP supporters following the party’s orange-coloured float did march in the parade, with the NDP procession attracting loud cheers from the crowd.

Mulcair was joined by Liberal leader Justin Trudeau, who went on a walkabout meeting members of the public before the main parade, as did Green Party leader Elizabeth May. 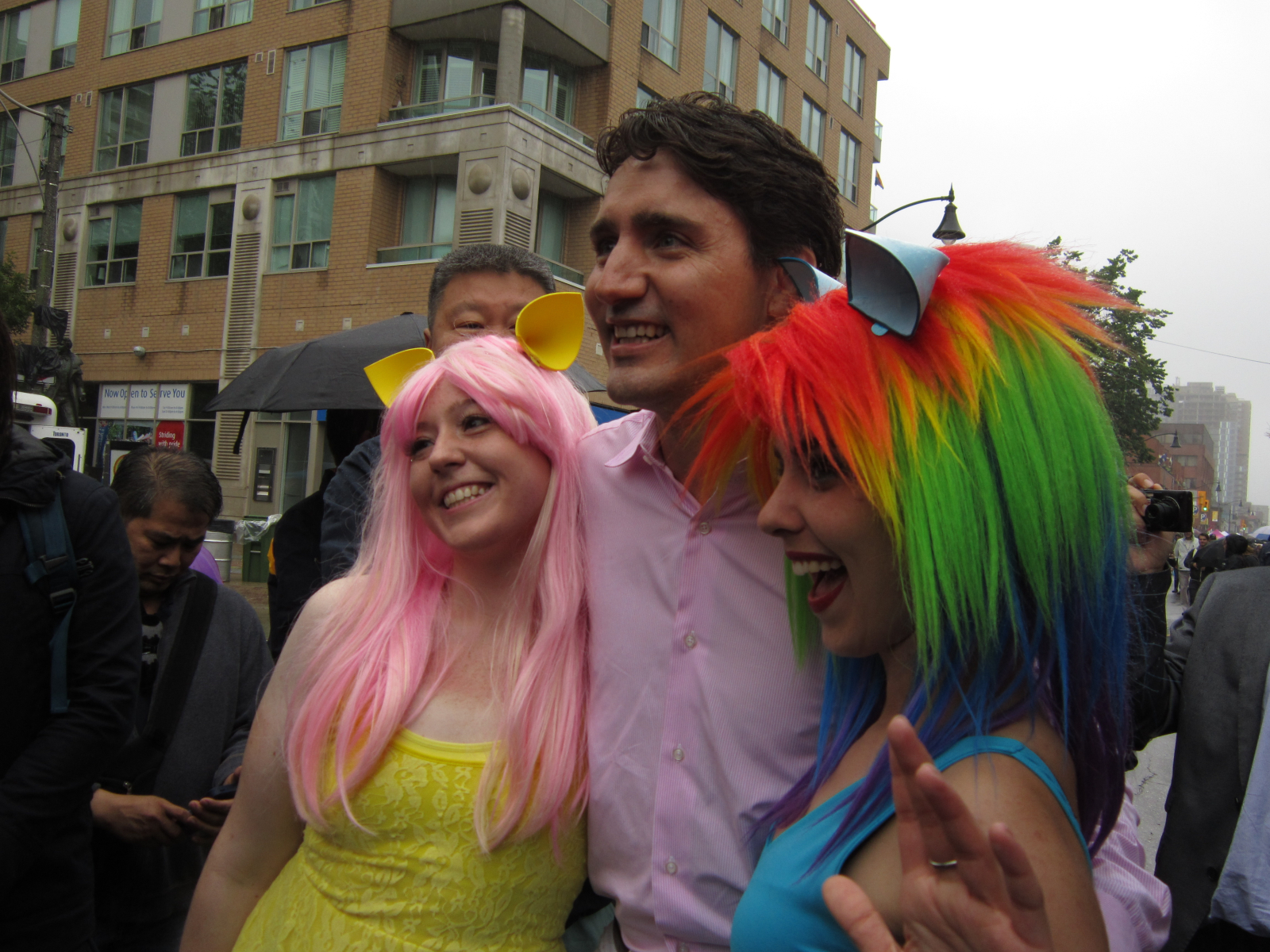 While Harper himself was absent, a contingent of federal Conservative supporters, together with marchers holding Ontario Progressive Conservative placards, did take part in Pride .

The prime minister's absence from the event appears to correspond with his criticism of gay marriage from previous years. In 2006, the Harper government put the Charter rights of gay Canadians to a free vote in Parliament, saying that civil unions would be an ideal substitute to marriage, but it was defeated.

“I have no respect for anyone who is ‘gay-negative’,” said fellow Pride attendee Gabrielle Frenkel.

The Harper government has warmed to the idea of gay rights in recent years, condemning Russian president Vladimir Putin’s law criminalizing the promotion of ‘non-traditional’ sexual relations, as well as offering protection to Iranian homosexuals and denouncing anti-gay legislation in Africa.

Harper’s recent stance on gay rights is a significant shift from when he was leader of the Canadian Alliance in 2003, when he slammed the then-Liberal government for what he said was its failure to protect the traditional definition of marriage in a speech before Parliament, cited by the Catholic Education Resource Centre. Back then, Harper argued that preserving traditional marriage between a man and a woman was a question of "democracy."

“For the Liberals or anyone in the Liberal Party to equate the traditional definition of marriage with segregation and apartheid is vile and disgusting. Our society has come, over the decades in my lifetime, to respect and recognize in law the choices of consenting adults. It is time that traditional institutions like marriage be equally recognized and respected,” said Harper in his address to Parliament.

“The Liberal position is also very dangerous; because no matter what they say today, the kind of mentality that would have traditional marriage declared illegal and unconstitutional will inevitably endanger actual rights that are indeed enshrined in our constitution not merely read-in such as freedom of religion. The Liberals say today that they will not touch the ability of churches, temples, mosques and synagogues to determine their own definition of marriage. But I remind you that these are the same people who said, in the last election, that they would never consider touching the definition of marriage itself.”

Citing previous Supreme Court decisions in favour of heterosexual marriage, Harper called on conservative-minded Liberals to support a push to defend the traditional definition of marriage.

“We are a conservative party. We support traditional marriage. We voted for it. We believed in it. We ran on it and we meant it,” Harper argued at the time.

In 2003, same-sex marriage was legalized in Ontario, just two years before it became law nationwide.

On June 26 this year, the USA also legalized same-sex marriage across all 50 states when the Supreme Court ruled 5-4 in favour of striking down state bans. The move is facing opposition from a number of southern states who aim to circumvent the ruling by using bureaucratic delays and citing religious grounds.