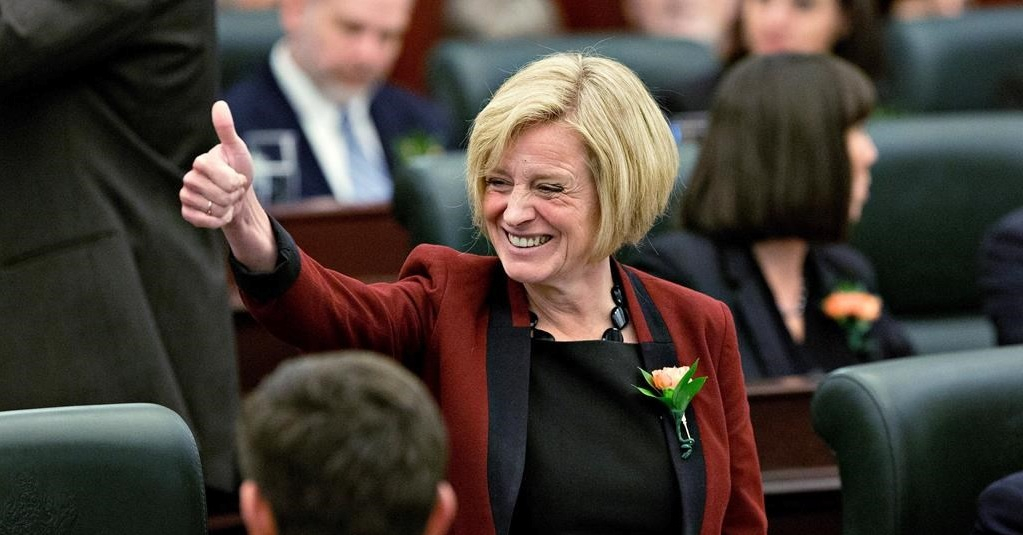 This story was republished with permission from the Council of Canadians.

The NDP government in Alberta appears to be supporting both the TransCanada Energy East and Kinder Morgan Trans Mountain pipelines.

The Calgary Herald reports that:

"Premier Rachel Notley’s party, elected last month, has taken a much more skeptical stance toward pipelines than the previous Tory government, dropping the province’s lobbying efforts for the controversial Keystone XL and Northern Gateway lines. However, the rookie government has given its seal of approval to TransCanada Corp.’s $12-billion Energy East project... In question period [on June 23], Notley said she had spoken earlier this week to [New Brunswick premier Brian] Gallant about the two provinces’ 'common interest' around Energy East."

Couillard recently commented that he doesn't see much economic benefit for Quebec from Energy East if the province was simply a "transit place" for the tar sands crude.

But McCuaig-Boyd says: "He’s just trying to make sure the project is right for his province and I think any premier would want that. There’s a shared priority certainly among all the provinces to move our resources, so I don’t think talks are dead by any means."

And the Globe and Mail reports that "[Notley supports] at least one pipeline project to transport Alberta’s oil to British Columbia’s coast. Ms. Notley and B.C.’s Ms. Clark will be meeting for the first time in person at the premiers’ conference [in St. John's] next month. The two haven’t spoken since a congratulatory phone call following the Alberta election. Ms. Notley says she intends to sit down with Ms. Clark over a glass of merlot and discuss the Kinder Morgan pipeline project from Alberta to B.C.’s Lower Mainland. 'I’d like to know the state of play with Kinder Morgan; I think there might be some potential there,' she said."

Premiers Notley, Gallant and Clark will be discussing their 'common interest' in the Energy East and Trans Mountain pipelines when they meet to review a Canadian energy strategy this summer.

The Council of the Federation meeting will take place July 15-17 in St. John's, Newfoundland and Labrador. The Globe and Mail notes that "[Notley] says she has three goals going into the meeting: Address environmental critics of Alberta’s energy industry; discuss ways to get oil to foreign markets; and persuade other leaders to push for more upgrading of Canadian oil in their provinces."

McCuaig-Boyd will also be meeting with provincial energy ministers at the same time in Halifax.

Council of Canadians chairperson Maude Barlow says, "We need a Canadian energy strategy which features meaningful regulatory limits on greenhouse gas emissions, a just transition to conservation, energy efficiency and the rapid expansion of public and community-owned renewable energy. Intimately linked to these efforts is our call to oppose the 'free trade' agenda of NAFTA, CETA and the WTO given they undermine the ability of all levels of governments to regulate the sale or extraction of fossil fuels and promote renewable energy."

At this point, it does not appear that Notley or any of the other premiers will be advancing this vision for an energy strategy.

Just days ago, the Globe and Mail also reported:

"Notley says that a new Alberta will be ready to emerge at the next global climate conference in November [the United Nations COP 21 climate summit in Paris], with a modern carbon strategy and a review of energy royalties that should be nearly finished... Before [a provincial climate change] strategy is drafted, Ms. Notley’s team is 'working frantically' on new rules to replace Alberta’s eight-year-old carbon levy on industrial polluters [by the end of this month]."

While a provincial climate change strategy sounds hopeful, the Council of Canadians argues that the imperative of climate justice cannot be achieved if Notley's government backs the Energy East pipeline (which would be responsible for about 32 million tonnes of greenhouse gas emissions a year) and the Trans Mountain pipeline (at about 270 million tonnes of greenhouse gas emissions over 35 years). Pipelines are essential to the projected expansion of the tar sands.

Prior to Notley's election, the Globe and Mail reported that "Fuelled by [tar] sands growth, Alberta’s emissions are projected to increase by 40 per cent between 2005 and 2030."

Climate change may already be impacting Alberta. The province has just experienced one of its warmest and driest winters and is now facing having areas of extreme dryness or drought this summer. This has been described as a "weather whiplash" following the extreme flooding that Alberta experienced in 2013.

The Council of Canadians believes that a key goal of COP 21 should be to achieve a legally-binding climate accord that would limit the global temperature increase to 2° Celsius above the pre-industrial level. It should also include provisions to ensure that the investor-state dispute settlement provision in so-called 'free trade' agreements cannot be used to stop measures that would ban fracking, impose water-taking restrictions on the Alberta tar sands, implement a moratorium on oil drilling in the North Sea, or local content rules for green energy projects.

The pledges made by countries so far would mean a global temperature rise of 3.6 degrees Celsius by 2100.