Bill McKibben: "Canada is an obstructive and dangerous force upon the planet" 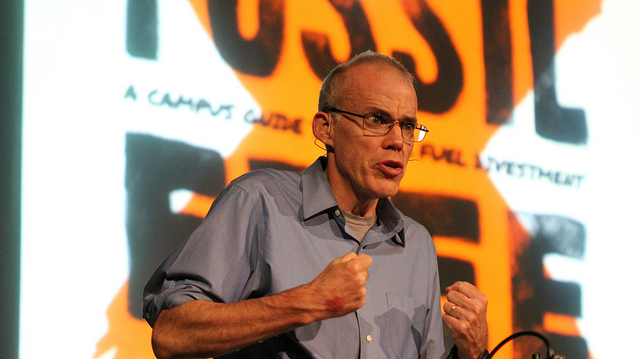 Thanks to the Conservative government’s blatant indifference to the environment, Canada is no longer is seen as a good global citizen, according to leading American journalist and activist, Bill McKibben.

The legacy of Stephen Harper’s government is a disregard for the environment, McKibben said in conversation with the National Observer in late June.

“People in the world are used to thinking of Canada as a force for good in the world. It takes a strange new calibration of peoples’ mental geography to understand for the moment Canada is an obstructive and dangerous force upon the planet.”

McKibben, who 27 years ago wrote the first book for a general audience about global warming entitled The End of Nature, spoke to the National Observer ahead of a planned march on July 5th in Toronto that 350.0rg is organizing and which the author will attend.

Generally, the former staff writer for The New Yorker had less than complimentary things to say about Canada, largely because of the Alberta tar sands. He said the country’s insistence on making the tar sands the centrepiece of its economy has meant Canada has failed to reach its international targets and obligations around climate change.

“It’s become a disruptive force in international negotiations. It’s abnegated treaties. It’s made it very difficult for people to progress.”

Coming from anyone else, such criticism might be easy to dismiss, but McKibben is far from a light-weight. He still writes for such publications as Rolling Stone and National Geographic, and in 2013 won the Gandhi Prize and the Thomas Merton Prize.

In addition to his 18 degrees from universities and colleges, McKibben landed on Foreign Policy’s first list of the world’s most 100 global thinkers, while the Boston Globe has called him “probably America’s most important environmentalist."

McKibben is the co-founder and senior advisor to 350.Org, which he describes as the first, big global grassroots climate campaign.

Since its founding in 2008 by McKibben and seven other graduates of Middlebury College, in Vermont, the group has organized some 20,000 demonstrations in every country on earth, except for North Korea.

350.Org also helped launch the fight against the proposed Keystone XL Pipeline as well as the fossil fuel divestment movement, which continues to spread rapidly.

The July 5th March for Jobs, Justice and the Climate (http://jobsjusticeclimate.ca/) marks 350.Org’s latest demonstration. The organization expects thousands to join them in Toronto and includes a lengthy list of partner groups such as Leadnow.ca, the David Suzuki Foundation, Greenpeace and others.

The march calls for a justice-based transition to a clean economy in Canada and is timed to take place on the eve of the Climate Summit of the Americas and the Pan American Economic Summit.

A number of high profile Canadians and others will march, including Naomi Klein, David Suzuki, Stephen Lewis, Maude Barlow and McKibben.

McKibben said he’s looking forward to arriving in Toronto for a couple of reasons. Firstly, the 54-year-old describes Canada as important – if not for the right reasons.

McKibben reiterates that the country has been an obstacle to international climate concerns for the last few years. “That needs to change if the world is going to get anywhere.”

The second reason is more personal. As it turns out, McKibben lived in the city in the late 1960s. For five years, he attended Northlea Elementary and Middle School in the Leaside neighborhood, where he was one year behind another student, a future prime minister of Canada named Stephen Harper.

During that period, McKibben’s father was the Canadian correspondent for the magazine, Businessweek, which is what brought him to live in the Big Smoke.

McKibben first became interested in climate change while working as a journalist. He wondered how global warming would play out politically and economically and was fascinated with both its philosophical and practical implications. “I recognized that it was a huge story.”

Since then, the subject has dominated his writing and his life. His most recent book, Oil and Honey: The Education of an Unlikely Activist, recounts his experience being jailed with other climate change activists. They were protesting the proposed Keystone XL Pipeline in what McKibben said was the biggest act of civil disobedience in the U.S. in years.

Today, McKibben asserts that it’s more important than ever that the world divest itself of fossil fuels. Since he wrote his first book on the subject, the pace of climate change has only accelerated. “The best science makes it clear that we can’t stop global warming,” McKibben said. “It’s too late for that. We may be able to keep it from getting entirely out of control.”

Even if the global population did everything right, the planet will still warm almost two degrees, according to McKibben. However, he maintains that the Earth is on a trajectory for an increase of four – even five – degrees in temperature if things continue along the lines of business-as-usual.

“Two degrees is going to be very difficult to deal with, make no mistake. We’re raised the temperature one degree already. The ocean is 30 per cent more acidic. We’re seeing huge increases in drought and floods. None of this is good news,” McKibben said.

“There’s no easy happy way out of this. But there’s worse and then there’s much worse than that.”

McKibben agrees that the 80 per cent of the reserves of coal, oil and gas need to be left untouched if the planet is to help fend off climate change.

At the same time, he believes a future where renewable energy provides the power is becoming easier to imagine all the time. He notes the price of a solar panel has dropped 75 per cent and wind energy is becoming “incredibly competitive. Those are big signs.”

It comes as no surprise that one of McKibben’s most recent stories is a lengthy piece for The New Yorker titled Solar Power for Everyone.

“Most people I know, when they turn on the light switch, they’d be just as happy if the power came from renewable sources,” McKibben said. “The people who aren’t happy with that are the people who own oil wells – like the Koch Brothers, who are the biggest investors in Alberta’s tar sands.”

The Koch’s have pledged to spend hundreds of millions backing their chosen candidates in the U.S. presidential election. That kind of backing makes switching to renewables difficult, McKibben allows. “I don’t know if we’re going to be able to,’ he said.

“It’s a tough fight against the richest industry on Earth. We need a movement of people to turn it around. Hopefully, we’ll get one. That’s what the Toronto stuff is about.”