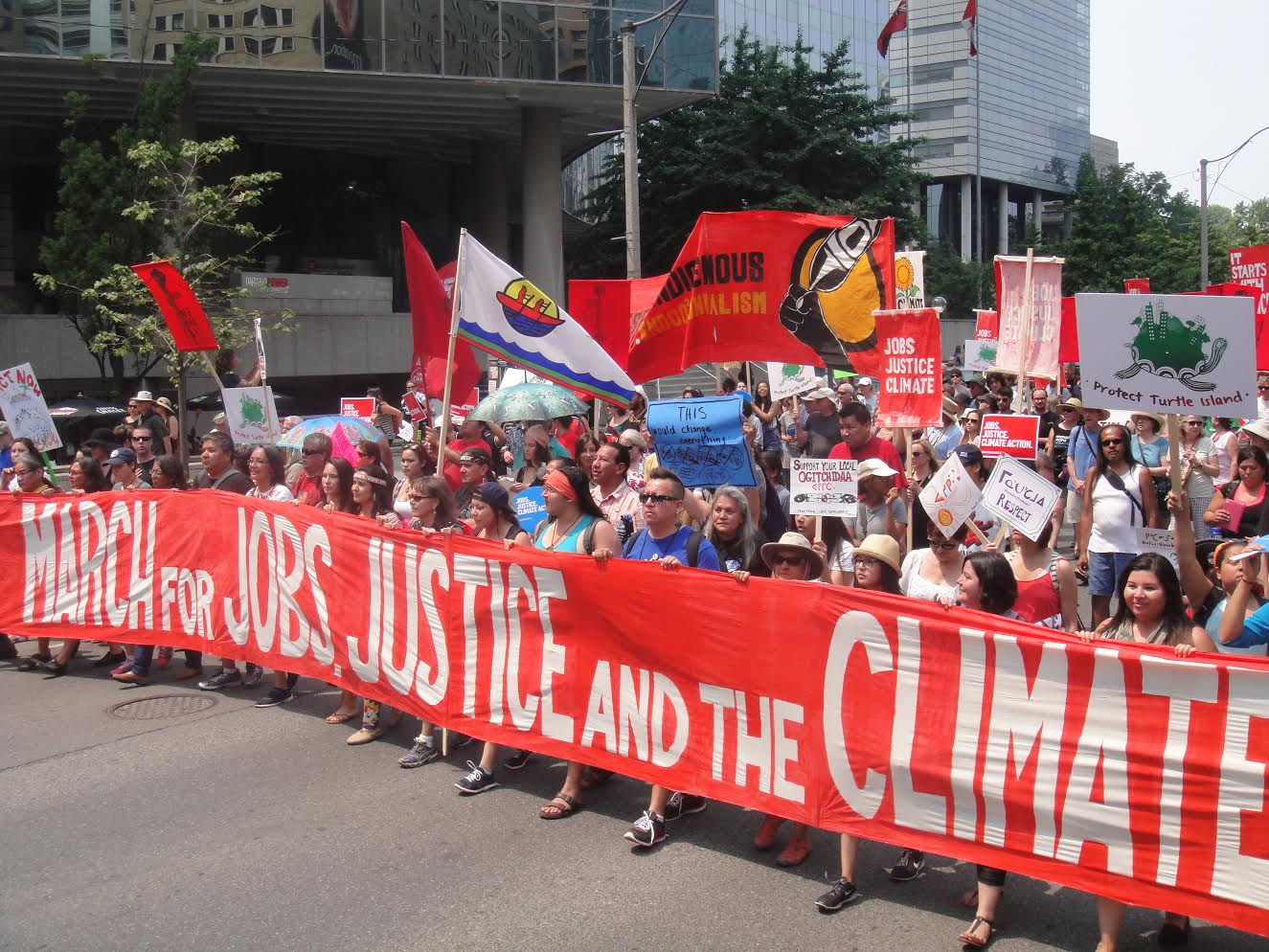 A leading US environmentalist decried the Harper government’s ‘Reaganesque’ approach to fossil fuel development as more than 10,000 people crowded the streets of Toronto to demand action on climate change on July 5. The March for Jobs, Justice, and the Climate was organized by 350.org.

“From an American point of view [Canadians] went very Reagan on us, very George W. Bush, every man for himself, which is sad to see. I grew up as a boy in Canada and it was always the sense of a strong working society where people looked out for each other,” said 350 co-founder Bill McKibben, who attended elementary school in Canada.

Said author Naomi Klein, a 350.org board member who attended the march: “I think the urgency of the climate crisis is something that more and more people are feeling because it affects their lives directly— they’re dealing with the impact of forest fires, flooding, record heat waves, droughts. They know something very, very, weird is going on and they’re also seeing leadership from places like the Vatican and they’re going, ‘Well why aren’t our political leaders acting?’”

McKibben welcomed the emergence of a broad-based climate movement, which now includes labour and human rights activists, joining First Nations campaigners whom he said had been struggling alone until about two years ago.

He said he missed the constructive role that Canada once played in tackling environmental issues, likening its efforts to that of the Scandinavian countries in the pre-Harper era.

The Montreal Protocol to reduce the production and consumption of products that harm the Earth’s ozone layer, signed in 1987, is just one example of Canada’s environmental role before Stephen Harper took power.

“Canada is pretty crucial in the climate fight," said McKibben. "Even if every Canadian rode a bicycle everywhere they went, there are not enough Canadians to prevent their climate from being destroyed, to save it by [themselves], but if Canada pumps up all the oil in the tar sands and it gets burned, then that’s enough to destroy the climate, so Canada plays a key role politically in making sure this planet stays habitable."

He condemned the Harper government’s gutting of environmental regulations and deep cuts made to government funding science research that held up oil sands developments, saying that it would take a long time to fix.

However, climate campaigners are running out of time to deal with a brewing worldwide emergency, its most recent casualties being more 1,200 people killed by a heatwave scorching Pakistan.

In Klein’s view, pre-election pledges by federal opposition parties to slash funding for oil sands and redirecting federal subsidies towards renewable energy were not enough, saying that polluting industries had to be taxed in order to effectively tackle climate change.

“We need to be taxing those parts of our economy that are doing the most harm, like financial speculation and extraction, but obviously stopping paying the polluters is the first step towards actually getting the polluters to pay for this crisis that they created,” said Klein, who is also a 350.org board member.

Nonetheless, her idea is already gaining traction in some political circles, as the NDP is promising to make polluting industries pay for the environmental damage they cause, alongside pledging fresh investments in renewable energy, more energy-efficient technologies for industry, and improved public transit to wean people off cars.

Such measures would be a critical first step in tackling climate change before rising temperatures and extreme weather spin out of control.

“This is a global issue," said actress Jane Fonda, who attended the march with her teenage grandson. "Tar sands oil, fracking, tankers taking very dangerous gas from the tar sands or from the Arctic down the British Columbia coast to the United States. It affects all of us and we have to stop it whether it’s here or across the border or in South America.”

“Maybe he’ll wake up one day and have an epiphany and say, ‘You know, the tar sands are really a bad idea.'"

At the G7 summit in Germany last month, Harper committed to ending all production and use of carbon-based energy by 2200, but his pledge was far too late for Melina Laboucan-Massimo.

As a child, she recalled climbing into a horse-drawn wagon with her grandparents to explore the vast forests and waterways covering northern Alberta, the homeland of her Lubicon Cree nation.

Today, visiting home brings tears to her eyes, as she sees a once-pristine landscape laid waste by oil sands extraction, its gouged and treeless moonscapes the most visible scars of a climate crisis that is already wreaking global havoc.

It was this pain that brought the Greenpeace activist and 350.org board member to Toronto, where she led the march together with her fellow First Nations members.

“There’s so many things to say to Stephen Harper," said Laboucan-Massimo. "I would say think about your children. Think about your future generations. Think about the very air that you breathe, the very water that you drink, that it’s not going to be there in the future— and if you continue to push a pro-tar sands, pro-fracking agenda, the very life that you knew your children won’t know and your grandchildren won’t know because the life that sustained you, the Earth that sustained you, will not be the same.”

She wanted a new federal government to implement renewable energy policies across Canada, a call echoed not only by the NDP but also organized labour.

Time for a change

“We think that it’s time that we transition off this carbon-based fossil fuel economy and it’s time to change the fossilized government that we’ve got,” said Sid Ryan, president of the Ontario Federation of Labour.

He wanted a new federal government after the Oct. 19 election to introduce a carbon tax to start weaning people off fossil fuel use, as well as developing new sources of wind, solar, and thermal power, saying that Canada needed to emulate the examples of Germany and Denmark, who employed hundreds thousands of people in building and maintain wind turbines.

“Those industries are good-paying jobs. The maintenance of those wind turbines will have to be done here, they can’t be shipped off to China,” said Ryan.

According to Ryan, each wind tower is produced using 2,000 moving parts and 200 tons of steel at their base, requiring skilled technicians to maintain the equipment once it is up and running.

“Once you start to mass-produce the wind turbines and solar panels, and the same thing with thermal power, once you start mechanizing that in a way, it becomes a lot cheaper,” said Ryan.

He said that the March for Jobs, Justice, and Climate also marked the first time that organized labour was joining forces with environmental campaigners, First Nations communities, and the anti-poverty movement— all towards building a broad-based coalition to fight climate change and create new jobs for Canadians in a more equal society.

He said that electricity was cheap until the 1980s, allowing Ontario to emerge as a booming auto manufacturing hub where workers could easily find well-paying jobs, until it was privatized and prices rose.

As electricity costs skyrocketed, manufacturers outsourced production to cheaper locales such as Mexico or China, but mass-produced renewable energy could reverse a trend that has ruined the fortunes of many Ontarians.

Nonetheless, Ryan and his 350.org allies have a hard slog before a greener Canada is born, with David Suzuki decrying the current state of the nation as “terrible,” after nearly 10 years of Stephen Harper.

“I lived in the United States for eight years and I deliberately came back to Canada for a lot of the things that I’m seeing destroyed now by the current government,” said Suzuki.

He said that the recently-passed Bill C-51 was the most odious legacy of Harper’s government, saying that it would classify him as a traitor simply for his anti-petroleum viewpoints, marking him as an enemy of the economy.

“C-51 is going to put me in a category of being a traitor or an enemy of Canada,” said Suzuki.