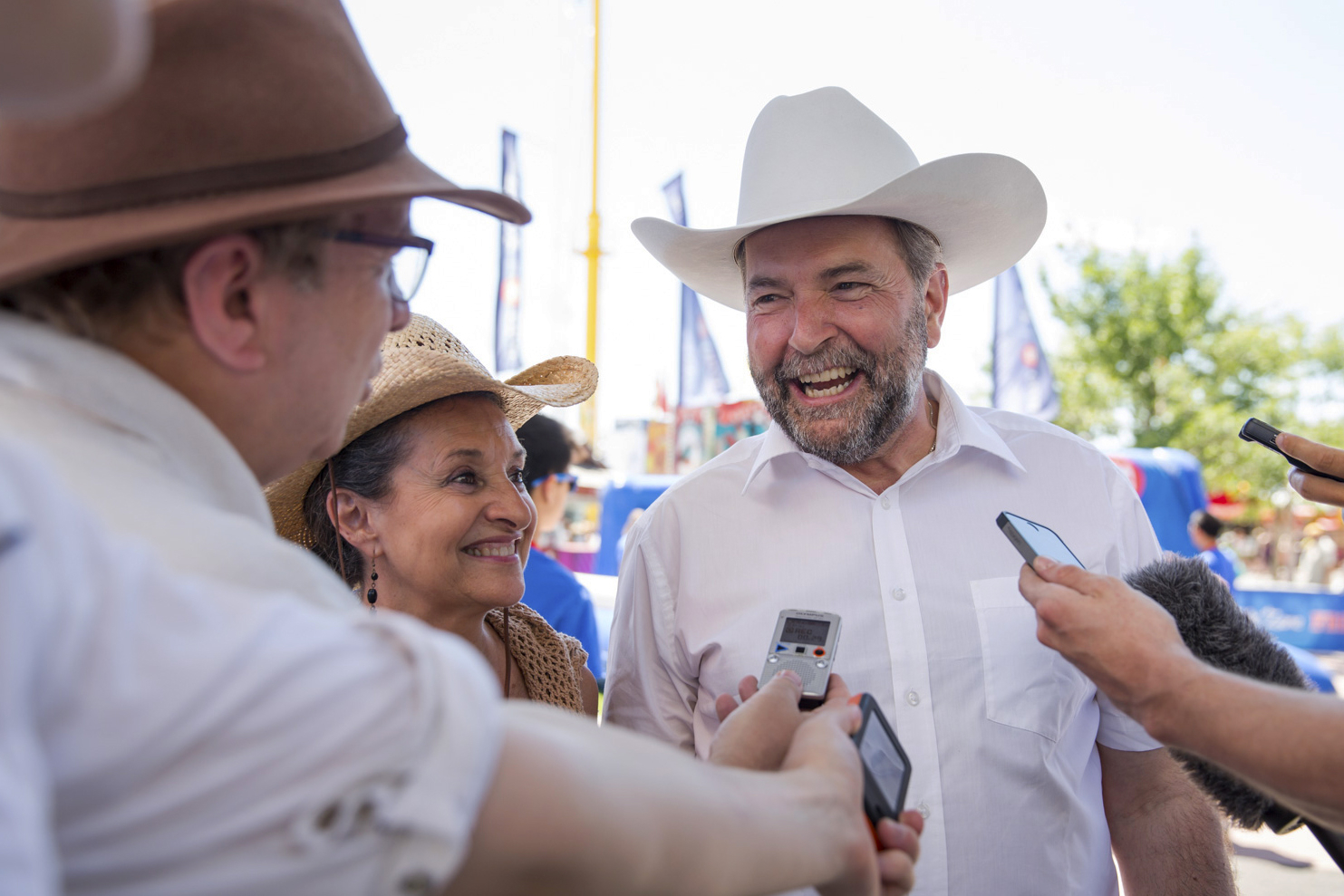 Two national public opinion polls released Wednesday show the federal election has become a tight horse race, with the federal New Democratic Party so far leading slightly, and most seen as the agent of change against Stephen Harper.

Abacus Data polling shows the NDP with 32 per cent of national support, Conservatives at 29 per cent, and the Liberals at 27 per cent. A further 77 per cent say they would like to "see a change."

A Nanos Research poll also showed 52 percent see Thomas Mulcair representing the clearest change from the current Stephen Harper government. The NDP was also seen as having the "most appealing platform" —though just narrowly so.

Public opinion researcher Nik Nanos calls it the first truly three-way election race in generations, and one being fought by three very different federal leaders —Harper the “realist," Mulcair the “populist," and the Trudeau the “celebrity,” he said.

“In this particular election race, leadership and personality is going to mean a lot, because we have three very different personalities,” said Nanos on Wednesday.

Nanos explains Mulcair’s rise this year as one based on his effectiveness as Opposition Leader, and his clarity in opposing the Bill C-51 terrorism law and Harper's proposed troop deployments in Iraq. Helping Mulcair too, said Nanos, has been the less than clear “nuanced” positions of Trudeau on those same issues.

“So the NDP has benefited by portraying themselves as a clear alternative to Stephen Harper,” said Nanos.

Vancouver pollster Mario Canseco of Insights West calls the NDP’s rise this year unprecedented, especially this early in the campaign. Former leader Jack Layton had a late-election orange surge following his performance in the TV debate, but Muclair’s gains now are three months ahead of election night.

“Now you have more time to think of Thomas Mulcair as the next Prime Minister, whereas the case with Jack Layton in 2011, all you had a was a week and a half.”

“We’re having this conversation about a victory for the opposition at a much earlier moment than we’ve had with any of the elections that Harper has fought,” said Canseco on Tuesday.

Nanos points out the Conservatives’ drop in the polls does not mean they will lose the election, but a majority government would be out of the question if the Oct. 19 election were held today, he said. A hung minority parliament is much more likely, he added.

A recent National Observer analysis, “How Harper will win the election,” explained the Conservative’s micro-targeting strategy of pinpointing seniors, working-class suburbanites and families.

Jewish and Ukrainian voters in Canada were also treated to hawkish foreign policies in defence of Israel, and defiance of Russia.

However, Conservatives’ previous electoral victories showed this narrow “slice and dice” strategy still depended upon a national popular support in the high 30s, which it currently does not enjoy.

Due to the effort of key ministers such as Jason Kenney, Nanos expects the party will hold a lot of the immigrant segment, but suggests Tories may face more competition in attracting women this time.

“The soccer moms are a little more elusive. They are in suburban ridings, and tend to be very practical in terms of what governments are delivering for families, and are much more open to voting for other parties."

The new Abacus research suggests the NDP holds the most sway with females of any party — commanding 32 per cent support, versus 28 per cent for Liberals, and just 26 per cent for Conservatives. Tories are tied with the NDP among male voters, and lead among seniors.

But Mulcair may find challenges in keeping his lead. Nanos says the NDP’s support is based on a tricky coalition of urban social democrats, western populists, and Quebec sovereignists and nationalists.

“To hold on to his seats in Quebec, he has to watch out that he isn’t perceived to be appeasing nationalist-sovereigntist voters, which could repel voters in other parts of the country, like in the west,” said Nanos.

The return of Gilles Duceppe in Quebec is another risk for the federal NDP, he noted.

As for Justin Trudeau, he says, Canadians see him as a celebrity because of personal presence and his family pedigree. The Liberal leader himself was not shy about reminding people about his father, former prime minister Pierre Trudeau.

“My dad taught us Trudeau boys to paddle pretty much around the same time we knew how to walk,” he joked recently in Vancouver.

Nanos says that charisma has its limits.

“For a lot of Canadians, he’s a much more aspirational leader than we’ve seen in the past, and much more inspiring. It allows him to engage and connect with voters, but it doesn’t mean he can convert that into support.”

Economic woes on the horizon

Both Canseco and Nanos expect that Harper will use coming economic worries about a a possible recession to highlight his strength as a fiscal manager in tough times. A September economic update by Finance Minister Joe Oliver is expected to bring more attention to this, just before the election.

However, Canseco says the experience of the Alberta NDP shows that even when that province’s economy cratered following an oil price dip, people were prepared to be less ideological than in the past.

“There’s a certain confidence among Conservatives that even if things go wrong... people will go with the person they know.”

“It’s similar to the campaign that we saw in Alberta. There was a sense that, 'Well tough times are coming, we’re better off sticking with the party we know and trust.'"

“People said there’s no way that voters of this province will go from blue to orange. Well guess what? They did,” said Canseco.

The Abacus polling shows New Democrats now lead in Quebec, and are virtually tied in Ontario. Conservatives lead in the prairies and rural Canada. And Liberals lead in Atlantic Canada.

Both Nanos and Canseco say the vote-rich Toronto and its outlying "905" areas could swing this election, as may British Columbia where a tight race includes growing support for the Greens.

New electoral boundary changes increased the number of federal seats from 308 to 338, which makes cities into more important battlegrounds. Nanos says "conventional wisdom" has been that Conservatives will benefit from that switch. But the changes mean brand new ridings have no new incumbents, so the advantage is less clear for any one party, he said.

The Abacus research polled 2,000 Canadians July 3 to 6, and is considered accurate +/- 2.2 percentage points.