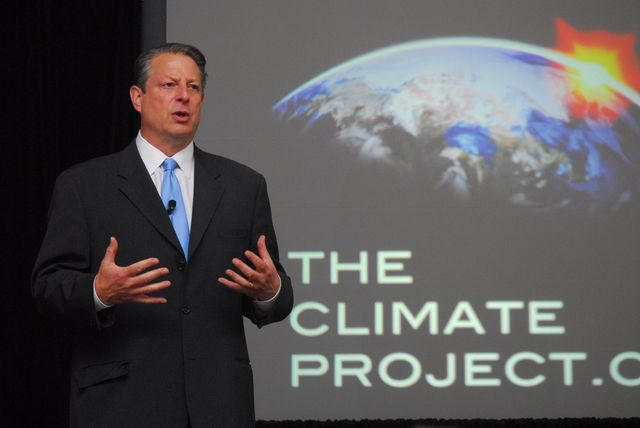 Young delegates welcomed Al Gore’s leadership on climate change as a breath of fresh air even as Stephen Harper’s government skipped the Climate Summit of the Americas in Toronto on July 7-9.

After delivering his keynote speech at the summit downtown, the former US vice-president addressed delegates at the Climate Reality Corps training session in Mississauga on July 9-10. He warned that climate change could trigger a sixth great extinction if left unchecked, but ended his speech on an upbeat note by outlining achievements from solar panels powering African mud huts to clean-tech jobs powering British Columbia’s economy.

One young person speaking up was Corrina Serda, a presenter and mentor who has been involved in environmental action since her childhood and has now given more than 180 presentations of her own on climate change.

“I think the one key message from his speech, at least in my opinion, is that we still have hope that renewable energy is going to be really great for our future and that we all have the opportunity to turn this around and that is a real tangible goal for us,” said Serda.

She contrasted Gore’s leadership to that of the federal government. Harper, she said, is holding the country back from what most Canadians would like to see done about greenhouse gas emissions. Ottawa must take more action on climate change, in her view.

But federal Environment Minister Leona Aglukkaq skipped the Climate Summit of the Americas, even as 22 municipalities, provinces, and regions from across North and South America signed an action statement in Toronto just five months before the COP-21 talks in Paris.

Serda also felt that Harper’s energy and climate policies are misguided, but said that Harper did not necessarily mean to do harm.

“I think honestly he is doing what he thinks is best. I just think that the way that he’s going about it is going to end up being detrimental for our planet and I think that’s unfortunate for us,” said Serda.

Canadians could override Harper’s inaction by getting involved in the political system and educating themselves about current affairs, breathing new life into often-stale elections.

“I’m of the opinion that we can reach a critical mass this year especially through all the different events that we’re having in Toronto and the area. If you look at it there’s 400 people from Canada here at the training today. All of those 400 people are from across Canada and they’ll go back to their own communities and tell people about it. If they even reach 10 other people or 100 other people, it really isn’t that hard to do. We could reach 40,000 people. It’s exponential, because you have one person who can go back and talk to so many different people,” said Serda.

Aiming for critical mass action on greenhouse gases is Audrey Depault, national manager for the Climate Reality Project, who said that 2015 is a key year for the movement especially with an upcoming federal election where the environment will likely be high on the agenda. This will be followed by the Conference of Parties (COP) 21 talks in Paris in November.

“With all of the major events that are happening, the election being one of them, right before COP-21 in Paris, this is really a turning point in the history of climate change in Canada and if we can build the public support necessary to have all parties and all levels of government to act, then we can get to a national agreement,” said Depault.

As the COP-21 talks loom, Depault wanted a national plan for developing a Canadawide green energy network, as well as developing an eco-friendly transportation sector adapted to individual municipalities.

Regarding the oil sands, Depault said that shutting them down immediately is impossible

“What I want federal politicians to do is to put together a unifying strategy and unifying climate change plan to reduce greenhouse gases at the national level, I want them to take a stronger commitment in Paris this year, and to of course have the plan that will actually allow us to achieve this,” said Depault.

Such a plan may not be forthcoming in time for Paris, even if Stephen Harper is voted out on Oct. 19, as Liberal leader Justin Trudeau indicated that, if elected, his party may not have an emissions reduction target until January next year.

However, both the Liberals and NDP have pledged greater support for renewable energy development if elected. The NDP have also promised to make polluting industries pay for the damage they cause.

“Paris is not the end of the story and we can still put together the initiatives at the local level [and] provincial level regardless of the outcome of the Paris negotiations, but I think that there is definitely enough public support. We just need to voice it,” said Depault.