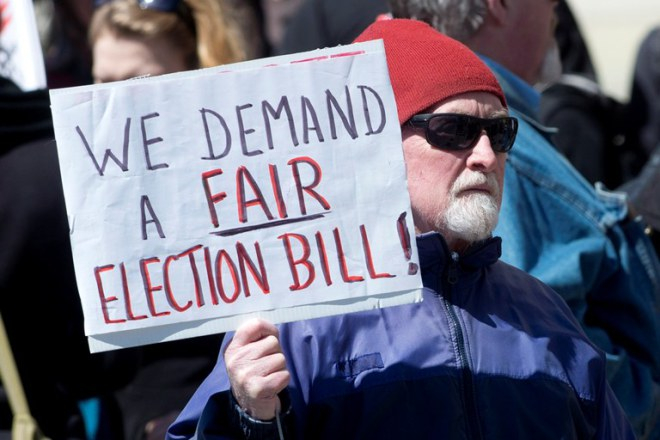 Suspending a single provision of the Conservative government's new voter law with a federal election only months away at most is just too risky, an Ontario judge ruled Friday.

In his 25-page decision, Superior Court Justice David Stinson refused to grant an injunction against the provision that strips the use of voter information cards as a form of identification.

"It is problematic to change the rules for elections at the last minute through the blunt instrument of judicial intervention," Stinson wrote.

"Late changes in election rules run the risk of unfairness or, at the very least, the perception of unfairness."

The Council of Canadians, Canadian Federation of Students, and three voters argue parts of the Fair Elections Act enacted last year are unconstitutional. They maintain that thousands of people could be disenfranchised by the new law.

However, because the case can't be resolved before the election — which must take place Oct. 17 at the latest — the applicants asked Stinson to grant an injunction against the provision related to using the voter information card as ID.

Even though the applicants have raised a serious case and some voters might suffer "irreparable harm" by not being able to exercise their right to vote, Stinson said, he couldn't grant the requested relief.

The provision at play, the justice pointed out in his decision, was only one of several in the new law.

As part of the new rules, the government stripped Canada's chief electoral officer of the right to recognize the information cards as a valid form of identification.

When the two sides presented their case to Stinson earlier this month, the government said the new rules were needed to prevent voter fraud.

But the lawyer for the applicants argued the rules would hurt the democratic system itself by undermining the right to vote for tens of thousands of Canadians — mostly students, aboriginals, seniors and the homeless.

"This case is about the right to vote — the cornerstone of democracy," lawyer Steven Shrybman told Stinson.

In the 2011 election, as many as 400,000 people used voter-information cards as official ID on election day. The cards are one of the few forms of readily available ID with an elector's address.

Government lawyer Christine Mohr told the court that ineligible voters could cast a ballot using the cards and noted 45 acceptable forms of ID are available.

The applicants maintained the fraud the government says is a problem is really a manufactured crisis.