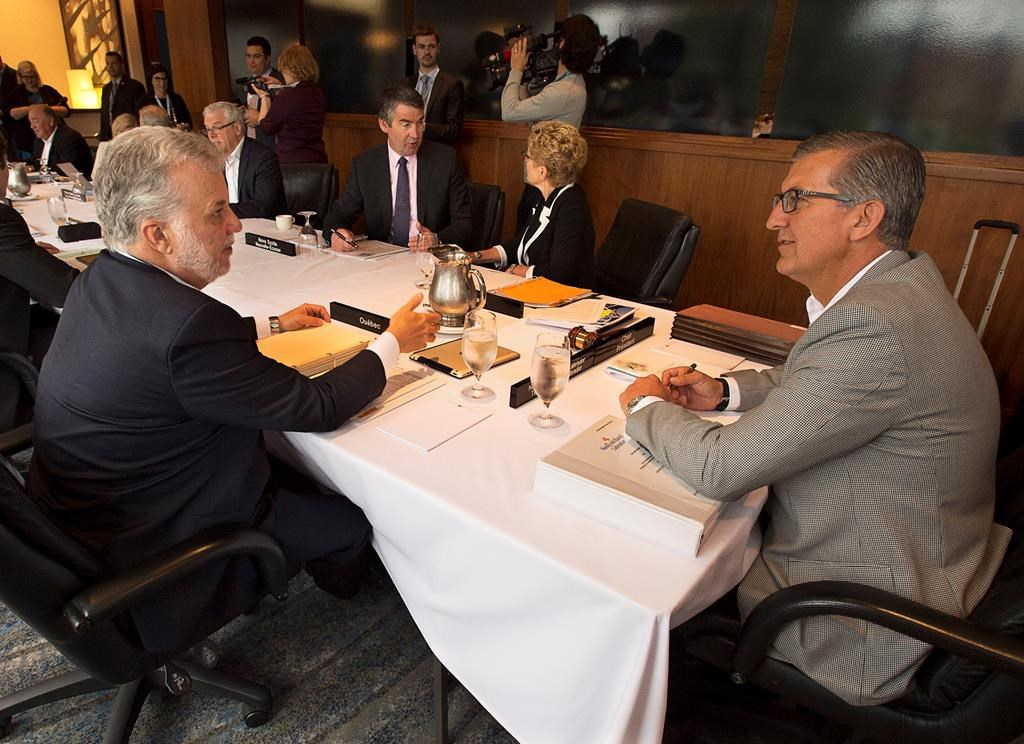 Canada’s premiers chose pipelines, jobs and the economy over climate change on Friday. At a news conference the leaders addressed questions around the Canadian Energy Strategy that was finalized at the meeting of the premiers in St. John’s, Newfoundland.

“Canadians want jobs. Canadians want economic growth,” British Columbia Premier Christy Clark said. “The only way to do that is to get yes on development of all kinds. But the only way we can get to yes and guarantee those jobs will be created is if we can assure Canadians we are doing it in an environmentally sound and responsible way.”

Most of the talk, however, revolved around jobs and development rather than reducing emissions and meeting greenhouse gas targets.

It was a meeting of strange disconnects. Alberta Premier Rachel Notley spoke about developing and transporting energy resources responsibly and safely even while Nexen struggled to contain a pipeline spill of five million litres of bitumen, produced water and sand at Long Lake, Alberta.

“Again, we had some discussions about the spill in Northern Alberta today and the premiers understand that, notwithstanding the unfortunate event we saw, that pipelines continue to be the safest way to transport non-renewable resources across this country,” Notley said.

“We need to do better to prevent future accidents like this.”

Premier Robert McLeod of the Northwest Territories spoke on the one hand of how the energy strategy would allow the province to develop its resources since it provided for pipelines. The NWT continues to look at the feasibility of an “Arctic Gateway” pipeline.

“We think the low price of oil these days gives us the opportunity to properly plan and develop those resources,” McLeod said.

In the next instance, he remarked on how his province was the hardest hit from climate change, citing a declining wildlife population and significant drops in water levels in rivers. “We have two hydro facilities that we don’t have enough water to generate hydro electricity, so we have to burn diesel,” McLeod commented.

Newfoundland and Labrador Premier Paul Davis praised the document as monumental and visionary. “This is about our economies and about provinces being able to maximize their economic benefits from the energy resources that we have in this country.”

Nor was that the only disconnect at the meeting. The new energy strategy is a conflicted mix of environmental protection strategies and energy growth initiatives.

On the one hand the strategy says it should maintain the highest degree of environmental safeguards and protection, including by addressing climate change and reducing greenhouse gas emissions globally. On the other, it talks about fostering the development of pan-Canadian, regional and bi-lateral agreements on energy development transportation and transmission.

The strategy, which has been in the works since 2007, even satisfied Saskatchewan Premier Brad Wall. Going into the meeting Wall aggressively defended the energy industry, something he continued to do at Friday’s press conference.

Wall said he was frustrated that Canada possessed resources that would be the envy of almost every other nation on the planet and that yet, lately, people didn’t even want to mention the words “oil and gas.”

Added the premier: “It employs people. It funds social programs. It pays for equalization, and it’s okay to say oil and gas is a good thing and we need to move it across the country.”

If the premiers were self-congratulatory about the document, response from the environmental community was less than enthusiastic.

The Council of Canadians called for leadership from the premiers to address the climate crisis and said the strategy falls short. “Current proposals on the table threaten to allow enough tar sands expansion to make meaningful climate pollution cuts nearly impossible,” said the Council’s energy and climate campaigner, Andrea Harden-Donahue.

The council’s national chairperson, Maude Barlow, noted the irony of Alberta experiencing one of the country’s largest pipeline spills while the strategy opened the way for tar sands pipelines such as Kinder Morgan and Energy East.

Barlow said the “bedrock of a Canadian energy strategy” should halt extreme energy expansion, better regulate the oil and gas industry, shift subsidies to climate solutions and support jobs that reduce the climate footprint. “There are plenty of ways premiers can achieve this,” she commented.

Environmental Defence called the strategy a “big step backwards,” and said the document puts Canada further out of step with the rest of the world when it comes to treating climate change seriously.

“Wildfires in British Columbia, a severe drought in California and more extreme and unpredictable weather all underscore the urgency of the climate crisis and the need for a meaningful energy strategy to tackle carbon pollution,” the group declared in a statement.

The strategy even drew criticism from the United States, where the Natural Resources Defence Council called its commitment to reducing greenhouse gas emissions “tepid.”

“Canada needs to reduce, not increase, its carbon pollution.”