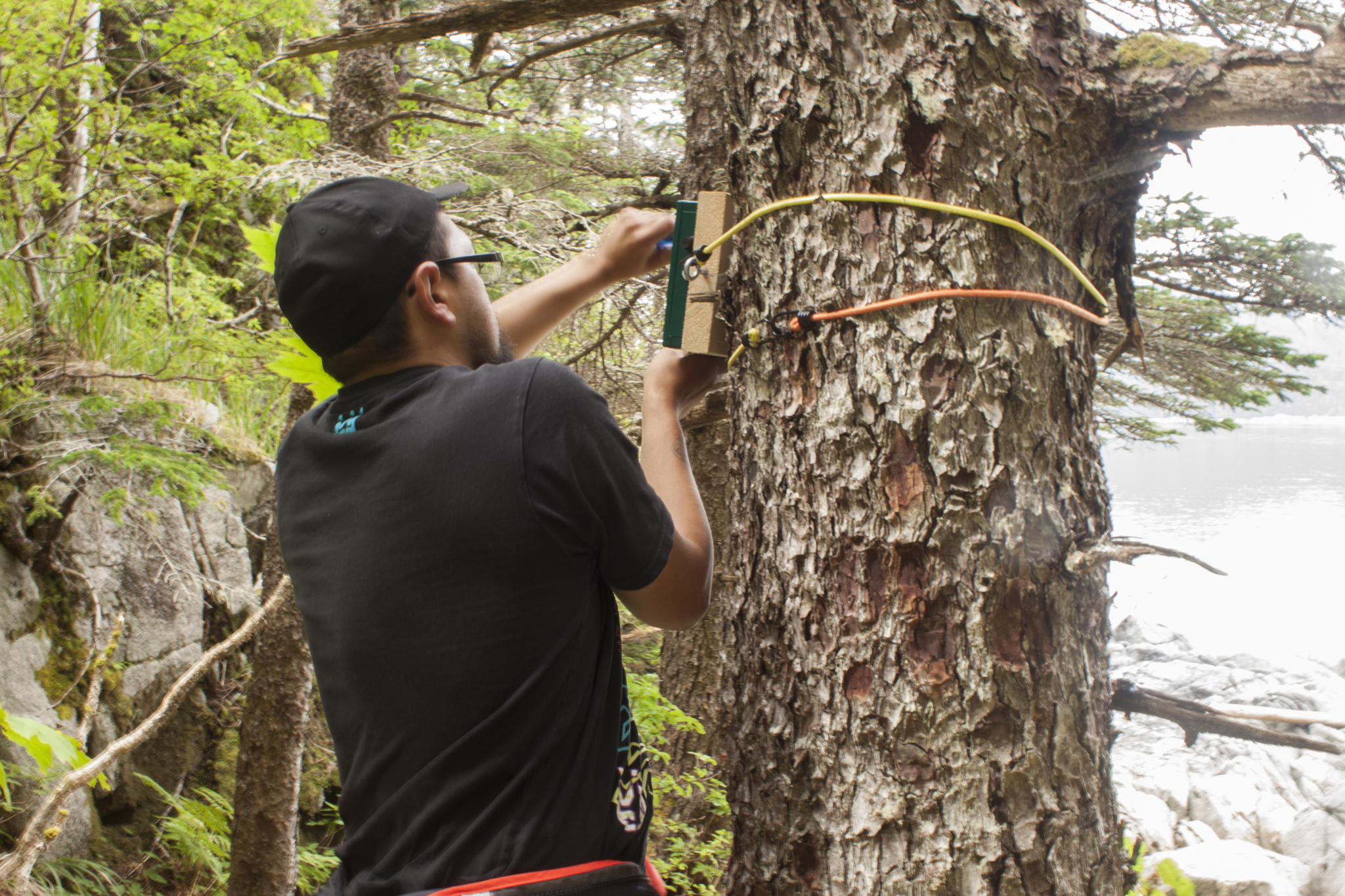 One sound the citizens of Hartley Bay aren’t keen to hear is the rumble of oil tankers making their way up the Douglas Channel.

So over the last 14 months, members of the Gitga’at Nation have paid close attention to the sounds in their territory. With the help of a geographer – Max Ritts from the University of British Columbia – the Gitga’at have acoustically mapped the region.

Charting the sounds of an area might sound arcane, but it is part of a growing science known as soundscape ecology.

“The idea was we wanted to collect patterns of activity, of ecological diversity, in the territory to better understand the acoustical ecological profile of the territory at a time when things are changing very quickly,” Ritts says.

The 'changes' on Ritt's mind are increased tanker traffic in the channel. Enbridge wants 220 tankers annually carrying diluted bitumen from Alberta's oil sands through its proposed Northern Gateway Pipeline project to traverse the narrow route. The tankers would leave from Kitimat and travel through the narrow Douglas Channel, past Hartley Bay — on their way to Asia.

Nor would Enbridge’s tankers be the only ships on the route. Vessels from future LNG projects and other industrial projects could potentially mean a major increase in traffic through the channel.

The massive tankers emit a persistent low frequency throb, which as much as any impact on animals could also take its toll on people as well. Ritts believes the sound, that would be around the clock, would bring with it a “sense of unease and anxiety.”

But as much as audio unease might unnerve the residents of the tiny British Columbia village, what they really fret over is the possibility of an oil spill and the impact to both their way of life and the area’s burgeoning wildlife.

Hartley Bay, described as the "home of the Gitga'at," is predominantly a fishing community, relying primarily on salmon, halibut and seaweed harvesting.

In addition, more and more whales keep congregating in the region, he said. The territory is now home to a large humpback population, killer whales, minke whales and, more recently, fin whales.

The audio disturbance could interfere with whale communication underwater, disrupting their ability to forage for food and even maintain coherence as a group as they move along the coast.

The acoustic maps of the area’s bio-diversity are one more way the Gitga’at can document what’s at stake should the proposal for the tankers move ahead.

“There’s a lot of future activity and just having this kind of a future document is one way of preparing for the possible changes that activity could introduce,” Ritts says.

"A lot of silence"

For the project, Ritts partnered with the students of Hartley Bay School. Together, they installed eight battery-powered recording devices known as "Song Meters" eight miles apart from each other. The Song Meters ranged from near Kitimat to Otter Channel.

The devices digitally record everything from the wind and the waves to birdsong and whale blows. “One of the most important things we found was a lot of silence, the regular activity of a northern coastline, which is to say, lots of waves, lots of wind, lots of calm periods before the day begins,” Ritts says.

By recording the existing soundscape, Ritts is able to build a profile of how the territory currently sounds. This is important, because one of the major concerns is no one knows what the real impact will be when the entire eco-system is transformed into a trans-oceanic shipping route.

Ritts and the Hartley Bay students recorded 257,327 sound files, or over 4,000 hours’ worth. They’re currently analyzing the data. They picked up sounds of birds and whales, and haven’t heard many ground animals such as bears or wolves yet. But they still have hours of files to comb through.

Soundscape ecology is on the rise, according to an article in the research journal Science. The magazine reports that scientists are collecting terabytes of information in order to fully understand the impacts of disturbances— ranging from construction projects to the arrival of invasive species.

Sound data provides a snapshot of the region

In the case of Hartley Bay, Cam Hill, the principal and a teacher at the local school, says the data provides a snapshot of what’s taking place in the region. He hopes the soundscapes will lead to a better understanding of questions such as why more whales are gathering in the area and are focused on certain waters. He also wonders about the impact of noise on the giant mammals.

“To me, those are all unknowns and for us to be able to gain an understanding of the way they interact with the environment, we need to delve into that a little bit more,” Hill says.

One of the project’s important aspects was to make it community-based. Ritts worked with some of the older kids at the 34-student school, who helped him place the Song Meters as well as maintain and gather data from them.

“That really changed the goal of the project,” Ritts notes, “because it struck me as a great way to work with the community and collaborate on something.”

Two of the students who worked on the project were cousins, Steven and Ethan Dundas. Steven, 18, says he learned how much biodiversity surrounds him and that it needs his care.

“I learned that the animals in our territory are important and it wouldn’t be good if the tankers came through. [The animals] could all be gone just like that if a crash happened.”

Ritts says working with the community was one of the best aspects of the project, as it put him in contact with what he calls an “amazing” school with dedicated teachers and students. He says they were all interested in learning more about the territory, and that they helped him learn about the region in the process.

The goal for both Ritts and the Gitga'at community now is to publish the research in a paper with contributions from the students. Ritts says publication is important because it will provide the project with legitimacy if the community needs to engage with proponents in the future.