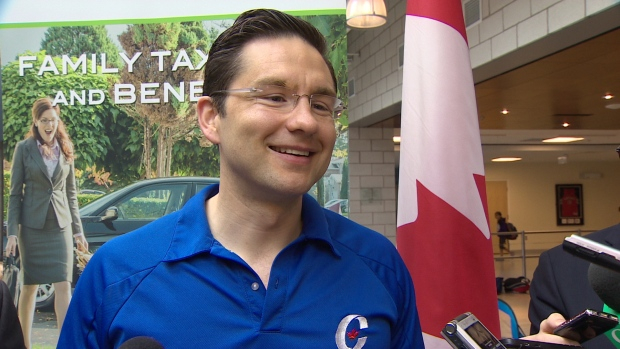 The Universal Child Care Benefit (UCCB) couldn’t be a more blatantly political ploy if the Prime Minister was driving down Main Street tossing hundred-dollar bills out of the official government limousine.

(The heavily armoured Cadillac, by the way, was recently shipped to India for $1.3 million of taxpayers’ money because Stephen Harper refused to trust Indian security forces.)

The UCCB came into effect on January 1, 2015, but the Harper government deliberately delayed payment until July in order to make the first cheque a fat one – between $400 and $500 per child. Conveniently, the Conservatives timed it just before the beginning of the federal election campaign, and well away from income tax season (when much of it will be clawed back).

Harper has sent one of his chief electioneers, Employment Minister Pierre Poilièvre, to flog the UCCB in press conferences and government meetings—clad at times in a t-shirt emblazoned with the Conservative Party logo.

Poilièvre's wardrobe choice is telling: the Conservatives are laying the UCCB in front of hesitant voters, hoping that the gift of their own tax dollars will entice grateful voters into the Party’s camp. While the partisan branding on Poilièvre’s shirt reveals the UCCB campaign to be an election-year ploy, the ads that promote it have been paid for by Canadian taxpayers.

Stephen Harper first introduced the UCCB in 2006, giving out $100 for every child under six years of age. It was essentially a no-strings handout to adults, not to children. It didn’t have to be used for daycare, despite its name; it could even be used, as one political strategist suggested, for “beer and popcorn”.

Now that payment has increased to $160 for a child under six years of age, and there is an added $60 per month for children six to 17 years of age.

While the “enriched” UCCB is intended to function as a bribe to entice voters, it’s actually a pseudo-bribe— because it’s a pittance relative to the actual cost of daycare in Canada.

Real-time daycare costs in Canada average nearly $40 per day or about $750 a month for pre-schoolers. In Toronto actual costs are more like $1300 a month; in Vancouver they average just over $1200 a month.

The new rates will therefore cover about four individual days of daycare services, or just over 20 per cent of the average monthly costs of such services – and in Toronto, barely 12 per cent.

For low-income working single mothers or families, this very modest increase in financial support won’t help them keep their jobs, which can be totally dependent on their being able to afford child care.

You won’t get to keep the money

The UCCB is also only a pseudo-bribe because it comes out of taxpayers’ pockets from payments collected in past years, and then, because it’s taxable – both federally and provincially – many of the dollars paid out under the program will be cleverly retrieved from Canadian voters’ pockets after the election is over, come income tax time.

That means you get dollars today, but you give a lot of them back when you pay income tax next year.

As the CRA website states: “The universal child care benefit (UCCB) is a taxable benefit. If you, or your spouse or common-law partner, receive the UCCB, you must report it on Line 117 of your income tax and benefit return.”

In addition, the UCCB replaces the previous child tax credit, which gave parents about $338 per year per child.

Income tax will take a big chunk at the payments under the program, so that on average parents will only keep one-third of the UCCB, and for some, as little as one-quarter of their new payments.

All told, the $60 benefit will amount to $14-19 per month for most families – or about enough to buy one medium-size pizza every 30 days.

As accountant Mitch Kujavsky of the website The Funny Accountant put it in a CBC interview:

“It’s a loan from your very nice Canadian government, for nine months, and you’re going to have to pay that back – at least half of that loan – in April.”

What the Universal Child Care Benefit really is

The UCCB is essentially a mirage, part of a slick advertising campaign for the Tories’ “Economic Action Plan,” which began last November with TV ads for various financial perks. The perks were billed as coming from the Government of Canada and “subject to parliamentary approval.”

Parliament was not in fact consulted, and the ads came straight out of Conservative political strategy. A more accurate disclaimer, according to the National Post, would have been:

“This message is for the benefit of the Conservative Party of Canada; paid for by the taxpayer; and, we don’t give a flying fuddle-duddle what parliament thinks about it.”

The UCCB will benefit primarily families where the father earns large amounts of money, in which the mother can afford to stay at home with her children. This demographic forms a substantial part of the “1 per cent” — a core segment of the Conservative base.

It will do next to nothing, in real terms, to help single mothers or low income families — those who really need it — and may boost some families into a higher income tax bracket, resulting in a net loss of income.

Another ethical U-turn by Harper

Eleven years ago, Leader of the Opposition Stephen Harper complained that the Liberal Party was promoting a program that “just happens to be the same as the government’s own election platform” and criticized the Liberals for their “culture of secrecy” around how they paid for advertising.

Now he’s shown his cynical intent to out-do the Liberals – and all his other political forebears – with the most brazen, ethically-challenged behaviour exhibited by a Canadian politician in living memory.