Clark and Harper know forest fires linked to climate change. Why won't they do anything about it? 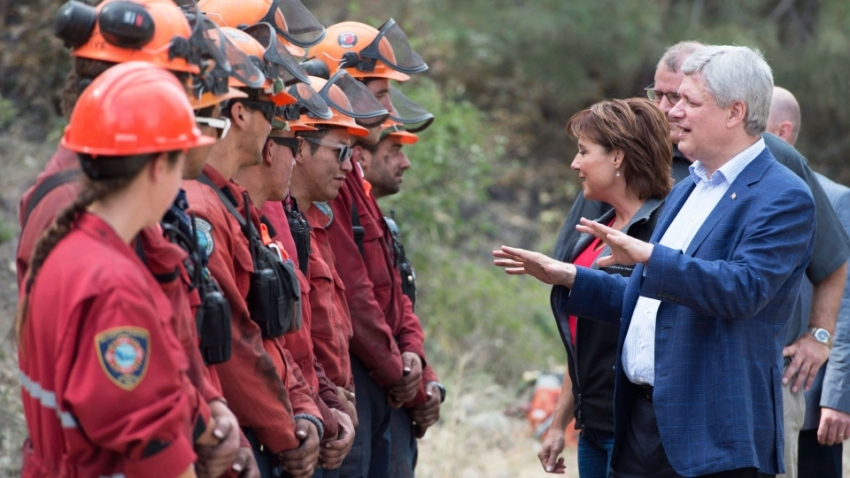 B.C. Premier Christy Clark and Prime Minister Stephen Harper, after appearing for years to have forgotten about the environment, appear to have finally seen the light.

That’s because they both have admitted, finally, that climate change is affecting the planet. More specifically, they’ve said it’s playing a role in increasing forest fire damage.

Let's back up a bit. Premier Clark actually said on Wednesday while touring her Okanagan riding: “Climate change has altered the terrain and it’s made us much more vulnerable to fire.”

Harper, on the other hand, having for years based his recipe for political survival on making Canada an “energy superpower” (by "energy," he means oil, fracked gas, and a dash of nuclear), stumbled his way towards half-admitting what every climate scientist, and most Canadians, already know.

Standing briefly for “a controlled photo-op” in scrub forest near a blazing forest outside West Kelowna, BC, last week – dressed incongruously in a blue business suit – Harper got caught having to answer one direct question from a reporter (all other questions were disallowed).

He was queried as to whether he thought global warming was contributing to forest fire intensity.

Unable to duck the question (there were witnesses) he muttered: “I think it’s possible.” Then he left.

So, there you have it.

The Prime Minister of Canada, the man entrusted with leading this country, thinks it’s “possible” that forest fires in B.C. and Saskatchewan — shaping up to constitute one of the worst fire seasons ever recorded in Canada — are connected to climate change.

A decade and a half ago, three scientists working for the federal government’s Canadian Forest Service wrote a paper in the peer-reviewed journal Science of the Total Environment entitled: “Climate Change and Forest Fires”. In this document, published on November 15, 2000, they state unequivocally that because of climate change, “increased forest fire activity” is likely, adding that “the fire regime will respond rapidly to climate warming”.

They wrote this six years before the Prime Minister ascended to the PMO and began, amongst other absurd actions, to muzzle Canada’s scientists, suppressing their expert comments in favour of carefully manicured pronouncements – almost always written – from non-scientist public relations flacks.

Stephen Harper wasn’t the first PM to diss the environment.

For the last quarter century, Canadian governments have ignored the environmental economic benefit of preserving Canada’s ecosystems, ignoring, among other fundamental attributes, their value in mitigating climate change. One critic noted in an interview with Global News that “virtually every single Canadian government has let us down on that front. And that’s not my opinion, that's the opinion of the Environment Commission of the Auditor General of Canada."

So Harper isn’t the first to ignore the values of Canada’s ecosystems. He’s just the latest, and by far the most aggressive.

In 2013, the losses were estimated at 4.2 million hectares, a seven-fold increase.

At this rate, much of Canada’s 348 million hectares of forest could be gone in just over 80 years.

What are they going to do about it?

Christy Clark and Stephen Harper, close political allies as they are, both refuse to actually do anything to mitigate global climate change. Both continue to offer unwavering support to the fossil fuel industry – Clark for the fracking industry (for which she always uses the euphemism “LNG”), and Harper for the tar sands and fossil fuels in general, at the expense of renewable energy initiatives.

Clark has, for years, pursued a relentless course of promoting greenhouse-gas generating fossil fuel production. In fact, when she opined about climate change, standing next to the Kelowna fire, she was only two days away from the third reading of the Liquefied Natural Gas Project Agreements Act, otherwise known as “The Great Petronas Giveaway Act”, which allows a Malaysian state-ownedoil and gas company indemnity from any increased costs associated with BC’s regulations and laws for a full quarter century.

She did this in the face of a $700 million corruption scandal involving the Malaysian Prime Minister that has paralyzed that country’s government, which receives a significant part of its revenue (up to 45 per cent) from Petronas.

Christy Clark’s climatological timing is even more bizarre. This year’s El Niño, the famous warming current that plays havoc with climate patterns, is rapidly intensifying and headed towards becoming the warmest in recorded history, with likely warming effects on BC.

Two years ago, a link between the strength of El Niño and climate change was suggested in a study of 7000 years of coral growth patterns.

Nationally, Stephen Harper continues his protective stance towards fossil fuel extraction, postponing the end of the industry until the end of the 21st century – a half century later than advocated by German Chancellor Angela Merkel and others – and resolutely ignoring widespread international condemnation.

Thanks to our climate-change-denying Prime Minister, Canada is increasingly seen as “the world's leading foot dragger on climate issues”.

We’re ranked 36th among nations in terms of population, but 5th in the world for oil production and 9th (even higher, according to some studies) in the world for greenhouse emissions per capita.

On the very day that Christy Clark and Stephen Harper were engineering their brief photo-op on the hills outside Kelowna, the multinational investment firm, Morgan Stanley, warned that the current dramatic slide in oil prices could continue for as long as three years.

Yet while finally deigning to make mention of “climate change”, both leaders continue to drag Canadians down the rocky road to ecological and economic ruin, seemingly oblivious to the difference between a photo-op and real life on Planet Earth.

Incidentally, Thomas Mulcair said, in a TV interview on July 22, that “this is a battle that the world has to take on. Climate change is real, reducing greenhouse gases has to be made a priority. It can be done.”

If he means it, then it sounds like he’s been listening to Pope Frances and Naomi Klein, two people who Christy Clark and Stephen Harper never talk about.

I think it’s time for a change in the Clark’s and Harper’s thinking.

And while we’re at it, it’s probably time for a change in leadership.