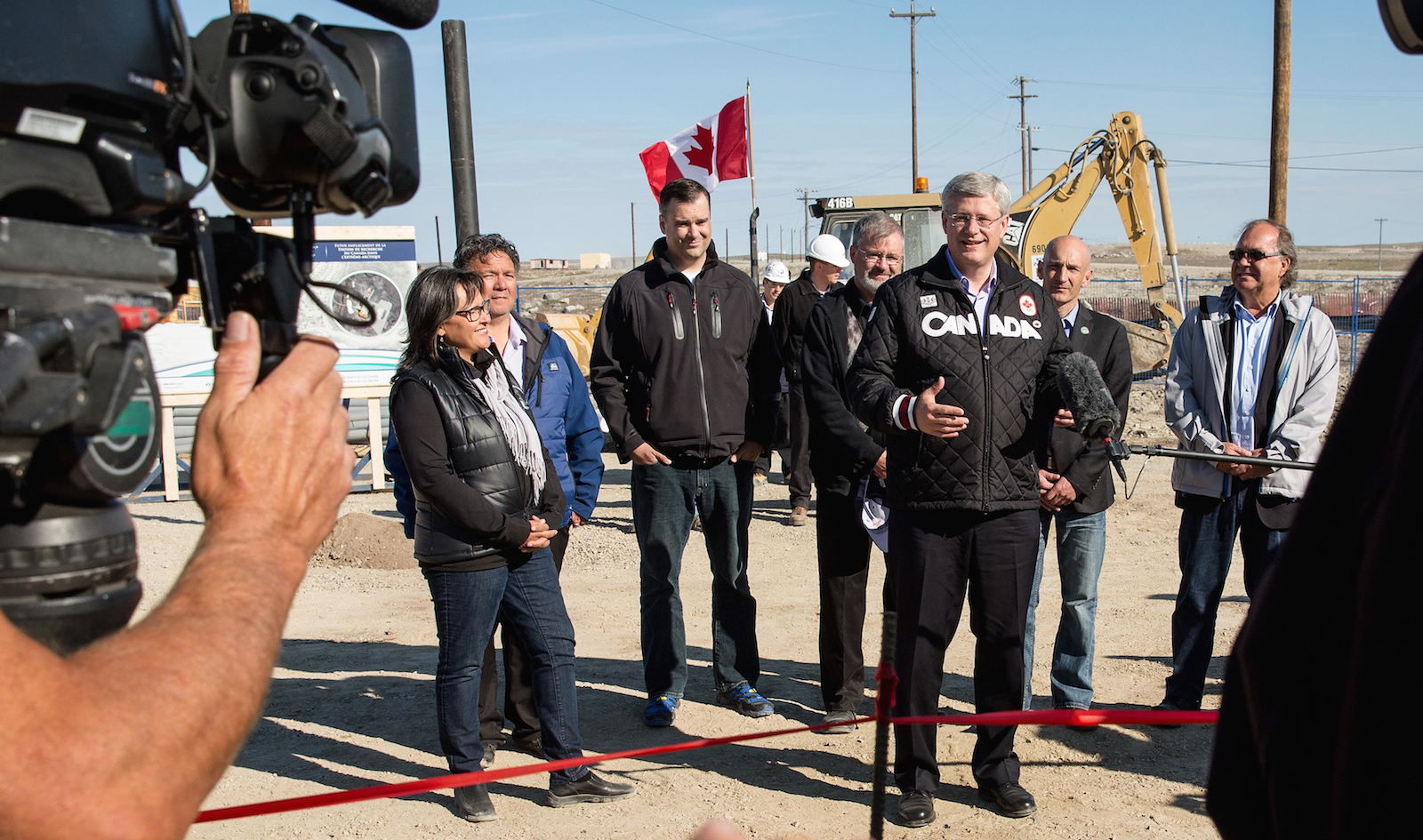 A hugely expensive public contract to build an Arctic research station —promoted by Prime Minister Stephen Harper —went to a joint venture that included a company run by a Conservative Party insider with close ties to Environment Minister Leona Aglukkaq, the National Observer has confirmed.

An $85-million construction contract to build the Canadian High Arctic Research Station (CHARS) was awarded in June 2013 to a partnership between EllisDon and NCC Dowland Construction —the latter is controlled by a prominent Iqaluit businessman, Greg Cayen, who has been a key planner behind Leona Aglukkaq’s two federal election victories.

Work is now underway on the two-storey "world class" Arctic facility in Aglukkaq’s home riding of Nunavut in the isolated hamlet of Cambridge Bay, population 1,600.

CHARS is a signature piece of the Prime Minister’s northern strategy, and will focus federal research on supporting Arctic oil, gas and mining extraction, as well as predicting the impacts of climate change on "shipping, communities and infrastructure."

Stephen Harper was so enthused by the project that he journeyed to the barren site —in his ninth annual Arctic visit —in August 2014. He smiled with a shovel for the groundbreaking ceremony, and gave the project high level publicity with his PMO press releases.

But troubling for critics is how the construction job flowed to such a well-connected Conservative to the local federal minister. Two other companies had bid.

Greg Cayen is a director with Nunavut Conservative Association, and served as its president in the 2011 election. Past vice-president Elisappe Sheutiapik in Ottawa said Cayen and Aglukkaq have enjoyed a “fairly close” relationship since Aglukkaq dived into federal politics in 2008. She confirmed that Cayen has been a key planner behind the minister's electoral ground game.

And just two weeks before, Cayen’s business partner —Patrick McGuinness of London, ON—ran three sister Dowland construction businesses (Dowland Contracting, Dowland Industrial Works, and 6070 N.W.T.) into financial ruin. In May 2013, an Alberta Superior Court ordered the companies into receivership for owing $119 million to more than 600 companies across Canada—creditors from the Royal Bank to welders to plumbers were owed vast sums.

Drills, ladders, hoists, shackles, wires, welding rods and saws were all seized to pay off some of the debt. Some contractors were paid in full, but others reached by the National Observer said they were not. Dowland Contracting filed for bankruptcy.

Dowland companies also defaulted or walked away from several multi-million jobs, including:

The sudden collapse of the Dowland group in 2013 even left the Anglican Diocese of the Arctic praying for an intervention. The diocese, which hired Dowland Contracting to build its cathedral, was left suddenly having to pay a $2.6 million bill to the doomed company’s receiver.

Minister Aglukkaq did not respond directly to questions about her political relationship with Cayen, or how it was that a business connected to such failures could win the CHARS construction job.

The NDP MP for the neighbouring Northwest Territories riding said something stinks about this Arctic construction procurement.

“Here are these people who were engaged in doing this kind of work, and they failed, and they then got a government contract again. [It’s like] there’s no penalty for failing,” said Bevington.

But Aglukkaq’s office suggested there was nothing fishy about the tendering of the CHARS contract to her political associate, and called opposition attacks "shameful."

"The contract was awarded through a fair and open tendering process, and included requirements to ensure that Inuit benefit from jobs and economic development within their communities while advancing Northern science,” Aglukkaq’s spokesperson said Monday.

Her office added that, technically, the federal corporation that got the job —NCC Dowland Construction —was not among those named on the May 2013 receivership order that placed provincially registered Dowland companies into receivership.

Winnipeg-based architect John White, who worked for years with Public Works and is familiar with Arctic projects, said “there certainly is the appearance of a conflict of interest.”

"I can’t understand it. The public works that I knew prides itself on doing things in a very correct manner in terms of contracting,” he added.

The RFP document for the CHARS tender states that Canada may reject any bidder that is “bankrupt” or in the past has "conducted himself/herself improperly.”

Numerous attempts to reach Cayen at his business offices were not responded. An online biography says Cayen’s northern real estate and construction businesses are "valued in excess of $400 million.”

Construction giant EllisDon declined to comment on what role NCC Dowland played in securing the contract in Aglukkaq’s riding, or how the $85 million in public monies would be split in its joint venture.

Another construction management company that does business in the north said the procurement was “odd” but instep with protectionist measures in Canada’s north that favour local businesses, even failed ones, to encourage northern development.

The Conservatives have made Arctic sovereignty a key thrust of its northern policy. Other efforts included the discovery of the doomed Franklin ships last year.

The Arctic holds around 30 percent of the world’s undiscovered natural gas, and 13 per cent of undiscovered oil according to Shell Oil.

Harper recently canceled his annual trip to the Arctic this year, with his officials telling media that he's focused on the election with the first leaders' debate in August.