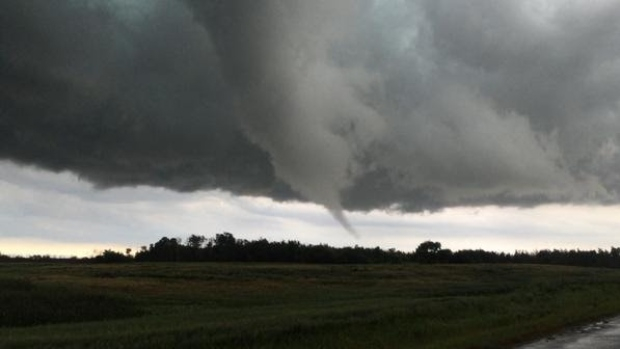 Sean Schofer tweeted this photo of a tornado north of Edward, Man., on Monday evening. From CBC.
Previous story

Officials were tallying damage Tuesday from a tornado that hit rural areas of southwestern Manitoba and lasted up to what Environment Canada called an "incredible" three hours.

Video and photos taken by storm chasers showed a wide-based, wedge-shaped tornado near the community of Tilston, as well as a multiple-vortex system swirling through nearby farmland just as the sun was setting Monday night.

At the centre of it all was Fred Raynor, a farmer near Tilston who was in his house and sent his family, including two grandchildren, downstairs to the cellar as the storm approached.

"I stayed upstairs just because I always tell them, 'If something is going to happen to me, I want to see it happen to me,'" he said.

Trees were uprooted and fell on the roof, and the house began to rattle.

"I was sitting on a chair at the (kitchen) table and you could feel the whole house shaking."

Some 50 kilometres away, Jeff McConnell, the mayor of Virden, was watching the storm approach. He posted a message on Twitter to tell his town's residents to take cover and went to his basement. He kept an eye on social media and hoped the tornado would lift.

"What I was thinking was 'OK, this thing is going to die out,' but ... as the storm was tracking to the north (toward Virden), 'It's not dying out'," he said.

"When you consider the size of the storm and nobody was hurt, that tells me that either we were all very lucky, or people were all paying attention to the warnings."

The tornado didn't hit Virden, but the town was whipped by strong winds and heavy rain that lasted for hours.

Back in Tilston, Raynor was relieved when the storm passed. He spent Tuesday assessing property damage. Sheds and other structures were severly damaged, and his home's roof was in need of repair. But his family was unhurt.

Initial reports across the region indicated damage was limited mostly to farm outbuildings. Images on social media showed toppled grain bins and chunks of asphalt lifted from a rural road.

There were no reports of injuries.

"It seemed to have hit a lot of open fields and it didn't hit a town or a city," Environment Canada meteorologist Terri Lang said.

Fred Faucher, who lives near Virden, said the storm damaged buildings on his property as it swirled through the area.

"My shed, the roof is gone. It's twisted all around the yard. It's in the field. And my maple trees are down and I've got siding missing on my house," Faucher told Brandon radio station CKLQ.

Tornadoes are not uncommon in the Prairie provinces. A 30-year tally by Environment Canada shows there are about 62 twisters across the country every year — about two-thirds of them on the Prairies. While they appear formidable and can present a danger, most have wind speeds on the lower end of the scale and hit unpopulated areas.

What was unusual about Monday night's tornado was its duration. Usually, tornadoes touch down for a few minutes, but this one — at least by witness accounts — appears to have stayed on the ground for almost three hours.

"We generally don't see them last that long," Lang said. She added Environment Canada workers were looking at the damage Tuesday to assess the strength of the tornado.

Two tornadoes that did prove fatal on the Prairies were in the middle or upper end of the five-category Fujita classification system.

An F4 twister that ripped through the eastern part of Edmonton and neighbouring Strathcona County on July 31, 1987, killed 27 people and injured hundreds.

On July 14, 2000, 12 people were killed when an F3 tornado struck a campground at Pine Lake in central Alberta.

An F5 tornado that hit the town of Elie, Man., on June 22, 2007, did not kill or injure anyone, but it levelled several houses and swept one clean off its foundation.

Monday's storm was also felt in Saskatchewan. Regina was deluged with 73 millimetres of rain, which caused localized flash flooding in some streets.