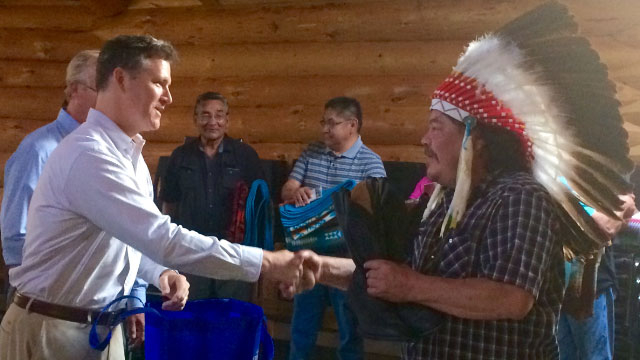 A new agreement signed by pipeline giant TransCanada with a group representing Ontario First Nations has raised alarms that the oil and gas industry is trying to buy social license in order to build its Energy East pipeline.

Grand Council Treaty 3 — representing 21 First Nations across Ontario — entered into a Communication Engagement and Funding Agreement (CEFA) with TransCanada, in which the company would pay $717,500 over 2015 and 2016 for communications and engagement relating to Energy East.

TransCanada called the agreement a "first important step," though Grand Chief Warren White (Ogichidaa) of Ontario's Anishinaabe Nation said in a news release that it doesn't mean Council is on board with the pipeline project.

Some, however, are concerned by sections in the agreement suggesting that signatories must not support protests that prevent physical access to territory by TransCanada staff or contractors hired to work on Energy East.

"Two of the most alarming features of it is: one, this clause that talks about forbidding Grand Council Treaty 3 from supporting anyone who may engage in a protest against Energy East, which kind of stacks them up on one side at the very beginning of the consultation process," said Alex Hundert, a media liaison for Grassroots Indigenous Water Defence's Anishinaabe Water Walk.

He referred to section 4.2(e) of the agreement, which states:

"To not support any member of GCT3 (Grand Council Treaty 3) or other individual group, in deliberately physically interfering, in a matter contrary to applicable law, with the lawful use of the Project Area or the Facilities by Energy East or its representatives."

Another section states that in the event of a dispute, nothing can prevent Energy East from immediately accessing the project area for maintenance, operation and repair.

The Energy East pipeline, if built, would become the largest pipeline in North America and the third-largest such pipeline globally. It would carry 1.1 million barrels of oil sands and Bakken petroleum products across six provinces and through the territory of 180 First Nations.

The project has encountered significant opposition in communities including Grassy Narrows, north of Kenora, where First Nations suffer from the effects of ongoing industrial mercury dumping in the area's waterways 40 years ago, which undermined fishing and tourism businesses in the area.

Grand Chief Warren White has been a vocal critic of the Energy East. At a hearing in Kenora, Ontario, on Jan. 13, he denounced it as being "here for the dollar signs and nothing about the land."

TransCanada stated on its website that the agreement it just signed with Grand Chief White and the Grand Council "means we will be able to show why Energy East is important to communities along its route and the measures our teams will take to protect the land and water."

Back in January, the company was accused of using "divide and conquer" and "delaying tactics" in order to win support, according to the Kenora Daily Miner and News.

Clayton Thomas-Muller, Indigenous climate campaigner with 350.org and member of the Mathias Colomb Cree Nation, said the new agreement is a sign that industry is stepping into a role that should have been handled by the federal government.

"It’s a clear, glaring example of the fundamentally flawed First Nations consultative process here in Canada," Thomas-Muller said. "There are no set standards for consultation."

He said the federal government neglected its fiduciary and legal obligation to consult First Nations, and that it handed this role to corporations instead of providing resources needed for meaningful discussions between the two parties.

"When you have a corporation — the proponent of the project — doling out money for the consultations, then inexplicable things can happen in terms of ways they can influence, or put pressure on communities," Thomas-Muller said.

"It should really be the federal government stepping up and helping to do the consultations that’s defined by laws here. They have to start consulting at the inception of the idea, not years into the conceptualization of the process, which is what this current situation is."

Thomas-Muller will be joining the Anishinaabe Water Walk, an upcoming week-long Energy East protest starting on August 2. The walk follows the pipeline route.

Speaking on behalf of Grand Council Treaty 3, territorial planning unit director Jeffrey Ross insisted TransCanada would not have any unfair advantage in talks about Energy East, and said the timelines and scope of the meetings were mutually agreed upon.

"We're just sharing information," he said. "The big part about this is that Energy East has agreed to respect Grand Council and the territory."

Ross said in May 2014, Grand Council approached TransCanda about Energy East and wanted to engage in discussions. He said Treaty 3 chiefs authorized the plan to begin an engagement process because they needed more information on the project.

Thomas-Muller argued that First Nations may be under pressure to accept agreements with TransCanada, given the Harper government's budget cuts to Grand Council Treaty 3, which forced chiefs to lay off police officers in 2013.

Despite assurances that negotiations will be fair, some people in First Nation communities along the Energy East route are worried that certain sections of the agreement will undermine their ability to express dissent.

Hundert also worried that since the funding is coming from TransCanada, consultants or experts hired for the process would be supportive of the project, while critical views go unheard.

"I think that's going to be a huge part of our discussion," he said. "Of course, we want to hear their opinion, but moreover, we want to hear if they have the correct information. Where are they getting the information from? We want to make sure everyone in the nation has the right information — not just something that's part of the agenda of some environmental advocacy group."

Referring to the Anishinaabe Water Walk protest, he continued:

"The engagement officer and myself will join the walk ourselves just to engage with some of the group members there."

Ross acknowledged that there is a clause in the agreement that protesters can't physically block the Energy East pipeline or prevent contract workers from doing their job. However, he suggested that critical views would be welcome so that Energy East can first identify, then mitigate where the project impacts Aboriginal treaty rights.

Grassy Narrows resident and mother Chrissy Swain said she was concerned about the pipeline's impact on the waterways, and how it might affect the community's health in the event of an oil leak.

"Something like that already happened to us with the mercury poisoning — we're still struggling to get them to clean up the mess," Swain said. "If a spill happens here, will people try to sweep it under the rug again? There's still a small percentage of water here that's left clean. We still live off this land."

TransCanada spokesperson Tim Duboyce did not respond to questions about the Grand Council Treaty 3 agreement, but sent an email with links and bullet points from the company website, stating that the company has held over 1,700 meetings with First Nations and that "fostering strong, long-term relationships with Aboriginal communities is...an integral part of everything we do at TransCanada."