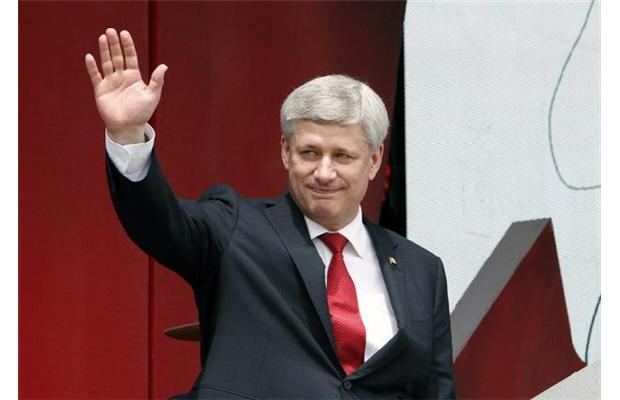 Stephen Harper has declared the 2015 election officially on, triggering an an 11-week election campaign in advance of an Oct. 19 vote.

The Conservative Party leader said this election is about addressing the economy, national security, and global instability. He cited concerns with ISIS in the Middle East, the threat of Russian aggression, and a sagging global economy.

"This is no time for risky plans that could harm our future," he told reporters outside Rideau Hall Sunday morning in Ottawa. "A national election is not a popularity contest."

He also shrugged off reporter questions about the additional cost to taxpayers for the extra lengthy campaign, seen to benefit the cash-rich Conservative party.

Then NDP Leader Thomas Mulcair said in his own press briefing in Gatineau, Que. overlooking the House of Commons:

"Canadians have a clear choice —four more year of Harper and Conservative, or my plan for change." He said the Harper's handling of the economy has been poor, noting that "wages are falling, incomes are stagnant, and household debt is skyrocketing."

"Harper has the worst economic growth records since 1960. The economy has shrunk in the last five months," Mulcair added. He took no media questions.

Liberal leader Justin Trudeau is in Vancouver for the Pride parade, and said in a press statement:

“We want change that will make a real difference in the lives of all Canadians – change that will help families make ends meet, put more money in their pockets, and bring this country together,” said Trudeau.

Bloc Québécois leader Gilles Duceppe gave a press briefing entirely in French, and told CBC he was surprised by the number of young people that have been joining his separatist party.

Green leader Elizabeth May said from Sidney on Vancouver Island, in her riding of Saanich—Gulf Islands, that she was dedicating the Green Party campaign to Flora McDonald —a Progressive Conservative politician, and Canada's first female foreign minister, who recently passed away.

She reminded voters that the barrage of "nasty" TV election they are about to experience will be half paid by taxpayers through election rules. "Shame on you, prime minister," she said for suggesting the campaign is being fairly fought by the parties on an equal financial footing.

The election is a rare summer campaign that promises to stretch nearly three months — the longest in more than a century.

It's also expected to be the costliest campaign ever, as well as the first in which three parties all have a legitimate shot at winning — a sure formula for a vicious, no-holds-barred battle. Liberals said Friday that an early election call would cost the taxpayers an additional $125 million.

Harper stands to become the first prime minister since Sir Wilfrid Laurier in 1908 to win four consecutive elections, if he succeeds in 2015. He's expected to get the Conservative campaign underway at a rally later today in Montreal.

On Friday the New Democrats made it clear that Mulcair would not take part in any leaders' debates that didn't include Harper.

Such an unusually long campaign would allow parties and their candidates to spend more than double the spending limits of $25 million and $100,000, respectively, that would have applied for a minimum 37-day campaign.

Having amassed vastly more money than any other party, the increased spending limits give the Conservative party and its candidates a huge advantage over their more impoverished rivals.

It's been clear for weeks how the ruling party intends to use its financial advantage: to carpet bomb the air waves with attack ads.

Conservative ads trashing Liberal Leader Justin Trudeau as "just not ready" to be prime minister have been ever-present on radio and television for more than two months already. Liberal insiders admit they've been effective, contributing to the Liberals' slow decline in the polls to third place from their front-running status over the previous two years.

Late Friday, the Conservatives suddenly turned their sights on NDP Leader Tom Mulcair with similar attack ads depicting him as an unethical, opportunistic "career politician." Having helped drive Liberal support to the NDP, they've now evidently decided they need to blunt Mulcair's momentum at the outset of the campaign.

The shifting targets of the Tory ads reflect the tricky two-front war facing the governing party.

At a time when the economy has tanked and polls suggest two-thirds of the electorate are looking for a change, the Conservatives risk driving change seekers to coalesce behind the NDP if they attack the Liberals too hard, and vice versa. They'll attempt to strike a balance, attacking both and warning that the economy is too fragile to risk putting it in the spendthrift hands of either Mulcair or Trudeau.

But Mulcair and Trudeau also face two-front wars — with each other as much as with Harper. Each will be attempting to prove that his party is the vehicle that can defeat the Conservatives and provide real change. And in doing so, they'll be fighting not just to win the election but, potentially, for the very survival of their respective parties.

In either scenario, the opposition party that emerges strongest on Oct. 19 will have the upper hand; the weaker party could face possible extinction.