Harper, the federal election, and the future of the CBC 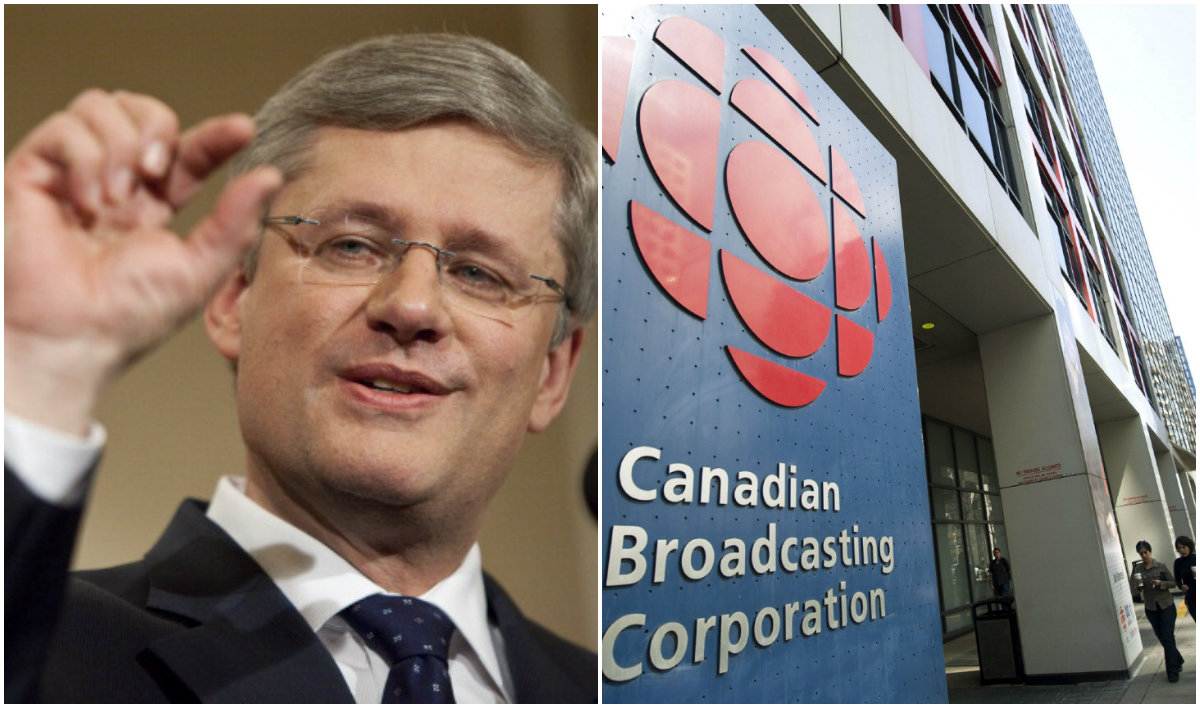 Stephen Harper is already notorious for his obsession with information control and for avoiding contact with Canadian media, especially experienced political reporters, regardless of their political sensibilities.

And if the Conservatives win the election this October, we may never get the straight goods again about what’s going on in Canadian public affairs.

During the election campaign, this control will tighten to an amazing degree. Only people vetted by his political handlers will be allowed to come near the prime minister.

While avoiding media, Harper has been busy creating a parallel political information machine, using the corporate funds his party receives to create what one communications expert has called a “public relations state.”

Underlying this relentless drive to shape what Canadians are told about him has been one abiding project for Stephen Harper: weakening the CBC.

Despite being the pre-eminent source of news on public life in Canada, the CBC has been targeted in the prime minister’s search-and-destroy plans. For over a decade, he has been mobilizing forces to turn the national broadcaster into a spent force, both now and in the long run.

While in Opposition, Stephen Harper said, at a May 18, 2005 press conference:

“… When you look at things like main English-language television and probably to a lesser degree Radio Two, you could look there at putting those on a commercial basis."

It was part of his general denial of a distinct “Canadian” culture, separate from the U.S. He acknowledged only that there are “regional cultures within Canada, regional cultures that cross borders with the US. We're part of a worldwide Anglo-American culture. And there is a continental culture."

So if Harper believes Canada lacks a “Canadian” culture, and if the only thing he considers to be important is “the economy” – then he sees nothing wrong with turning the CBC into just another commercial station.

There are three ways he intends to do this.

First, there’s the approach he’s used since he got into power: cutting resources and stacking the CBC leadership with Conservative supporters.

As this graph from the Friends of Canadian Broadcasting shows, Harper has incrementally reduced the CBC’s budget – not as fast as in the early Chrétien years, when the CBC operated on a much grander scale, but in a slow and inexorable fashion, now reaching all-time lows.

Another strategy has been to fill CBC's board with people who support his political aims – small government, reduced public services, and shrinking taxes.

Included in the Conservative Party insider group that directs the affairs of the CBC is the president himself, lawyer Hubert Lacroix, well-recognized in his home province of Québec for his pro-business bias, and for his generally lukewarm defence of the public broadcaster.

Creating a political atmosphere that renders the CBC vulnerable

The second way that the Prime Minister is working to neutralize the CBC as an independent force is to create a regulatory environment that leads inevitably to the reduction of the scope and power of the national broadcaster.

Back in 2008, when Harper was leading a minority government, he fulfilled a 2006 election promise and convened a session of the Commons Standing Committee on Canadian Heritage focused on the CBC. Lacking majority powers, the Committee had only five out of 12 members from the Conservative Party, and as a result its report, “CBC/Radio Canada: Defining Distinctiveness in the Changing Media Landscape,” published in February, 2008, was quite supportive of the national broadcaster.

To accomplish this, the Committee also firmly recommended that the CBC receive “stable, multi-year funding… indexed to the cost of living. Funding should be for a period of not less than seven years and be established by means of the proposed memorandum of understanding.”

The Senate sets up the dismantling of the CBC

In 2010, CBC management was sharply criticized by various Conservatives for alleged “Liberal bias.” So, it commissioned a study to examine if this was so. The study showed that the CBC gave more time to Conservative MPs than MPs in all other parties (65 per cent of air time), and more than private broadcasters as well.

A study was released a few weeks ago by the Senate Standing Committee on Transport and Communications. This body had a majority of Conservative members (six out of nine), and no NDP or Party representation (both NDP and the Greens support expanded funding for the CBC).

The Senators went off to the UK to study the BBC, famed around the world for exemplary coverage of public and world affairs – and a lack of commercial bias. The study noted that public funding of the BBC is three times greater than the CBC receives, and that the physical area covered is only 2.4 per cent of Canada, and that Canadian broadcasters have faced intense pressure from the much larger US industry for decades, and that broadcasting in Canada is complicated by two official languages and six time zones. (p.21-22)

Then, under Stephen Harper’s watchful eye, they ripped the CBC apart, asking it to:

We should not be giving the CBC money, period, the study concluded.

And in 2015, in contrast to 2007, the Senators declared that advertising on the CBC is a great idea.

What the Senate ignored

Clearly, the CBC is Canada’s primary window on ourselves and our country, and relatively free of US broadcasting hegemony, in contrast to commercial media.

But the Senators ignored this, and, still hewing to their line of “no more money,” citing witnesses who said the CBC “could certainly offer a lot more Canadian content without necessarily spending more.”

They asked for more “amateur sports,” more “municipal and local affairs,” more programs like “Reach for the Top” which “promotes education and inspires our youth to reach for academic excellence.”

The CBC could do everything, they implied, except report inconvenient news.

Harper, the CBC and the Trans-Pacific Partnership (TPP)

It just gets worse.

Many readers have by now heard about the Trans-Pacific Partnership, that massive corporate-dominated draft agreement that governments are negotiating behind closed doors to control the management of 40 per cent of the world’s economic output.

The process has been driven by the dominant player in the Pacific Basin (for now) – the United States.

So well-guarded are the negotiations, very little would be known about the actual content of this trade deal or about the positions of the various players involved in it without the efforts of Wikileaks, the international investigative journalism organization that specializes in displaying secret government and corporate documents of compelling public interest.

Canada has been an observer of these negotiations since 2010, and an active participant since 2012.

There are 16-17 Pacific Rim nations involved — but China, notably, is not one of them.

Harper has made the completion of the TPP by the time of the election one of his major goals. Unfortunately for him, there are severe fault lines dividing countries in the negotiating process. Protests have emerged and are growing rapidly, outcry from citizens’ advocacy groups around the world.

The TPP is several trade deals in one, but the part that relates to the future of the CBC addresses the issue of “state-owned enterprises.”

These are legal entities that carry on commercial activities on behalf of a state government, while pursuing public policy goals as well. The CBC is a state-owned-enterprise of the Canadian government.

The TPP would require enterprises like the CBC to become subject to “commercial considerations.” This means that the operation of the CBC would have to be based on the same rules as the operation of any private business, its focus profit and loss.

The TPP process could also mean the CBC would have to open its doors to competitive bidding from other parts of the world, and buy services from any source outside the country that offered a service as cheap as or cheaper than a Canadian business. So one day, CBC podcasts could be sold from Calcutta or Taiwan, or CBC computer and other technical services could be carried out in China.

The TPP might very well require the CBC abandon any special arrangements with the federal government and function “impartially” - meaning just like any other business, and any provisions about supplying Canadian content, or acting as a vehicle for Canadian culture, could go out the window.

The current government allotment — inadequate as it is — could be gone. If programs from another country such as the U.S. could be purchased for less than Canadian programming, no matter what their content, then the CBC might not be able to refuse to buy or lease them.

In broad terms, the Trans-Pacific Partnership, which Harper wants desperately to see approved and implemented by the time of the election, would destroy the entire meaning and purpose of the CBC.

It would also infringe on Canadian cultural expression and on the right of Canada to have a service of any sort – CBC, Canada Post, Canadian National Railways – that is expressly adapted to the needs of our country and its citizens.

I would suggest that if you’re not concerned about the implications of this far-reaching and invasive agreement, which violates Canadian sovereignty and self-determination in very fundamental ways, then you’re living in a dream-world.

The negotiations of the deal have just been suspended, but Canada has vowed to participate as soon as they restart.

We’re at a crucial turning point.

I believe we must defeat the Harper Conservatives, before they convert this country into a branch plant operated out of the headquarters of a collection of far-away multinational corporations.