Cry me a tailings pond, Canada 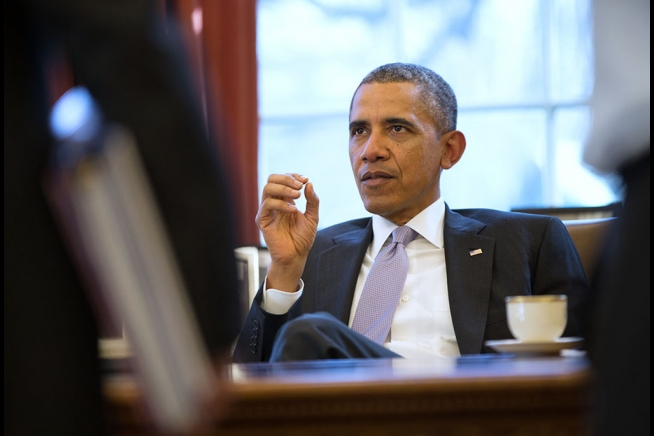 The United States has its Clean Power Plan. Canada has the tar sands.

That sums up the difference between the two countries when it comes to dealing with climate change.

The Clean Power Plan that U.S. President Barack Obama unveiled on Monday puts the Americans on track to reducing carbon dioxide emissions by 32 per cent from 2005 levels by 2030.

“If you compare that to Canada, at the federal level there’s been essentially an absence of a climate plan,” according to Anthony Swift, the director of the Canada Project for the U.S.-based National Resources Defence Council.

Obama's announcement Monday highlighted the clashing approaches toward climate change between the U.S. and Canada.

Instead of concentrating on reducing emissions, the Canadian government has spent more time lobbying the U.S. to allow the Keystone XL pipeline, which would transport heavy crude oil from the Alberta tar sands to the U.S. Midwest and Gulf Coast.

Swift says that many of Canada’s sectors have seen declines in emissions and that without the tar sands the country would be on track to meet its Copenhagen commitments. “But what’s happening is the expanded tar sands sector is swamping all other progress being made elsewhere in the country.”

While the U.S. assumes an ambitious leadership position on tackling climate change, Canada obfuscates and plays politics instead.

David McLaughlin, the strategic advisor on sustainability at the University of Waterloo, says Canada aimed for the same targets as the U.S. in Copenhagen, but then separated its climate change targets from the Americans as soon as the latter began to make progress.

Canada then proposed reducing oil, gas and tar sands emissions in concert with the U.S., knowing that it’s not as important an emitting source for them as coal-fired electricity. “The Canadian government knows this,” McLaughlin says. “It’s a game. It’s a punt.

“It kicks the can downfield, so what you have is a completely different focus of ambition and stringency in Canada versus the U.S. The U.S. is going after their most important source of emissions and we’re still leaving ours.”

Ottawa’s approach is to find a way to make fairly low-grade emission reductions, so that Canada isn’t way out of line with everyone else, but not so much that the country leads either, according to McLaughlin.

“Certainly Obama doesn’t see that. Europe doesn’t see it that way. Neither does Trudeau or Mulcair.”

The differing views have led to a disconnect between the two countries.

“Given these weak federal regulations, it’s not surprising that Canada is one of the only developed countries that is completely off-track for meeting its Copenhagen commitments,” Swift says.

In 2014, the Canadian Commissioner of the Environment and Sustainable Development scolded the federal government for exactly weak regulation. The commissioner’s report said the government wasn’t doing enough to reduce greenhouse gas emissions and fight climate change.

Among other things, the report cited a delay in regulations to reduce emissions, a lack of a planning process as to how the government would achieve its national target, and a lack of coordination with the provinces and territories.

The commissioner noted that in 2012 the federal regulatory approach was unlikely to result in emissions reductions to meet the 2020 Copenhagen target. In 2014, the commissioner wrote that evidence was stronger still that the target would be missed.

Fast forward to 2015 and Canada is still nowhere close to meeting the Copenhagen target – despite years of warnings.

Climatetracker.org, a group of four research organizations that keep tabs on climate change commitments, ranked 13 countries ahead of the forthcoming Paris climate change talks in December.

Taking into account Obama’s Monday announcement, Climatetracker gave the U.S. a rating of "medium." Canada scored "inadequate." Compared to the US, Canada will miss its 2020 and 2030 pledges by “a wide margin,” according to Climatetracker.

Not surprisingly, climate change has turned into a source of tension between the U.S. and Canada, with Obama reportedly prepared to reject the Keystone XL pipeline proposal.

The other key difference between the countries comes in how they approach the renewable and clean technology market, which is what the U.S. sees as a replacement for fossil fuel power.

Dan Woynillowicz, Policy Director at Clean Energy Canada, an initiative of the Centre for Dialogue at Simon Fraser University, says Canada is largely betting on carbon capture and storage. While there is support for other clean energy technologies, Woynillowicz notes the Canadian government has wound down more clean energy policies and programs than they’ve introduced. “It’s been the opposite in the U.S.”

“The Canadian government has spent a lot of time articulating what we can’t do on climate change—we can’t put a price on pollution, we can’t hinder our fossil fuel industry, and ultimately we can’t be leaders,” Woynillowicz adds.

“President Obama has done the opposite, focusing on what can be done while also ensuring Americans understand why it should be done."