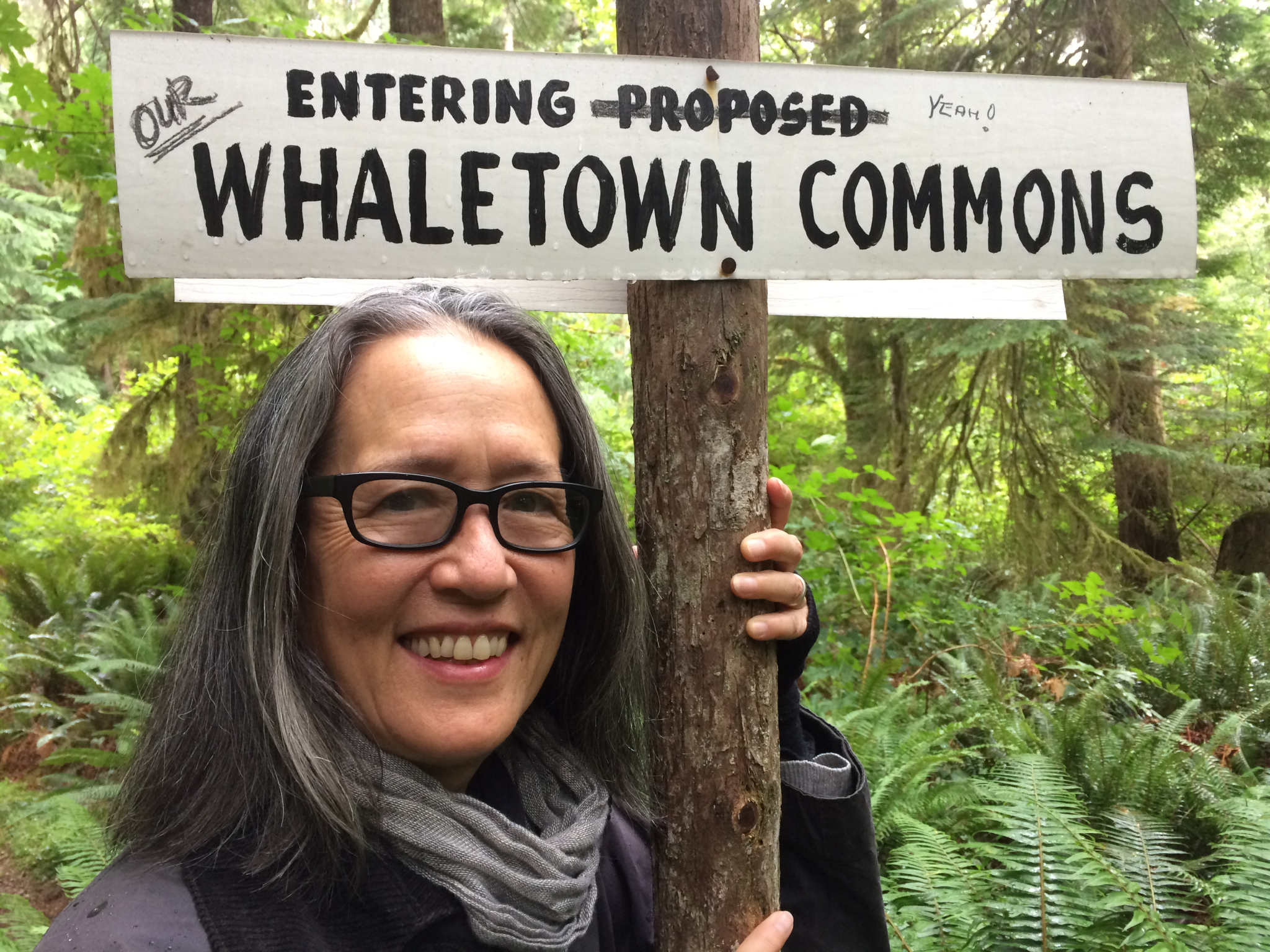 It could have been another clear-cut, but today Whaletown Commons is a public park and its story is one of patience, perseverance and community building.

To find the commons, you must travel to British Columbia’s Cortes Island in the Georgia Strait and make your way to the tiny settlement of Whaletown. If you travel to the island by boat, you’ll arrive at the Gorge Harbour Marina, a scenic moorage near the entrance of Desolation Sound and a stone’s throw from the commons.

The 70-acre commons is home to old-growth cedars and firs, a creek where cutthroat trout spawn, and (among other animals) wolves. It also bears the distinction of having been immortalized in one of writer Ruth Ozeki’s novels, A Tale for the Time of Being.

Ozeki, who is also a Zen priest, has an intimate connection with the commons. The author, short-listed for the Man Booker Prize, did more than use the park as a setting in her third novel; she helped make the Whaletown Commons a reality.

The author of three novels, Ozeki calls Cortes Island home. She is the winner of the LA Times Book Prize and the Medici Book Prize and her work has been published in over 30 countries. Her fiction focuses on environmental themes.

Ozeki is working on a new novel. She told the National Observer she doesn’t know much about its world yet, but was sure environmental issues will play a role. “How can they not? At this moment in time, it’s the issue of the moment, how we treat the planet. I find it difficult to be alive and not think about these things.”

No wonder Ozeki threw herself into the creation of the Whaletown Commons.

A succession of logging companies owned the land and shortly after Ozeki arrived on Cortes Island to live in the late 1990s, one of them carried out selective logging on the property. “It was a real wake-up call because we realized this could turn into a clear-cut at any moment,” Ozeki recalls.

Along with her husband Oliver Kellhammer and others in the community, Ozeki determined to save the ancient trees and their inhabitants. Together they formed the The Whaletown Commons Society to fund-raise and lobby for the purchase of the parcel of land.

A lot of hard work and patience followed. “These things take a long time,” says the 59-year-old author. “It’s not just about patience. It’s small, incremental steps and keeping at it even when the only progress you can make is small and incremental.”

The society raised funds through all kinds of inventive initiatives. Ozeki led a series called Imagine the Commons, which consisted of walks with a particular focus on an image-making medium or on data collection. The society held poetry, haiku, and photography walks and carried out bird counts and ecological surveys.

To raise money, Ozeki read from her second book, All Over Creation, about a small-town farmer defending his seeds and fighting off a large multi-national biotech corporation, during a brochure-folding party.

At the time, Ozeki recalled in the society’s blog that she got the idea for the evening from a documentary film she saw about a Cuban cigar factory, which hired a reader to entertain the workers while they rolled cigars.

The money trickled in incrementally as well: $5 here, $10 there. The largest donation was $10,000 from someone on the other side of the country.

Over the 17-year period, enthusiasm for the project soared and it waned. “At the height of it, it was really something,” Ozeki declares. “But then, as all things happen, there were times when, too, peoples' energy was diverted elsewhere.

“But the wonderful thing is the society, even though members changed over the decades, held and just persevered and I think that really paid off in the end.”

A turning point came in 2002-03. A couple of people began making discreet, but unauthorized, trails and those brought people onto the land. They began to see the trees, the creek that ran through the property and started doing wildlife surveys. They could see the land's profound beauty.

‘The arguments for turning this into a park grew exponentially once we had a trail system in there,” Ozeki says.

There was also some minor drama. The society had raised approximately $60,000, and at the meeting where the Strathcona Regional District was voting on the acquisition, they deemed that they needed to see the money. That precipitated a wild, last-minute dash to Campbell River on the ferry to secure the cheque and get it back in time to the meeting.

“It was all very dramatic in a small-town way,” Ozeki laughs.

In October 2014, the regional district purchased the property for $839,000 from the Island Timberlands forestry company. Regional district reserve funds and donations from the society and community helped pay for the land.

Today, the park is easily accessible for local residents, older people who find its short trails easy to walk on, and tourists. On Saturday mornings, Kellhammer and other members of the society lead interpretive walks through the commons, which Ozeki says are well-attended.

Ultimately, those $5 and $10 donations made a difference. It wasn’t up to one or two angel donors to step in and save the day. “It was really grassroots,” Ozeki says. “So the fact that it is now a park, I think there is a sense of ownership as a result of that.”