Protesters target oilsands mine in Utah under construction by Calgary firm 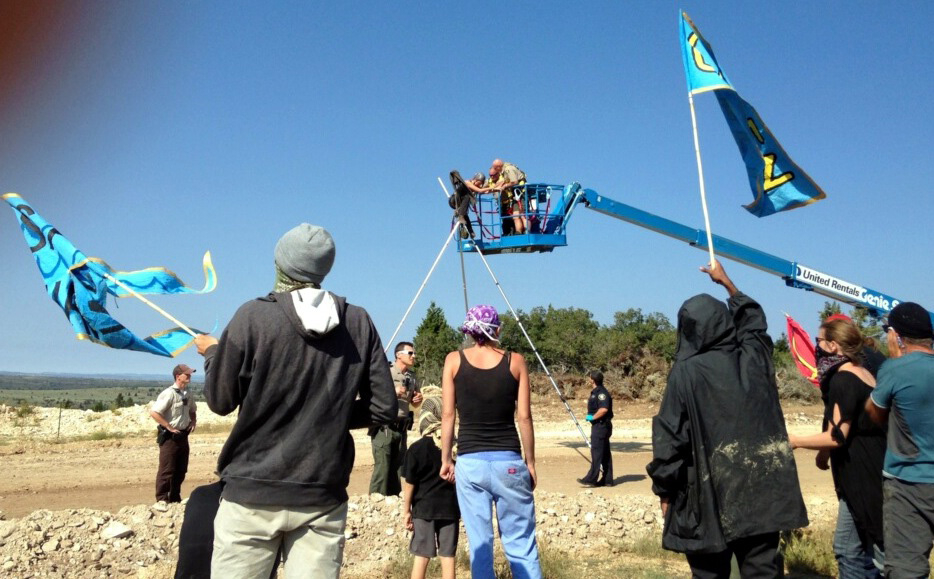 CALGARY — Dozens of protesters have disrupted work on an oilsands mine a Calgary−based company is building in Utah.

Melanie Martin, with a group called Peaceful Uprising, said four people were arrested Monday as they aimed to stop equipment from moving around the site.

Around 40 protesters were targeting a road that junior oilsands firm US Oil Sands (TSXV:US) is building, about a four-and-a-half−hour drive southeast of Salt Lake City.

Demonstrators sought to block access by erecting two tripod−like structures. Police used cherry−pickers to remove the activists from the top of the blockades, said Martin.

"Many people in Utah are very afraid of that happening here and of the impacts it would have on the Colorado river," she said.

"Looking at what’s happening downstream to the Indigenous people in the Athabasca region of Canada has had a major impact on propelling this campaign forward."

Martin lives in Salt Lake City, but in recent years has spent her summers in the Book Cliffs of eastern Utah, around where US Oil Sands is building its mine.

Martin said she feels she’s given the company a fair hearing, taking in presentations at industry conferences.

"Nothing has reassured us whatsoever that their project would be anything but a toxic mess for the Colorado Plateau region, or the southwest U.S.," she said.

The US Oil Sands project is tiny compared with those operating in northern Alberta.

With a capital cost of $60 million, US Oil Sands is aiming to produce 2,000 barrels in its first phase. The first oil is expected some time in the last three months of this year.

CEO Cameron Todd called Monday’s protest a "minor disturbance" and not the first the company has seen.

"There’s been a very small but very vocal group of anti−development activists that’s had various protests over the past few years and they occasionally trot out their banners and look for a media spectacle and try to make something happen and make a nuisance of themselves," he said.

"I don’t think they realize how hard it is for a big piece of equipment to stop or the fact that just because you can see the truck doesn’t mean he can see you. An active construction and mine site is actually a very dangerous place for people to be."

US Oil Sands is planning to extract oil from its mine with a biodegradable solvent made from citrus fruit. The technology means there’s no need for tailings ponds, the large wastewater pools that have been a major focal point of environmental campaigns against Alberta’s oilsands.

Todd said he doubts opponents of the Utah mine have the environment at heart.

"We’re the environmentalists. We’re the people that are here looking for a sustainable future."