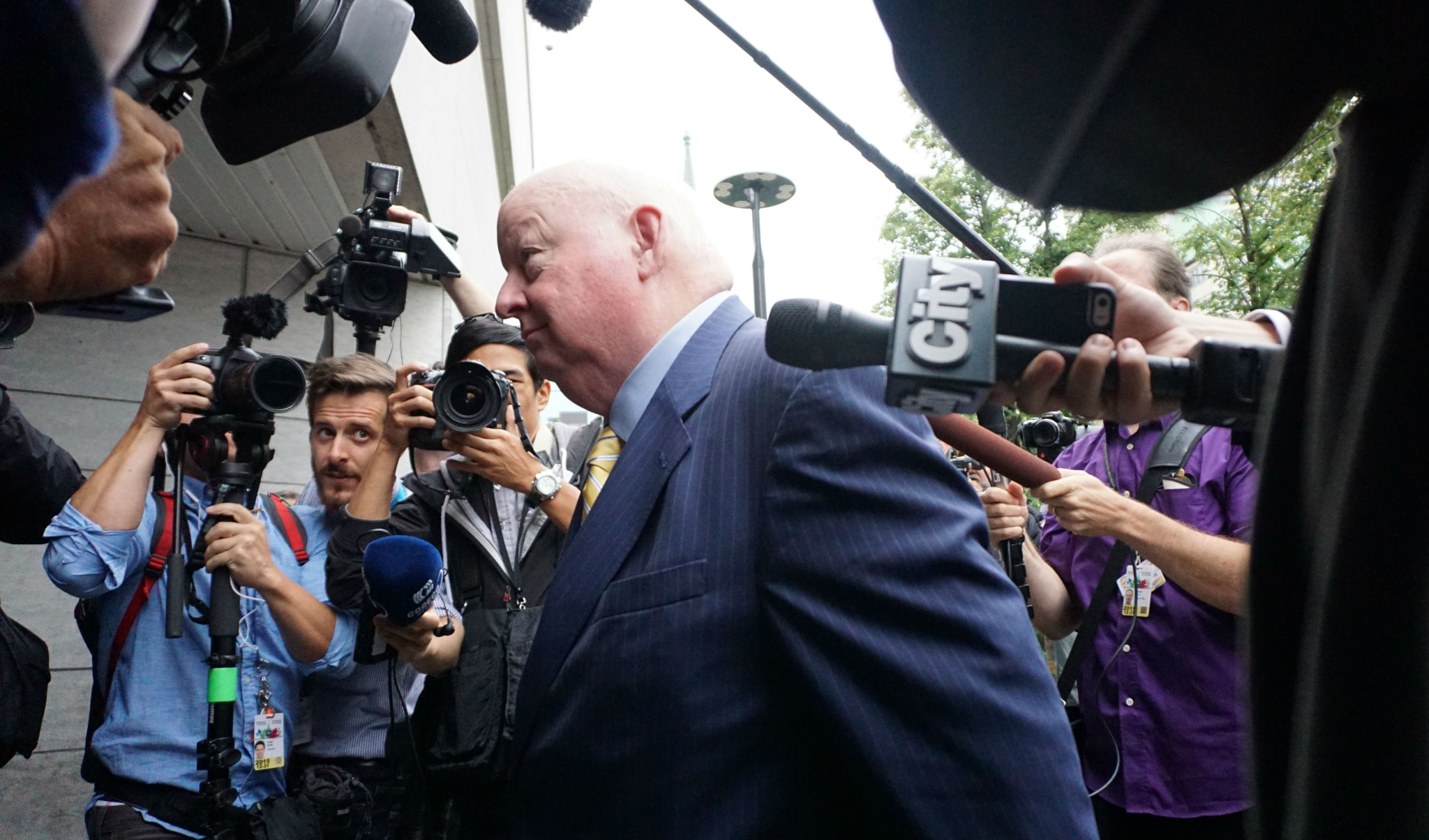 Mike Duffy enters the Ottawa Courthouse on the first morning of Nigel Wright's testimony against him. Photo by Elizabeth McSheffrey.
Previous story
Next story

The journalists are here, the lawyers are here, and of course the trial’s stars — Nigel Wright and Mike Duffy — are here as well. The Ottawa Courthouse is packed today, but only 20 of 60 public seats in Courtroom 33 are reserved for reporters covering the trial.

Who is sitting in the remaining 40 seats? An assortment of concerned citizens including students, political enthusiasts and retirees. Many didn’t even make it into the courtroom and were swept into the overflow room as latecomers.

Ottawa resident Liz Waldron, 63, was one of those, who came with her husband to watch the trial. They arrived at 8:15 a.m., but were slapped with red bracelets for seats in the overflow room.

Why they came to watch the trial

“It’s totally curiosity,” Waldron explained minutes before the start Wright’s testimony against Duffy. “We live in Ottawa; it just seemed like an opportunity to see everything live."

The suspended senator’s trial began April 7, and Waldron was in court at that time as well. Duffy pled “not guilty” to 31 charges related to work and travel expense claims made as senator, and receipt of a $90,000 cheque from Wright to cover debt from fraudulent claims.

The trial resumed on Wednesday morning after a one-and-a-half-month hiatus, featuring Wright as the primary witness for the Crown’s prosecution.

Rick Kohler, 71, also sat in the overflow room, and though he didn’t attend the first phase of the trial, he said Wright’s testimony was too important to miss.

“I came to look at the rule of law and Canadian democracy at work,” he explained. “I don’t see it as an individual senator who’s on trial; I see it as the Senate itself.”

Kohler has been following Mike Duffy and Senate spending scandal every since the story broke. Regardless of whether Duffy is found guilty or innocent, he believes the outcome of the trial will have an impact on the future of the Senate, but not as dramatic of an impact as some might hope.

"That would mean a constitutional change, and in the current situation, almost impossible," he said. “They may clean up a few rules, which will be a good thing; a step in the right direction.”

Despite the fact that students are on summer holidays, very few youth attended the day's proceedings. Sixteen-year-old Vincent Daignault from Ottawa said he's disappointed more young people aren't politically-engaged, especially when criminal charges are mixed with the politicians themselves.

“I’m here for democracy to work, to make sure justice is delivered," he said from his seat. “I think youth should be more involved, and no matter what happens that doesn’t seem to be case. All of this reflects bad action from the Senate.”

Dan Montag, a middle-aged man from southern Ottawa, also attending Wright's testimony on Wednesday, said he doesn't understand why more Canadians aren't involved in local politics. The Duffy trial in particular is "inexpensive theatre," he said, so why not dip one's feet into the political scandal of the day?

"When one looks at history, someone often thinks of those times that changed things, and you wonder if this is one of those times," he said outside Courtroom 33. "Maybe it is, who knows? Given that’s it’s occurring in the midst of a political election cycle makes it even more interesting.”

Montag, like many other Canadians, will pay close attention to Wright's testimony over the next few days, paying close attention to the characters of the case, the perspective of the public, and how the outcome of the trial will impact public trust in the government.

The wrong trial in Ottawa

All eyes on Nigel Wright in Duffy trial