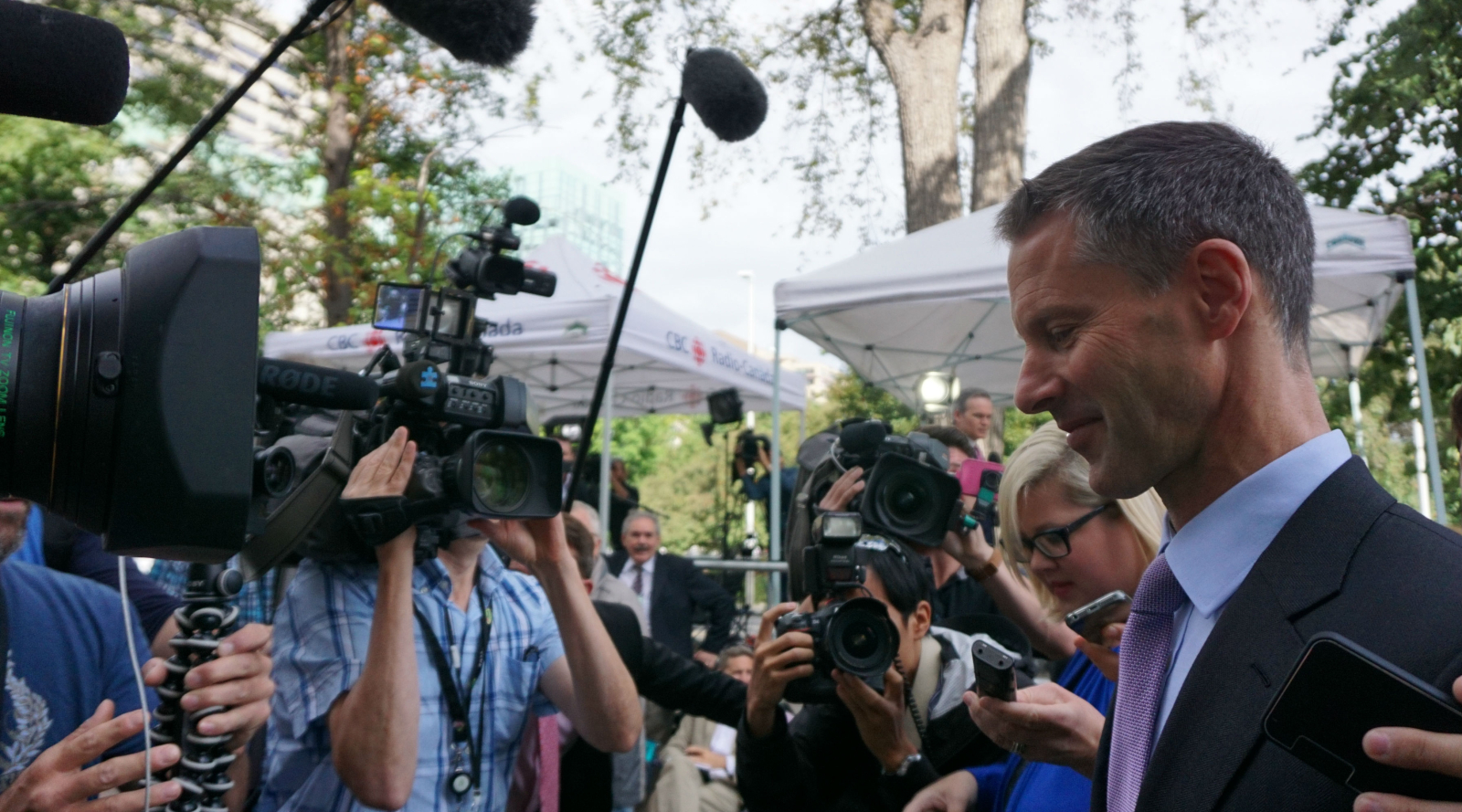 Nigel Wright faces an onslaught of questions from reporters outside the Mike Duffy trial in Ottawa. Photo by Elizabeth McSheffrey.
Previous story
Next story

It was a difficult morning for Nigel Wright.

The former chief of staff for the prime minister faced a second day of questioning as a primary witness in the Mike Duffy trial, this time from the senator’s lawyer, Donald Bayne.

Bayne, slow and steady in his cross-examination, questioned Wright about his responsibilities while in the prime minister’s office (PMO), his background as a lawyer, and his time as a speech writer for Ben Mulroney.

In doing so, he established Wright as a legally-savvy, loyal Conservative with a clear duty to avoid “political embarrassment” for the government with the goal of proving that despite claims under oath that his $90,000 cheque to Duffy was a “good deed,” Wright was motivated by desire to protect the PMO’s image rather than do right by Duffy and Canadian taxpayers.

In a July 2013 interview with RCMP, Wright said he “didn’t think we were going to publicize the fact that I paid,” and that the government would be “happy if people thought Duffy repaid.”

According to Bayne, this represents a classic “political damage control” strategy and an attempt to deceive the public, as at the end of the day, the money “Duffy repaid” came from Wright.

“It’s a deliberate, deceptive scenario,” the attorney claimed. “Your voter base, your Tory voter base… that’s concerned about probity and so on, they weren't going to like this if it came out that this was a bigger scheme, were they?”

When asked why he disclosed his payment to the public, Wright said he thought the public was better off believing Duffy paid, and he didn’t see it as a “scheme” at the time.

“I thought the important thing was that the expenses were reimbursed,” he told the court. “I did not attach the significance to my being the source of those funds that everybody else has.

“Clearly, that was not a great judgment by me.”

Still, Bayne argued that the tabled email exchanges show that Wright “forced” a man who believed himself to be innocent into repaying funds.

The witness didn’t deny putting “pressure,” on Duffy, but said ultimately, it was the senator who agreed to pay the funds.

Bayne promised to revisit these issues and more in the remainder of the proceedings, during which he hopes to prove Duffy is innocent in charges of bribery, fraud, and breach of trust.

Wright, who appeared more tense today in court than he did yesterday, has continued to insist that he repaid Duffy in a “personal and private” decision based on promises made to the senator that he would not have to front the money himself.